“Iron Man 2” is too busy to be compelling. 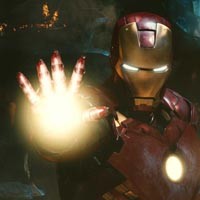 The first sequel in the “Iron Man” franchise has everything the original blockbuster had and more of it, including appearances by the director. There are more jokes, more fights, more characters, more stars, more everything. Is it any surprise that it turns out to be less of a good time? “Iron Man 2” has been manufactured to death.

Robert Downey Jr. returns as the rakish, egotistical Tony Stark, whose dominance as Iron Man he means to display at a yearlong expo. It is, when you think about it, a pretty apt metaphor for the movie, a carefully choreographed exhibition of entertainment, a perfectly pitched marketing exercise overflowing with stuff to look at and almost nothing worth remembering.

The movie picks up where the first one left off, with industrialist and notorious playboy Stark admitting he's the mysterious crusader Iron Man, declaring world peace to a cheering crowd and an angry Senate panel eager to get the government's hands on the suit. These two introductory scenes neatly epitomize the movie. The Senate hearings, jocular but pertinent, move the story along; Iron Man alighting on a stage packed with dancing fly girls doesn't. Expect to ride that seesaw all the way to the credits.

It's not long before “Iron Man 2” finds itself lost in the realm of most action sequels, amassing a bunch of new characters and plot lines destined to do little but dissipate into the promise of an inevitable third movie. Each plot is a plot to bring down Iron Man by one person or another, but none are particularly memorable. There's a heavily tattooed Russian physicist (Mickey Rourke) who wants revenge, a competitor (Sam Rockwell) who wants fame and fortune, and the U.S. military (represented by Garry Shandling in a welcome dose of realism) which wants what all authority figures want in movies like this: to kill the party.

Iron Man's conflicted best friend (Don Cheadle) and his worried girlfriend (Gwyneth Paltrow) want to slow Iron Man, too, although it's not completely clear why. Even Iron Man is trying to bring down Iron Man: A key piece of the suit begins to endanger its creator's life.

The idea seems to be if you keep adding new elements, no one will have time to analyze their relation or logic. In one lengthy scene Stark makes his girlfriend chief executive of the company. It takes him less time to invent a new element. Samuel L. Jackson shows up late as a major character with an eye patch and an explanation for why Scarlett Johansson has been bouncing around in the movie since the intro, besides the fact that her rear pushes the limits of Imax technology.

Jon Favreau directs again with the same taste for tongue-in-cheek action that characterized the first movie. The “Iron Man” series has retained its irreverent charm, but Favreau had an origin story to lean on last time, and even “Iron Man” began to run out of fuel as soon as that early portion came to a close. In this episode there's even less emotional involvement under the surface, though more than enough exotic locations and celebrities to admire. At one point we end up in Monaco for a Grand Prix race.

Smug works for Tony Stark, but it's a wearying pose for a movie to strike for two-plus hours. “Iron Man 2” is the epitome of a Hollywood entertainment created by committee, with multiple agendas operating in every scene, including plugs for other films and enough product placements to rival this summer's “Sex and the City 2.”

If you enjoyed the first one you won't be entirely disappointed, but the villains are only more generic and the story more clumsy the second time around. Downey's portrayal of a billionaire bad boy still has its moments, but the act already is beginning to wear thin. “Iron Man 2” has little else to argue for its existence besides more of the same postironic spin. It's entertaining moment-to-moment but feels dispensable overall.

Probably none of this matters very much considering what took place at the screening I attended. Waiting in vain for a reason to care about yet another loud comic book adventure transcribed to the screen, I overheard one of the excited young boys of the father sitting next to me whisper to his dad, “This movie is really cool.” With such champions, “Iron Man 2” is invincible. (PG-13) 124 min. HHIII