Image Control for the Jail That Isn’t 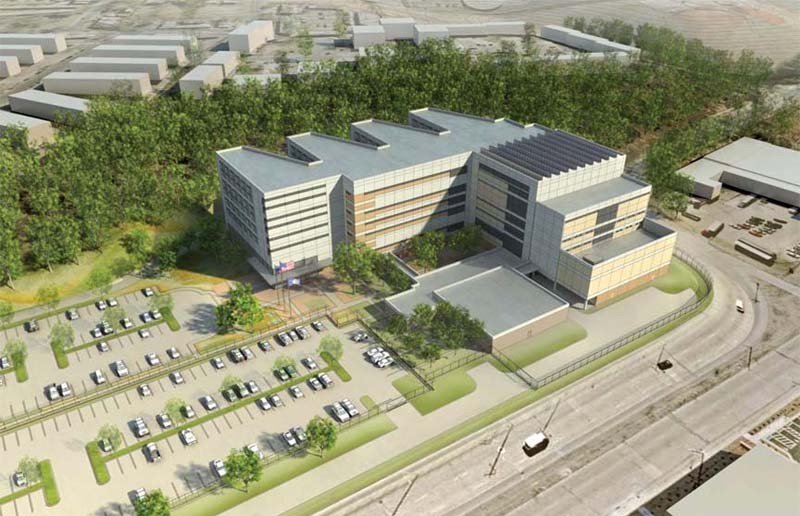 Details are a safe haven for the devil, and on a crisp, warm Saturday afternoon Mayor Dwight Jones is attempting to ferret out both.

Just off Oliver Hill Way, the smell of cooking grease fills the Freedom House’s Conrad Center, a soup kitchen across from the Richmond City Jail. The mayor is here with his chosen construction team to present the design of the new jail, which will cost $116 million, on the existing 6-acre site in Eastview.

Recasting the devil is tricky. Jones says the jail is really a “justice center,” and will have none of the attributes of the old, razor-wire clink. The construction team’s architect explains that it will be something positive, another calls it a “beacon of light.”

“What we want for this community is a facility that does not speak out and scream that this is a jail,” Jones says. “We don’t want any barbed wire. We don’t want any fences. … We want it to look like a nice office building that is an addition to the ambience of the community.”

It’s the first time Tompkins Builders and S.B. Ballard Construction have shown the proposed jail to Eastview. “Now we need to get down to the details,” Jones says. “And we know what they say about the details, don’t you?”

The details aren’t what interest the residents. After a 30-minute presentation, they want to know why it’s being rebuilt in an area wracked by poverty and crime, near struggling neighborhoods.

“Where it is located is not appropriate for the city of Richmond,” says Monica Marlow, who lives in Barton Heights. “It needs to be located where there aren’t neighborhoods.”

Architect Lawrence Williams, a former mayoral candidate, says putting the new jail in the current location will “lock in” the public housing around it for another 30 years. “We can never get these hilltops back again,” he says. The room breaks out into applause when Williams suggests moving the jail to an industrial location, perhaps off Bells Road on the city’s South Side.

As the meeting winds down, a fire alarm goes off. After a few minutes, as people head for the exit, City Councilwoman Ellen Robertson corrals them back. False alarm. Robertson, who represents Eastview in the 6th District, gives an impromptu, impassioned rebuttal.

In other words, the jail has become a bargaining chip. Build it here, but aggressively redevelop the communities around it. The city proposes a family-resource center, on Cool Lane, complete with job training and social services for low-income families. There are other plans as well, and more money, to be unveiled during the next few weeks. Robertson warns those in the room not to miss those details, and to pay close attention while the jail proposal weaves through City Council.

“If you don’t pay attention to the devil in the details,” Robertson says, “you are going to miss the devil.”