If Your're a Culture Junkie 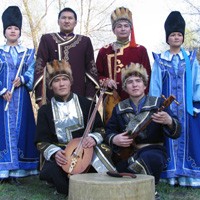 Your living room is filled with masks and photos from around the world. You sometimes wear a dashiki, when you're not in your sari. Sandals are your shoe of choice, and you carry your child in a papoose. You like your music with a helping of culture. You love weird instruments and your dream job is ethnomusicologist.

Sounds like: An a cappella video game and folk chorus combined.

Why you should see them: You want to see people making these sounds. Their "throat singing," a mix of different vocal tones and harmonies, comes from remote mountain villages and was virtually unknown to the Western world until 20 years ago.

Sounds Like: You should be sitting at a French café smoking a cigarette and thinking of something existential to say.

Why you should see them: They play traditional Quebecois music, which has been handed down for 300 years at family and village gatherings in the French-speaking communities of Quebec. Sung in French but influenced by Scottish and Irish music, the band includes a step-dancer, so you might learn some new moves.

Sounds Like: You should have a drink in a coconut in your hand.

Why you should see them: African slaves brought to work on sugar plantations were forbidden to play their own music and adapted to European instruments and rhythms. Now it's the official music of the Virgin Islands, called "scratch" because instruments were made from scratch. It was a way to convey news and messages of plantation life under the radar of Danish colonial rule. If you listen closely, you might learn something.

Sounds like: The music that should be playing while Indiana Jones walks down the street before he shoots the Arab with the fancy sword-work.

Why you should go see them: Armenian 'ud master Hagopian is an ethnomusicologist, so you know what you're getting is authentic, even if he was born in California. The 'ud looks like a lute and is used in Arabic, Turkish and Armenian music. Hagopian's specialty is Armenian folk and classical music.