In the weeks following former President Barrack Obama and former Vice President Joe Biden’s visits to Virginia to campaign in support of the Democratic ticket, more national heavy hitters have stumped for the three statewide candidates.

“This is the first statewide race since Nov. 8. This is the first election that is going to show America that we are prepared to get back on track,” said U.S. Sen. Kamala Harris of California in a speech at Richmond’s Blue Bee Cidery to a crowd of more than 100 people.

“We’re going blue!” someone shouted from the crowd.

Lt. Gov. Ralph Northam is running for governor, Justin Fairfax is running for lieutenant governor and Mark Herring is seeking a second term as attorney general. 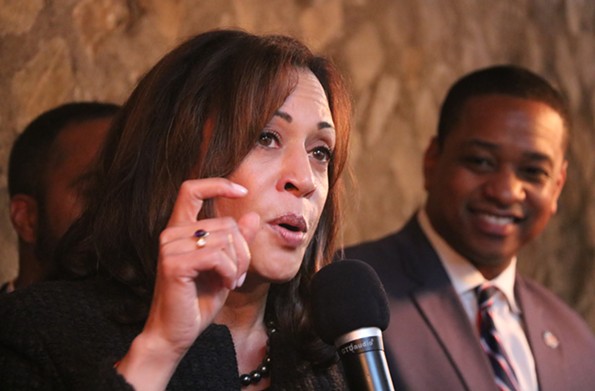 “I’m here from California because what you all do is the first step on that path to getting us back in the direction of fighting for and living for the ideals of who we are as a country. I know everyone here knows it. This is a reflection moment in the history of our country. This is a moment where our country is being required to look in a mirror and ask this question: ‘Who are we?’”

Harris cited causes such as standing up for Deferred Action for Childhood Arrivals, criminal justice reform and not banning transgender people from serving in the military as ideals worth fighting for.

“This a moment where the states and the leadership of states like the great Commonwealth of Virginia are going to make a huge difference in what we do to get back on track,” Harris said. “The future for this moment is in your hands.”

“That’s on the federal level and that matters, but on a day-to-day basis, who runs the states in this country really matters,” Holder said. “They can have the influence on all those federal issues that are of concern to us.”

With the statewide elections a week away, Holder urged people to spread voting encouragement as much as possible.

“If we’re going to stay true to who we are as Americans and if we’re going to repay the debt that we owe to people who gave us all the right to vote, you all will come out and you’ll make sure that your friends come out,” Holder said. “Democrats have the best answers to the questions that we face. We’ve got the solutions to the problems that we have to confront. We have a vision for this country—a vision for this state that is better than the Republicans. It’s up to you all to make sure that these people have the opportunity to implement it.”

With recent polls showing a tight race between the gubernatorial candidates in what has become a swing state, Harris and Holder hope to push Virginia into the Democratic column.

“When I did voter registration one of the main things I heard from people is that local elections don’t matter as much as federal elections, so I think it’s important that people see that crossover,” said Arianna Toussaint, who has served as a field organizer for Northam’s campaign as well as for Debra Rodman who’s running for the House of Delegates seat in the 73rd District. “I think when other people prioritize state elections it makes it easier for people in communities inside of those states to prioritize state elections.”