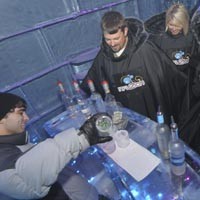 Infuzion, the nation's first ice bar and a much-ballyhooed addition to the Richmond club scene, is on lockdown after just eight months in business.

"We stretched it as long as we could," says the club's co-owner Paul Blacker. "A six-month construction delay got us in the hole, and it just never got any better. Closing was our only option."

The bar's ice lounge, where guests bundled up in parkas to drink chilled vodka, earned a mention in The Washington Post just days before closing. Now Wheeler, of Riverstone General Contracting, is trying to sell the club and its still-chilled contents to a new buyer.

Until then, the building is locked and under surveillance, according to a sign on the door, and Blacker's 12-year dream has liquefied. Wheeler didn't return calls by press time.

"I still believe in it," Blacker says of the concept, "but the timing just wasn't right. We felt there was a base for it, but opening in January in an economic downfall year was hard."