I Can Hear It Now

From electro rock to chamber music, you have myriad choices.

Pop/Rock
An abundance of musical goodness is on tap for Richmond and the surrounding areas in the coming months, with even more shows being announced daily as we embark upon the fall tour season. Here are a few solid picks to get you started:

Ex-Georgie James member Laura Burhenn recorded the Mynabirds' slow, Southern-churned disc, “What We Lose in the Fire We Gain in the Flood” under the influence of whiskey and Buffy Sainte-Marie records. Burhenn and the critically acclaimed birds come to the Southern in Charlottesville on Sept. 26.

Closer to home, Bloodshot Records artists Whitey Morgan and the 78s are at the Playing Field on Oct. 2. Morgan doesn't have the backwoods bio of a bona fide country music star since he calls Flint, Mich., home, but that boy can kick up a fuss just like Hank and Waylon.

Losing your edge? You can say, “I was there,” when LCD Soundsystem teams up with Brooklyn's buzz band of the year Sleigh Bells to bring the noise to the Charlottesville Pavilion on Oct. 2 and assuredly violate some kind of mountain-town noise ordinance.

The ever-evolving Richmond Folk Festival lineup already looks promising with the inclusion of the King of Nuevo Swing Donald Harrison and bluegrass twangster Peter Rowan. That's just a start — we recommend staying tuned to the festival's site at richmondfolkfestival.org for the final lineup. The Folk Fest, scheduled for Oct. 8-10 along the downtown waterfront, never fails to thrill.

Paste magazine named Sufjan Stevens one of the 100 Best Living Songwriters and he's been known to don a pair of ornately crafted wings on stage. Curious? You should be. The man behind the great “Illinois” CD will be at the National on Oct. 9.

The same night, the Triple Stamp Records roster comes together for a homegrown smorgasbord of sonic goodness at the Camel, with Anousheh Khalili playing her first local show in more than three years and a reunion of the Mermaid Skeletons. Also on the bill are Homemade Knives and the new Jonathan Vassar-David Shultz pairing, Ophelia.

It's been a while since the dynamic electro-duo Matt and Kim made a stop in the River City, but if a Oct. 21 appearance at the Canal Club is anything like last time expect to kick up your Chucks to some mad Casio beats and sweat till you're wet with Brooklyn's cutest darn band.

Ha Ha Tonka comes to the Camel on Oct. 24, but there's nothing to laugh at here. Remember when Kings of Leon didn't sound like tepid dude-rock and frolicked with raucous guitars and unpolished vocals? Yeah, these guys are kinda like that and maybe even a little better. Missouri-fried, foot-stomping indie at its best.

Metric snagged group of the year at this year's Canadian Juno awards, but Emily Haines and company remain nestled in virtual obscurity stateside. The band takes a break from opening for Muse just long enough to bring its synth-pop sound to the National's intimate confines Oct. 25, and it should be nothing short of astounding.

Whether she's fronting Rilo Kiley, flying solo or teaming up with Jonathan Rice on lo-fi, surf-rock songs with her latest venture, Jenny and Jonny, Jenny Lewis remains absolutely irresistible and worth a road trip anywhere within a 200-mile radius. Jenny and Johnny hit the Jefferson Theater in Charlottesville on Oct. 26.

Harpist, pianist, singer and songwriter extraordinaire, Joanna Newsom gets pissed when people call her distinctive vocals childlike and prefers descriptors that note Appalachian timbres instead. Catch the avant-folk performer's Nov. 20 show at the National and make the call yourself. — Hilary Langford 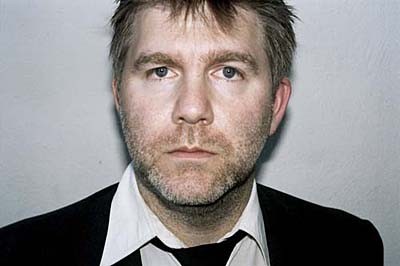 “This is Happening”: James Murphy of LCD Soundsystem.

Pop/Rock
The rising tide of small- and midsized venues in Richmond has delivered a remarkable depth of live shows for the fall season.

The leaves will surely turn on Sept. 15 when Kid Congo Powers, voodoo garage guitarist for Gun Club, the Cramps, and Nick Cave and the Bad Seeds, swings through Bandito's with his band the Pink Monkey Birds.

One of the first punks to go acoustic, 7Seconds front man Kevin Seconds will play the Camel on Sept. 21, along with a special set from Rob Huddleston and Thomas Barnett, both formerly of Inquistion. Barnett's current band, Strike Anywhere, will return to the storied stage of Strange Matter on Oct. 27.

Touring behind an eponymous new album, Elephant Six alums Elf Power will stop through Strange Matter on Sept. 22. Fluorescent costumes and human bowling are telltale signs of Japanese punk band Peelander-Z, which lands at the Camel on Sept. 29. Philly's Birdie Busch and her repertoire of quirky Americana can be seen at First Fridays In the Courtyard on Oct. 1, along with Richmond kindred spirits Zac Hryciak and the Jungle Beat.

Originally from Tel Aviv, Israel, but now living in Berlin TV Buddhas will hit the road for the first time in the United States with their protopunk-inspired rock, including a gig Oct. 12 at Strange Matter.

Apocalyptic accordionist Jason Webley, who plays in Evelyn Evelyn with Amanda Palmer from the Dresden Dolls, has set a solo date with Gallery5 on Oct. 15. Brooklyn dance-punk duo Matt and Kim, who built a loyal following here by performing in basements, will stop through on their national tour, Oct. 21 at the Canal Club.

Freeman, featuring current and former members of Avail, will release its first record Oct. 25 at Strange Matter. Local bloggers were atwitter after last year's show by the Intelligence, a lo-fi post-punk band from the Pacific Northwest, and the band will be back in Richmond on Nov. 1 at Strange Matter with local tropical noise rockers Bermuda Triangles. The official band of “Boondock Saints 2,” the Dirges, will raise a glass at McCormack's Irish Pub on Nov. 2.

In high school, the band T-shirt that all metal kids could agree on was Overkill. The legendary thrash-metal act is still going strong, performing at the Canal Club on Nov. 9. — Mike Rutz

Joanna Newsom brings her “Sawdust and Diamonds” to the National.

Jazz
It's been a slow summer for improvised music, somewhat mitigated by the national coverage given Fight the Big Bull's breakthrough project with David Karsten Daniels, some great small-scale performances — notably from newer bands such as singer Lydia Ooghe's Lux Vacancy and the UTV Chamber Ensemble. And, for those who prefer their jazz (mostly) smooth, the late summer jazz festival at Maymont.ƒ?_

The fall season opens with an appearance by edgy and innovative Chicago trombonist Jeb Bishop at the Camel on Sept. 10 followed by two very different events from Virginia Commonwealth University adjunct drum professors Tony Martucci and Brian Jones. On Sept. 15 Martucci appears at VCU with his straight-ahead quartet featuring renowned lyrical pianist Marc Copland, bassist Tom Baldwin and new jazz artist in residence John D'earth. The following night Brian Jones transforms the VCU Visual Arts Center into a kaleidoscopic sonic funhouse with his annual Musicircus, a transcendent happening devised by composer John Cage in which everyone plays whatever they want for exactly one hour.

October is even busier. Trombone virtuoso Jim Pugh headlines the VCU fall jazz festival, appearing with the both student orchestras, both now under the leadership of trombonists since program head Antonio Garcia has appointed trombone adjunct Bryan Hooten to head the second unit. The following night, Oct. 15, features the return of ebullient, limitlessly inventive and humorously unpredictable percussionist Cyro Baptista, who celebrates the music of fellow Brazilian Hector Villa Lobos at the Modlin Center.

The Richmond Jazz Society continues the Latin theme at the Capital Ale House downtown Sept. 21 with the Andes-to-Africa music of Gabriel Alegria and the Afro-Peruvian Sextet. The month closes with two major events: The Mingus Awareness Project — the Brian Jones-organized ALS benefit — returns after a year hiatus Oct. 24. One of the great, heartfelt and totally worthy events on the calendar, it has grown enough to be held at Rhythm Hall at CenterStage. Finally the all-star San Francisco Jazz Collective, an egalitarian ensemble featuring some of the country's best players — including McArthur Prize winner Miguel Zenon, vibraphonist Stefon Harris and drummer Eric Harland — appears at the Modlin Center on Oct. 27.

In addition to the big events there are the regular weekly gigs — including Butterbean at Bottom's Up Pizza on Sunday; John Conley at Davis and Main and D.J. Williams at CafAc Diem on Tuesdays; and the New Belgians at Cary Street and Beast Wellington at Bogart's on Wednesdays, which is also the night that Balliceaux tends to host such bands as No BS Brass, Ombak, Glows in the Dark and Fight the Big Bull.

The Camel continues to provide strong offerings, anchored by Brian Jones' regular third-Tuesday of the month gig — shifted to Sept. 28 this month to allow globe-trotting local trumpeter Rex Richardson to appear with Jones' Guitar Quartet.ƒ?_ Richardson is in town for his VCU faculty recital on Nov. 5. While the cost of premium student and faculty recitals has been raised to $5, these VCU events remain one of the great bargains in the city. — Peter McElhinney

Classical
The fall classical season opens Sept. 13 with University of Richmond artists in residence Eighth Blackbird. The title piece in the group's highly political Modlin Center program, “Powerful,” is based on a furious rebuttal of Igor Stravinsky's concept of art for art's sake.

On the following two nights the gymnastic modern dance troop Diavolo dances to modern composer John Adam's “Fearful Symmetries,” an eclectically playful piece that draws inspiration from, among others, Stravinsky. The serendipitous artistic contrast makes an apt start for a season full of scheduling collisions.

The opening concert of the Richmond Symphony (Sept. 25) features a program constructed around Beethoven's magnum opus Ninth Symphony. Fortunately for those who want to catch the intensely musical Claremont Trio at VCU that same night, the program is repeated on the 26th.  The Shanghai Quartet returns to the Modlin Center Oct. 1 with clarinet virtuoso Michel Lethiec.

A month after being criticized in the Eighth Blackbird program, Stravinsky fires back with “The Firebird Suite.” The Richmond Symphony program also features two Debussy piano pieces orchestrated by Ravel and the Rachmaninoff's Third Piano Concerto, which will feature a renowned soloist and VCU assistant professor, Dmitri Shteinberg (Oct. 16 and 17).

The Richmond Symphony and the Modlin Center join forces Oct. 22 for a premiere of composer Michael Colgrass' “Side by Side” featuring solo performances on piano and harpsichord by University of Richmond faculty artist Joanne Kong.

Those thinking about seeing the Virginia Opera Company's Richmond performance of Verdi's “Riggoletto” can either rush downtown to catch the tragic last act on the 22nd, or wait until the second performance on the Oct. 24. It could be a full weekend if you catch the VCU Mary Anne Rennolds concert on the 23rd, featuring piano master Charles Rosen and tenor Christoph Genz in an all-Schubert lieder program.

The Modlin Center plays host to a great chamber orchestra, the Academy of St. Martin in the Fields, on Nov. 7. And the symphony presents Charlottesville composer Judith Shatin's “Jefferson in His Own Words,” with narration by former Gov. Gerald Baliles on Nov. 14-15. The opera presents Mozart's lighthearted “Cosi Fan Tutti” on Nov. 26-28, while piano virtuoso and Van Cliburn winner Jon Nakamatsu performs at VCU on Dec. 4. — Peter McElhinney