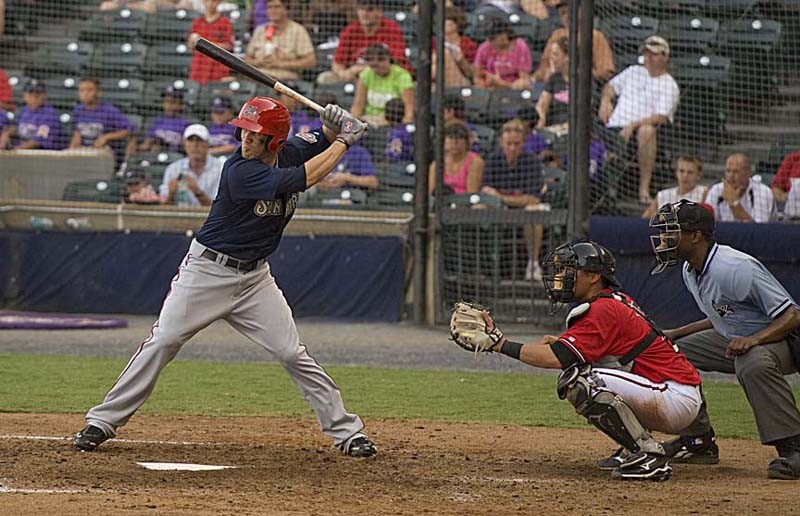 It’s Bryce Harper Weekend at The Diamond. But that’s mostly unofficial. Harper, the 18-year-old phenom slugger anointed for greatness by prognosticators from every corner of the baseball-covering press, plays not for the Richmond Flying Squirrels but for the opposing Harrisburg Senators. But the signs are there.

On this day, just before game one of the afternoon doubleheader July 22, weather trumps the hype. The temperature inside the park is more than 100 degrees during pre-game warm-ups. The humidity is even worse. The Squirrels front office will later report that the paid attendance for both games as 8,013. But during the first game, the stands will never grow beyond half-full.

Only a handful of sweat-stained fans — many of them wearing Washington Nationals’ apparel — crowd the third-base seats during warm-ups, hoping for some face time with the guy Sports Illustrated dubbed “The Chosen One.”

Not all of them are sold, however. Harper, playing left field, was promoted from the Hagerstown Suns, the Nationals’ Class A affiliate earlier this month. As he warms up nearby, Robert Boder and his family look on from seats near the third base line.

Fans since the Nationals’ inaugural season in 2005, the Boder family drove from Halifax County for the game and are regulars at Nationals Park in Washington. Sunburned with shaggy blond hair hanging from the back of a red ball cap, Boder remains unimpressed with the Harper’s work thus far. “He’s being moved up because he’s an attendance draw,” he says. “There were other guys on the team who were doing better that deserved to.”

Also, chimes in Boder’s son, Sean, “He’s represented by Scott Boras, who has ruined the sport of baseball.” It’s worth nothing that after taking Harper first overall in last year’s amateur draft, the Nationals signed him to a $9.9 million contract.

In the lonely upper deck, Allan Tudor watches as Harper lopes a single into right field during his first at-bat. Tudor drove in from Mechanicsville for the game. It isn’t often that a once-in-a-generation talent — or major league baseball’s Lebron James, as Sports Illustrated dubbed him in 2009 — graces a minor-league park, he says.

Tudor says he’s been coming to The Diamond enough to see his share of greats, specifically, David Justice and Tom Glavine before the two went on to star with the Atlanta Braves. And how would he rank Harper in terms of promise? “He’s up there,” says Tudor. “He’s young and still learning the position. Right now there’s guarded optimism.”