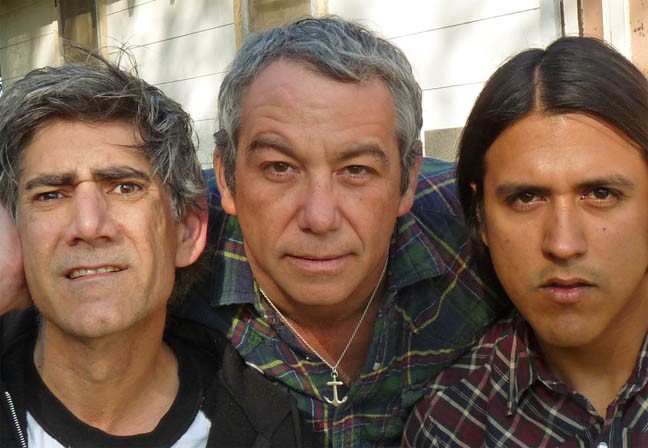 When Mike Watt plays bass, the gods of rock smile.

That's because "Watt" as he is commonly known, embodies and inhabits his instrument of choice, slapping and pummeling the fat strings, grimacing, sweating, but always with a mixture of childlike glee and a lifelong officer's sense of duty.

The son of a Navy sailor, Watt was raised in Portsmouth and Norfolk before moving during his teen years to San Pedro, Calif., where he formed his most influential group, the Minutemen. The band was an early proponent of the do-it-yourself approach to music and touring, helping establish a template for countless indie bands to come. If the band seems unfamiliar, you may have heard the Minutemen song "Corona," the theme for the MTV series and film franchise "Jackass."

Howard Wuelfing, a 12-year Columbia Records veteran who now runs his own publicity company, says that Watt pushed boundaries from the start.

"He quickly blossomed into one of the most technically adept players in the field," Wuelfing says. "But used this prowess to pursue artistic freedom — to play whatever came into his head whether it was pretty, ugly, crude or sophisticated."

Local music impresario Chris Bopst, a bass player himself, considers the Minutemen's "Double Nickels on the Dime" one of the all-time great punk records. Its influence could be felt in former Bopst bands from Richmond such as the SSTs, Alter Natives and in particular, Mao Tse Helen.

"He's the living embodiment of work ethic," Bopst says. "Bold, committed and driven in ways that make even the most tenacious of us look lazy."

At 53, Watt shows no signs of slowing down. His upcoming U.S. tour with his new band, the Missingmen, with guitarist Tom Watson and drummer Raul Morales, will cover 15,000 miles with 51 shows in 52 days. When I talk to him in San Pedro, he's about to leave for a tour of New Zealand and Australia with his other band, rock legends Iggy Pop and the Stooges.

"They're the original daddies of the movement," Watt says. "Captain Beefheart was a serious influence on the Minutemen, and Wire and the Stooges. I'm more a side mouse in the Stooges, but I feel like I owe them my best notes."

Rightfully so, they're the hall-of-fame band that provides him financial security by playing huge festivals around the world. Stooges' founding guitarist Ron Asheton died in 2009 and was replaced by former guitarist James Williamson, who Watt says is busy writing new material for the band.

On his own, Watt has an impressive array of projects in the pipeline as well as his own new label, Clenchedwrench records. Upcoming projects include a new album by his side group, Dos; an album called "The Sailor's Dream" recorded in Italy, an album recorded in Tokyo that features early rock critic Richard Meltzer's spoken words and three albums with virtuoso guitarist Nels Cline of Wilco. An album of new songs with Minutemen drummer George Hurley is in the planning stages.

"The closest thing I've got to children are these recorded things," Watt says. "They'll be here after I'm gone, so that's why I'm adding to them."

Lately he's been recording his recognizable bass lines for music sent to him online by musicians he doesn't even know, such as a recent 10-song demo from a Canadian guitarist named Steve Howe (not the Yes guy) and some guitar and drum tracks from a San Francisco band called Triclops.

"Coming from the old punk days, I don't care about big names, small names, styles. I'd rather go for energy and emotion," he says. "One thing I've learned getting this far: Everybody has got something to teach me. If I can put my bass in interesting situations, I'm going to learn how to work it better."

His upcoming East Coast tour will be in support of his third rock opera, "Hyphenated-Man," an album broken into 30 short, stream-of-consciousness songs (Joyce's "Ulysses" always has been a lyrical influence) that sound like raw Minutemen blasts but with Watt's guttural and slurred vocals. It was recorded in Brooklyn with Pere Ubu's bassist, Tony Maimone, producing.

"The songs are about me, meditating in middle-age mode," Watt explains. "Kind of a funhouse mirror, abstract in a way. I got the idea from the little creatures of Hieronymus Bosch. His paintings seemed like one thing made out of a bunch of little things — which reminded me of the Minutemen."

Always upbeat and positive, having survived an abscess of the perineum that nearly killed him a decade ago, Watt is excited to play his home state of Virginia, adding with a smoker's laugh that he plans to rock his hardest for us.

"I still remember the cardinals, crab apples and fireflies," he says. "Those things come alive in my memory whenever I go there." S

Mike Watt and the Missingmen perform with the Vacant Stairs and Horsehead at the Canal Club on Tuesday, March 29. The club opens at 8 p.m. and tickets are $10 in advance and $13 at the door.