A group of arts district boosters looks to get people downtown on other days than First Fridays. 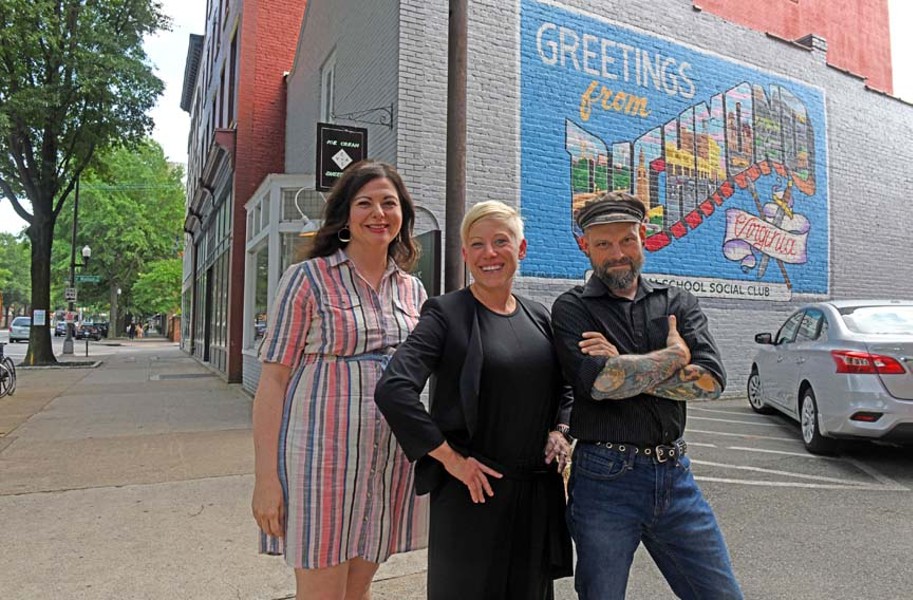 The Richmond Arts District, known as RAD, is ready for the respect it so richly deserves.

Leading the charge to build a growing, diverse task force team are members of the neighborhoods, creative organizations, businesses and nonprofits. Their goal, according to Parker Galore, one of the founders of Gallery 5, is to move forward while respectfully nurturing the vibrancy, history, integrity and growth of the areas that fall within the Richmond Arts District: Jackson Ward, Monroe Ward and the downtown Broad Street corridor.

The organizers are hoping that others will want to be part of the movement driving them to hold the city accountable for the programs promised in the 2014 Richmond Arts and Cultural District Incentives Plan, which includes support for affordable artists' living and work housing and facade improvement rebates.

As public liaison officer for the Downtown Neighborhood Association and coordinator of First Fridays, Shannon O'Neill's job is to nurture the monthly art walk, but what she'd really love to see is for the area to become not just a district, but a true community of residents, businesses and artists.

"We're not solely a destination. We have people who live and work here, too," she explains from Palindrome Creative Co., a woman owned design studio collective near the Maggie Walker monument. "An arts district should be a hub of creativity and space where people come to engage in something creative. We'd love to be able to foster more activities that feed into this and bolster a sense of creative community."

Doing marketing for the district, Liz Kincaid sets aside her responsibilities with RVA Hospitality Group to work on increasing the number of people who patronize the arts district. Taking time from running five restaurants, Kincaid has gone door to door to meet others who've put down stakes in the area. As a board member, Kincaid worked with the city, other neighborhood associations and GRTC to secure funding for marketing initiatives like an arts district map, due out this spring, and lamppost planters.

"The more I venture out from my businesses, there more I'm impressed by the diversity and generosity of the community here," she says. "I think it's important to support them so that they exist tomorrow to create and make our city more vibrant."

All three agree that it's very much a transitional time in the arts district, and in Richmond in general. As out-of-town developers continue to buy up local buildings, the threat of Richmond becoming a homogenous Any City, USA keeps them energized, focused, and excited to work harder to create a thriving, inclusive community where people can live, dine, work, play, and create together.

"If we strive to have a well-rounded, balanced urban ecosystem, with the creative communities and others who have been here for years as the heart and soul, then we are doing it right," Galore insists. "It can happen, but there must be balance."

O'Neill acknowledges that while Richmond is experiencing an exciting energy, it can also become too focused on one idea, one vision of how we want the city to look and feel, when what makes Richmond special is the distinctive quality of its neighborhoods.
"There are so many ways to cross-pollinate," O'Neill says. "Having a vital creative community means having an arts district and community that we support as a city. One cannot really exist without the other. The First Fridays Art Walk is a good example of how Richmond can keep an idea going and growing and evolving."

Supporters say one way to support the district is by becoming a member of the Downtown Neighborhood Association, going to socials, shopping, working, eating or visiting the area. It's a chose-your-own adventure with things as varied as boutique hotels, cheap eats, an internationally recognized hostel, recycled vinyl, remade fashions and rooftop bars.

"The area is overwhelmingly thought-provoking with its art and a definite socially conscious mentality runs though the shops and nonprofits at all price points," Kincaid said.

With a strong cadre of artists, residents, business owners, developers, historians and urban planners in place, RAD is counting on others wanting to get on board to make real change and have a visible impact in the community. "There's opportunity to join the marketing, beautification or membership committees and meet people who are making a real difference, Galore says

For the committee-averse, O'Neill says lending an assist is as easy as coming down and visiting the galleries and businesses — a comedy club, a cidery, a used bookstore or a yoga studio — that line the district.

"There's always something interesting going on, whether it's a pop-up in a store or an exhibit," O'Neill says. "I always say First Friday is great, but there are six other days of the week and we're still down here and open to the public."