How Will Schools Handle Marijuana Legalization? 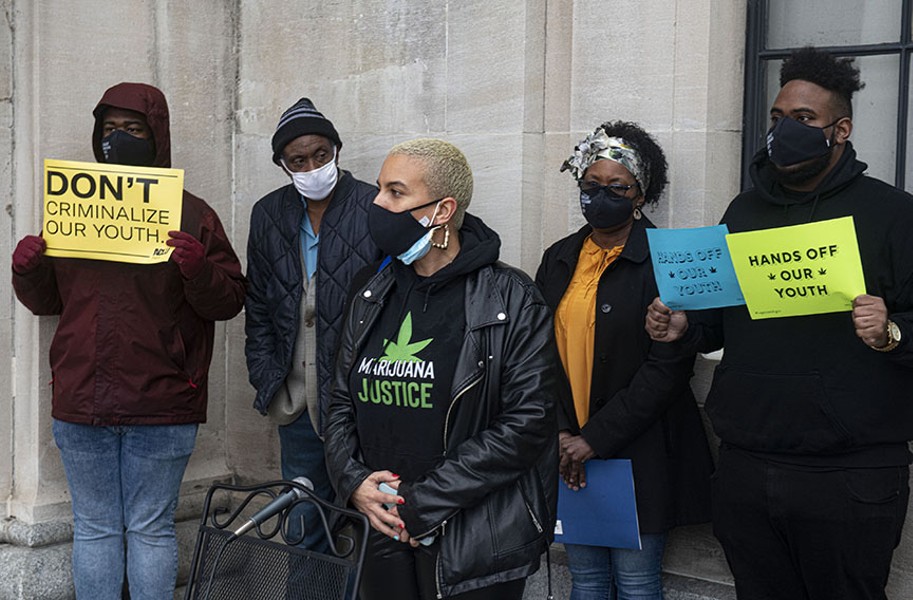 As marijuana gets the green light for adults in Virginia, social justice advocates say legislators neglected to write protections against inequitable policing of Black and brown juveniles for drug offenses.

The legislation also doesn’t go far enough to address the fact that minority students miss a disproportionate number of instructional days as punishment for school conduct violations, both advocates and legislators say.

Under the new law, starting July 1, a charge of simple possession on a public school campus would be punishable as a class II misdemeanor, which carries a penalty of as long as six months in jail, a fine of as much as $1,000, or both for adults. Juveniles may receive a fine of up to $500, possible jail time at a judge’s discretion and other penalties or interventions. The charge unfairly contributes to the criminalization of Black children, says James Braxton, engagement director for Rise for Youth, a Richmond-based organization that aims to reform the state’s juvenile justice system.

“Harsh penalties for possession at school will only fuel the school-to-prison pipeline,” he says.

Braxton and other advocates note that even though 40% of Virginia’s public-school students are Black, they represent 75% of school arrests. Last year, 121 students were arrested on school grounds or at related events in Richmond and simple possession of marijuana was the second-most-common offense with over 30 arrests.

School divisions need policies that “don’t introduce students to the criminal justice system because of marijuana,” says Jonathan Young, who represents the 4th District on the Richmond School Board. But legalization itself is “awful” and would signal to youth “that it’s OK to use narcotics and drugs,” Young says.

His concern that legalization would lead to widespread marijuana use by juveniles is shared by public officials in other states. Problematic use of marijuana by teens increased by 25% when states legalized the drug, a recent study in the Journal of the American Medical Association Psychiatry shows.

Under Virginia’s new law, the legal stakes aren’t as high for nonschool based marijuana arrests. In these instances, a charge of simple possession by a juvenile is punishable by a $25 fine on first offense and possible substance abuse education or rehabilitation, or both. That’s considerably less stringent than an earlier Senate proposal that would have set a $200 fine for the first offense.

But a fine of “only $25” would still inequitably penalize minority youth, says state Sen. Jennifer McClellan, a gubernatorial candidate who helped lead the push for marijuana legalization. She points to the $25 civil penalty for adults cited for simple possession put in place under decriminalization measures last year, which has fallen disproportionately on Black Virginians. The penalty is scheduled to end following the establishment of legal marijuana sales in the state by 2024.

White people are four times less likely to be cited for marijuana than Black people, since decriminalization went into effect on July 1, 2020, according to state court records. That’s despite health surveys showing that Black people use marijuana at about the same rate as white people.

Virginia is joining 15 states in legalizing marijuana, so it isn’t the first to consider how to handle juvenile offenses. Rise for Youth, Marijuana Justice and other Virginia advocacy groups that say that fines criminalize youth, praise New Jersey’s new policy, which removes penalties for juveniles in possession of the substance. Instead, a written warning is given on the first offense, parents are called for a second offense and youths are referred to intervention services for a third offense.

“We should not have these zero tolerance processes such as school expulsions,” she says. “And I did not feel that was part of the conversation this session.”

Richmond Public Schools recommends expulsion for students in school-based possession of marijuana in its code of conduct. Principals may instead choose to suspend students for 10 days for a first offense.

The district reconsiders its disciplinary policies annually and will do so next month. Officials could discuss how marijuana legalization impacts schools soon, says Jason Kamras, the Richmond Public Schools superintendent.

“We will ensure that RPS policies are aligned to state laws,” Kamras says. “We continue to be in support of efforts that end school criminalization and the school-to-prison pipeline.”

Whatever the outcome, the impact of marijuana legalization on youth will continue to be debated by school and government officials and advocates in Virginia, as it has been in states that paved the way for legalization.