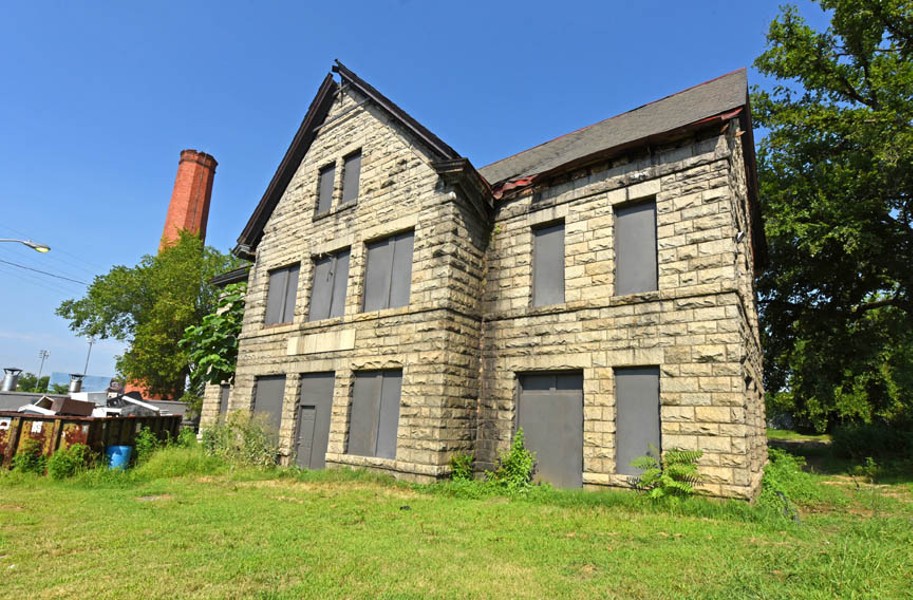 Scott Elmquist Industrial Hall, built in 1899 at the south end of the VUU campus, is one of the school’s original buildings.

To thousands of folks passing through the intersection of West Broad and Belvidere streets, the visually aggressive concrete structure taking sculptural form on the southwest corner is increasingly mesmerizing.

It will house Virginia Commonwealth University’s Institute for Contemporary Art, a newly minted organization that should add considerably to the burgeoning cultural scene when it opens late next year.

Only a few blocks away, on the campus of Virginia Union University, efforts to create another university art gallery also are ratcheting up. For a number of months, school officials, friends and alumni have been quietly and methodically making plans and raising money to convert the long-neglected Industrial Hall building into a modern exhibition and study center — which will house VUU’s growing art collection.

Like the ICA, the century-old, craggy, gray-stone-clad, decaying building with its brick smoke stack is visible to thousands of passersby daily — but to those zooming past on Interstate 95. What they now see as a glorious ruin should take its place as a cherished landmark after being restored and re-purposed.

The Industrial Hall is one of the campus’ original eight buildings dating from 1899. And what a beautiful campus it is — an impressive collection of late-19th-century and early-20th-century, castlelike Romanesque revival buildings arranged along a gentle knoll that rises from Lombardy Street and what once was Bacon’s Quarter Branch. The creek is now obscured by railroad tracks and the interstate.

The VUU campus was designed by John H. Coxhead (1865-1943), a Buffalo, New York-based architect who was born the same year the school was founded. Initially, classes were held in the former Lumpkin’s slave jail in Shockoe Bottom. Later, operations were moved to a hotel on Main Street. In 1899, VUU moved to its current campus.

The campus’ Romanesque-flavored architectural unity was interrupted in 1942 with a refreshing jolt of modernity. That was when the Belgian Friendship Complex was dismantled and shipped from New York, where it served as the Belgium Pavilion at the 1939 World’s Fair. Transported to Richmond via train, the prefabricated building was rebuilt on the Virginia Union campus under the direction of Charles Russell, a black architect who taught at the school.

The minimalist structure has served multiple purposes since, including as a library, gymnasium and now space for the fine arts programs. And the building’s impressive bell tower — minus the chimes since they were given to, and ring daily at, Stanford University in Palo Alto, California — is a North Side landmark, an architectural gateway to this part of town.

Since the Belgian Building’s arrival, additional modern buildings have been built on campus that have contributed to a relaxed and open feeling. Among the newer buildings is the 2006 L. Douglas Wilder Learning Resource Center and Library, at the southernmost end of the campus. It houses the university library, archives and an art collection.

The latter holdings, many of which are displayed in 3,200 square feet of exhibition space, were bolstered considerably in the early 1990s with the acquisition of numerous pieces of African and Oceanic art. Masks, sculptures, utilitarian carvings and textiles from West and Central Africa and Guatemala were gifts of collectors James and Barbara Sellman.

The couple also contributed an impressive collection of African-American folk art, including pieces by Thornton Dial Sr., a self-trained talent who was born in Alabama in 1928. Collections at Harvard University and the Metropolitan Museum of Art also contain his work.

The move from the Wilder building and into a renovated Industrial Hall will triple the university’s art exhibition space, bringing it to 9,692 square feet on three levels. The first floor will have a large gallery, a modest-sized lecture hall, offices, restrooms, storage and a catering kitchen. The second floor largely will be devoted to galleries, with the ability to subdivide the spaces into smaller display areas. The third level will accommodate art storage and perhaps studio space for an artist-in-residence.

Because the building interior was initially built with largely open spaces, interior gutting is unnecessary, adding cost efficiencies to the plan. The $3.7 million construction budget is being raised through private gifts. A $2 million endowment also is being established.

And while the granite building will gleam in the changing daylight, so will its impressive red brick smoke stack, preserved artifact of the industrial age.

“While we have been focusing on STEM, a curriculum of science, technology, engineering and mathematics,” said Dennis Washington, VUU vice president for institutional advancement, “this new facility will allow us to also emphasize the arts to a greater extent — STEAM — for our students.”


As it restores Industrial Hall, Virginia Union might explore how it can leverage the building’s highly visible location next to the interstate. There may be a way to announce not only the museum, but also the campus itself. S