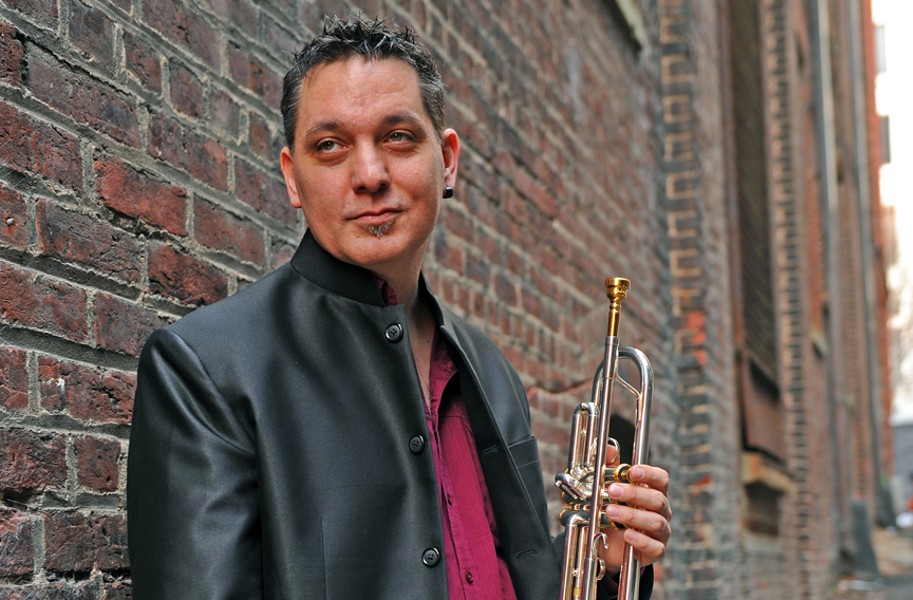 Scott Elmquist Music professor Rex Richardson is considered one of the best trumpet soloists in the world.

Rex Richardson is an artist at the summit of his career. It’s not that there’s nowhere else to go, but getting there requires building higher.

For almost 15 years the trumpeter has been the globe-trotting face of Virginia Commonwealth University music. As a soloist on stages on every continent except Antarctica, he’s represented the university — and his corporate sponsor, Yamaha Artists.

In performance, his technique is astounding, with a supple facility to follow a melodic line through a steeplechase of quicksilver runs and dizzying intervallic leaps. He’s one of an elite handful of people who can shape a few inches of air vibrating through a cunningly designed set of tubes and valves into concert-hall-filling artistry.

When he plays in such events as the university’s Symphonic Wind Ensemble on Nov. 29, it’s tempting to look at him as the romantic ideal of the creative artist, the virtuosic individual whose gifts set him apart from the orchestral collective. Look deeper, and it’s very much a team effort.

Richardson will perform three new concertos designed expressly for his talents. Funding for the compositions, and one not on the program, was provided by a $50,000 grant from the university’s presidential research fund.

“It has never been given out for a strictly artistic project before,” Richardson says. “I figured it was a long shot.”

His odds were improved by a champion in the arts school’s office of research, Sarah Cunningham, who shepherded his proposal through multiple revisions as it rose through department and committee review to final approval.

While the pieces are composed for him, the larger intent was to provide new repertoire for his instrument. Each composer featured in the concert — Allen Vizzutti, Anthony Plog and David Samson — takes a markedly different approach.

Like Richardson, Vizzutti is an internationally renowned trumpet virtuoso. His piece, Three Worlds Winds, backed by the Mid-Atlantic Wind Symphony, “is all about raw athleticism- range, technical ability, and stamina,” Richardson says. “These are all strong points for him.”

The five movements of Plog’s Concerto No. 3 for Trumpet and Brass Band are inspired by paintings by Russian abstractionist Wassili Kandinsky.

“The challenges in [Plog’s] work are more musical,” Richardson says. “He is very modern, but not abstract. There is a lot of tonal content, which pulls the listener in. I love the piece, but only if I play with the right degree of energy and commitment does it fully come to life.”

Richardson compares finding his way into a composition to Robert DeNiro disappearing into a character. “Duke Ellington once said there is no such thing as bad music, only bad performances,” he says.

Brass of the Potomac, a Washington based group in the English brass band tradition, provides accompaniment at the concert.

Perhaps the most daunting piece in the performance is Samson’s composition, Double Back. It’s a double concerto featuring as second soloist Joe Alessi, principal trombonist of the New York Philharmonic.

“He is one of the most legendary players in the world,” Richardson says. “And worth the price of admission several times over.”

The 18- to 22-year-old members of the university’s Symphonic Wind Ensemble will provide accompaniment.

“Their part is almost as hard as the solos,” says the group’s conductor, Terry Austin. “There is so much interplay between everyone; the melodic line is bouncing in 16th notes between Rex, Joe and individual members of the band. The tempos are manageable, it does not look hard on paper, but rhythm and time are slow to develop with young musicians. We have spent two months focusing only on this piece.”

Richardson credits Austin for sacrificing a Symphonic Wind Ensemble concerts to concentrate on this performance.

Austin compares the assembly of the work, with various reeds, brass and percussion ranging from tympani to flowerpots, to putting together a giant jigsaw puzzle — with Richardson’s and Alessi’s pieces— mostly missing.

“There’s not a beat in the score where you can relax,” Austin says. “But it is satisfying when it all comes together.”

Richardson’s role is unique, Austin says, not only at the university, but also in modern academia.

“He is the school ambassador, an artist-in-residence, and he still heads the trumpet faculty, does committee work and teaches,” he says. “I am not aware of any other place where a faculty member is encouraged to do all the things that Rex does.”

Richardson is open in his appreciation of the opportunity to do what he can do. As much as anything else, he says he’s excited about playing with one of his idols, working with the students, and being part of the university’s huge gesture of underwriting three important new works for brass.

“The guy can play,” Austin says. “But more than that he is humble and generous. Moreover, Alessi is one of the kindest and nicest people I have met. They just both happen to be monster musicians.” S

The Symphonic Wind Ensemble and guests, with Joe Alessi and Rex Richardson, perform at 7:30 p.m. Nov. 29 at Sonia Vlahcevic Concert Hall in the W.E. Singleton Center for the Performing Arts. Tickets are $10 general admission and free for students.