How to Open a Brewery: A Richmond Startup Goes From Ink on Paper to Malts in the Mash

I wrote about them for my December column and six months later, I decided to check in with the Prices, who are in the last throes of giving birth to their new business.

The air is filled with the smell of steeping barley, the tasting room manager is interviewing job candidates and furniture is scattered in stages of completion. As with other business owners, reality has modified Jason and Debbi Price’s original plans — but only a bit.

Twisted Ales is opening, as planned, in Blue Bee Cider’s original spot at 212 W. Sixth St. in Manchester, near Legend Brewing Co., with a five-barrel brew house and 10-barrel fermenters. As planned, the Prices doubled the size of the original tasting room to provide about 3,700 square feet for customers, and they’re still hoping to build a deck outside, pending landlord approval.

The couple was drawn to the building in part because of its early 1900s owner, Aragon Coffee Co. The interior brick walls whisper Richmond industry, as does the old freight elevator, which sports graffiti from a former Richmond band, Single Bullet Theory, that once practiced in the space. A rebuilt exterior door is reputedly made of boards from Secretariat’s old barn. Debbi hopes to add Richmond beer history memorabilia and subtle nods to businesses that previously occupied the building.

Last December, the Prices spoke of Twisted Ales as a family business. Turns out, other family members besides the couple will be involved as well. Debbi’s brother, Larry Sherman, is tasting room manager. Their 15-year-old son, Kyle, will be limited in his contributions — though not due to a lack of enthusiasm — while their older son, Ryan, will work at the brewery full time.

“Our 23-year-old has autism,” Debbi Price explains. “A big reason we decided to start a family business is to provide him with safe and stable employment.” 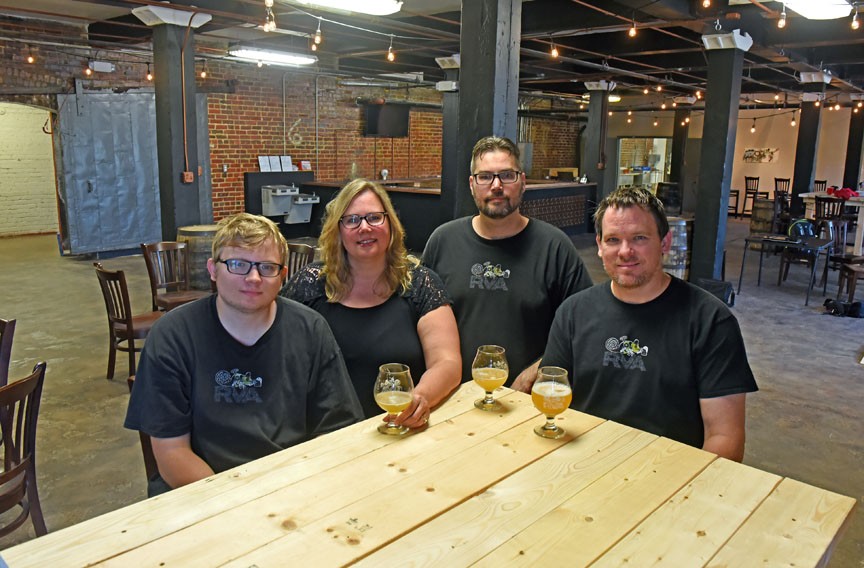 A recent post on the Twisted Ales Facebook page reminded them of the challenges ahead. A commenter took issue with an employee who failed to make eye contact or communicate when asked a question. The Facebook user was very apologetic when he learned that Ryan was autistic, but the Prices recognize the potential for other misunderstandings.

“We’re kind of glad that it happened, because it made us think about it,” Debbi says. They’re pondering the best way to approach the conundrum, counting on the understanding of most customers and recognizing the opportunity to educate the public.

Though many things the couple talked about in December are on track, other plans have changed. Jason and Debbi initially believed that customers would have an unobstructed view of the city skyline when the brewery first opened, but a new Manchester apartment building already has broken ground. “When we found out they were building the apartments in front of us, we were sad for about 30 seconds,” says Debbi. “Then we thought, ‘You know what? This is OK.’”

Jason agrees. “That’s a lot of customers.” And more Manchester apartments are on the way, with few other choices for food and entertainment nearby.

Other things are in the works. Noting the many cyclists in the area, the Prices plan to provide bike racks. And in addition to food trucks, they’re considering refrigerated snacks from a caterer, plus a weekly farmers market. Packaging and distribution are still in the works.

The intervening six months have also injected a dose of reality into the couple’s plans. “I really underestimated the amount of work this was compared to home brewing,” Jason says, “but it’s a lot of fun, and it’s all good.”

In December, Debbi told me, “Besides the tasting room and brewery, we’re looking to expand rather quickly, to take the beer national and international.” When reminded of that statement now, she laughs. “Oh, I was much greener then. That was the business-student [mentality]: ‘I’m going to take over the world.’” she says. “Then reality sets in.”

As expected, the beers focus on hop-forward ales, with other styles rounding out the lineup — and the names reflect steampunk themes and history. Devil Wagon, an early term for the automobile, is a red India pale ale, and Batty-Fang, an apricot pale ale. Jason calls Bang Up the Elephant — Victorian slang for perfect — a “New England-ish style IPA.”

By mid-June, only a month later than planned, Twisted Ales will open to the public. Only seven months after signing a lease — not too far off the mark, by any measure. S