How to Get Back into Summer

The sun is out, masks are down, normal is overrated. Here are five ideas to help reignite that summer feeling.

A year ago this week, Richmond marked Memorial Day weekend with a mix of anxiety, sadness, trepidation and a little optimism.

Virginia Beach had reopened, but the governor was chastised for being seen on the boardwalk without his mask.

Todd “Parney” Parnell, vice president of the Richmond Flying Squirrels, spoke of his tearful reaction to sports being canceled, but said he hoped the team would stay connected with the community through the year.

Venture Richmond called off its summer concert series, Friday Cheers, but its chief executive, Lisa Sims, said a decision had yet to be made on the Richmond Folk Festival – which eventually was called off.

Sports Backers reworked outdoor events into virtual competitions. By September, the group kept alive the popular Monument Avenue 10-K by stretching it out over several courses and three days.

Most theater and performing arts groups saw the curtain come down on their seasons, though some valiantly held online shows and creative fundraisers.

There was no Broadway in Richmond season. But Dolly Vogt, of ASM Global, which manages the Altria Theater and Dominion Energy Center, said at the time, “I can tell you, we’ll get through this.”

We did. There were rays of hope, schedule shuffling and new passions discovered when the quarantine bore down and Netflix streaming got old. We got outside a lot more, filling up Richmond parks and finding new favorite spots. But the roller coasters at Kings Dominion screeched to a halt, restaurants closed, people suffered. However you coped, it wasn’t the summer anyone wanted.

A year later, we face a new summer – potentially unmasked. Gov. Ralph Northam has lifted restrictions. Groups are meeting to determine whether to bring back their annual festivals. The theme parks are open. Restaurants are trying to staff up. A huge roster of concerts is out, reminding us that those exist.

We may have to relearn a few things that used to be second nature. But for the most part, Richmonders are ready to see each other in person and break back into summer – and for that we can be grateful.

Here are a few ideas for diving in.

1. Take Out Your Frustrations

Your options have broadened since ax throwing sliced its way into the Richmond market as amusement and friendly competition.

If you venture west of Short Pump you can find the Virginia Axe Co., which offers team building, group outings and birthday parties in a 3,000-square-foot space. Stony Point Fashion Park landed Stumpy’s Hatchet House, a franchise location that opened in May, with 10 throwing pits and a pour-your-own-beer wall.

If you need a little less precision and more crashing and smashing, there’s Rage RVA in the Fan. You can take a sledgehammer or other destructive tool to a room full of stuff waiting to get demolished.

Want to swing a hammer for a good cause? Brown’s Island is the site of Hammers & Ales 2021, a fundraiser for the Richmond Community ToolBank on June 12. Teams will roll up sleeves to build park benches and picnic tables. The payoff, besides, good works, is music from Andrew Alli & Josh Small, Prabir and Deau Eyes, with beer from Väsen Brewing.

Depending on your skill, there’s nothing like the sound of connecting your club with that little white ball. Richmonders have been enjoying a twist on the game of finesse at Topgolf, near Scott’s Addition off Westwood Avenue, and Drive Shack, at Route 288 and Interstate 64. Both options ramp up the social side of golf – because who needs a solo sport after all this quarantine?

If you prefer getting your dose of adrenaline a different way, try the Griffon at Busch Gardens Williamsburg. You catch a few heart-pumping seconds of hang time staring straight down before dropping 205 feet. It also plans to open a 73 mph multilaunch coaster, Pantheon, which the park says is the fastest in North America.

Kings Dominion is back, too, with five new shows. Its Soak City Waterpark opens June 19. The park also is playing up the Return of Grand Carnivale, which it calls an international celebration featuring themed food, drinks and entertainment, running July 17 through Aug. 1. 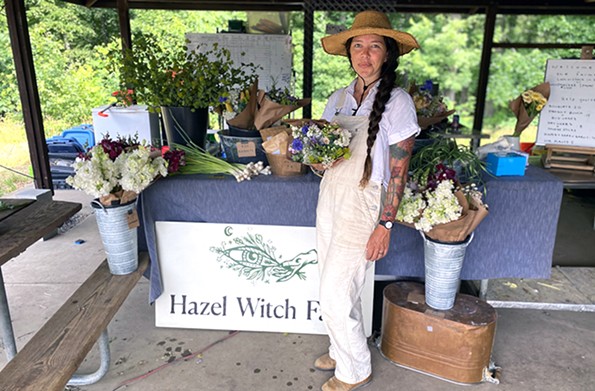 Lines at Sam’s Club. Groceries delivered. Getting to know your Amazon driver better than your neighbor. Now we can flip it around, and Richmond offers several options for getting out into the open and ramping up the freshness.

A little past Fort Pickett on Route 460 is Richlands Dairy Farm in Blackstone. Thank the cows while you pick up your milk and cream directly from the source. You can stay for the creamery. A recent menu featured your pick of six flavors in an ice cream flight for $8.50, served with homemade waffle chips. Keep watch for an annual Farmer at the Table dinner, where a chef serves up dishes with local ingredients while the farmers who grew them share their insight.

Speaking of outdoor dining, will the popular Dinner in the Field be back? Chef Paige Healy and her husband, Gregorio Spinzo, put the summer-night farm pop-ups on hold during the pandemic. While we wait on the return of this unique culinary experience, they continue to offer such dishes as eggplant parmigiana and tiramisu, shipped to your home.

You can get Hazel Witch Farm’s flowers delivered or pick up their herbs at Birdhouse Market. Or you can head straight for the 6-acre farm in Mechanicsville. Farmer Ash Hobson Carr, a graduate of art school at Virginia Commonwealth University, grows medicinal herbs, specialty flowers and heirloom seeds on land above the Chickahominy River.

Halfway between home delivery and the farm itself are farmers markets. Richmond offers plenty of options. The RVA Black Farmers Market has two more Saturdays, running June 6 and 20 from 8 a.m.-noon at 17th Street Market. The RVA Big Market has become a draw, taking up in Bryan Park. Dozens of vendors are out on summer Saturdays from 8 a.m. to noon. 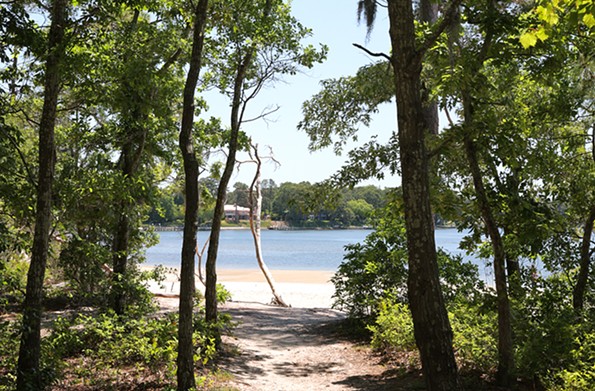 3. Shake Up the Sand

OBX stickers tell the tale. Richmonders can get in a beach getaway rut. But the pandemic has pushed a lot of people to try alternative ideas. Virginia has plenty of beaches you may never have considered. A few close enough for a day trip, within a two-hour drive of Richmond, include Buckroe Beach in Hampton, Cape Charles Beach on the Eastern Shore and Colonial Beach on the Northern Neck.

You’ll discover these options as calmer alternatives to beaches that draw more visitors, says Andrew Cothern, communications manager for the Virginia Tourism Corp. “Depending on where you want to go,” he says, “I think the relaxing atmosphere is probably the biggest draw.”

Some of them also offer a small-town feel, with mom-and-pop shops and independent restaurants to try, Cothern notes.

Many of Virginia’s state parks also offer lakeside beaches, including Lake Anna and First Landing State Park – which also can be incorporated into a longer visit to Virginia Beach. Steps away from the busy boardwalk, you can hike through First Landing’s serene, woodsy trails, watch for osprey and bring a towel to relax along Broad Bay. State parks also offer camping options for fresh-air therapy.

4. Breathe in the Arts and Culture

Performing arts won’t be back in full force this summer, but there are signs of life – most notably, the musical artists stepping onstage again. Friday Cheers runs through June. Innsbrook After Hours has a new location, transforming into After Hours Concerts at the Meadow Event Park [for concert picks, see page 15.]

The Black History Museum and Cultural Center of Virginia has its exhibit “Virginia Jazz: the Early Years” running through June 30.

The Valentine museum features an informal summer concert series at its garden, the Oasis, from noon-1 p.m. Wednesdays from June through August.

Juneteenth, which became a permanent state holiday last year, is June 19. Lewis Ginter Botanical Garden starts that morning with a Saturday Salutations: Juneteenth Celebration for All event with Project Yoga Richmond. Pocahontas State Park takes a unique spin with a history-themed storyteller and the Black Girls Hike RVA, an education trek into part of the park that once was segregated. Elegba Folklore Society plans programming to mark the 25th anniversary of its events June 27, with details coming that include performances, the Freedom Market and history at Richmond’s African Burial Ground.

Also at Ginter, Flowers After 5 blends live music with nature on Thursday nights from 4-9 p.m. Dogs are welcome on leashes the second and fourth Thursdays for Fidos After 5. You can bring your dog along to another park June 3, 5-8:30 p.m., for Mutts at Maymont.

Pocahontas State Park celebrates its 75th anniversary, and the 50th anniversary of Chesterfield Parks and Recreation, with a Richmond Symphony concert at its amphitheater June 5.

This summer marks the first time you can cheer on home teams up close and in person, with guidelines being relaxed.

The Richmond Kickers noted last week that they had played in front of the most fans in City Stadium since 2019. With soccer as a centerpiece, the team says it aims to make City Stadium a community hub. There are Friday Happy Hours with live music, craft beer and food trucks happening monthly, and a Carytown Farmers Market held Sundays.

Stands are filling up for the Richmond Flying Squirrels too, with Parnell noting that the Diamond and in-person games can be a part of the healing process for the region as things open. A new event there is the Richmond 34 Legacy Weekend on July 16-17, which marks the contributions of the 1960 sit-in at Thalhimers by 34 Virginia Union University students to protest segregation. Players will wear commemorative jerseys with a design by artist Noah Scalin and Marc Cheatham of the Cheats Movement blog. The jerseys will be auctioned after the game with proceeds going toward scholarships to support students attending VUU and Virginia State University.

Sports Backers is preparing for the Ukrop’s Monument Avenue 10k presented by Kroger. It will be held June 3-6 on courses in Byrd Park and Dorey Park. The group has also scheduled the Patrick Henry Half Marathon in Ashland for Aug. 28.

It’s almost certain that attendance will continue to climb in the James River Park System and along the popular Virginia Capital Trail.

Fireworks, alas, will be limited, with none planned along the river as in previous years with Rocketts Red Glare, or on Brown’s Island. We’ll hold out hope for Dogwood Dell or some city-sponsored sparks — somewhere. Watch for details soon, says Tamara Jenkins, a spokeswoman with Richmond Parks and Recreation. But the Flying Squirrels are sending up the rockets for several games, including “dueling fireworks” July 3 and 4.

Richmonders love their festivals, and news is sure to follow as decisions are made about what will return in summer 2021.