How Should Richmond Spend Its $3.2 Million Public Art Fund? 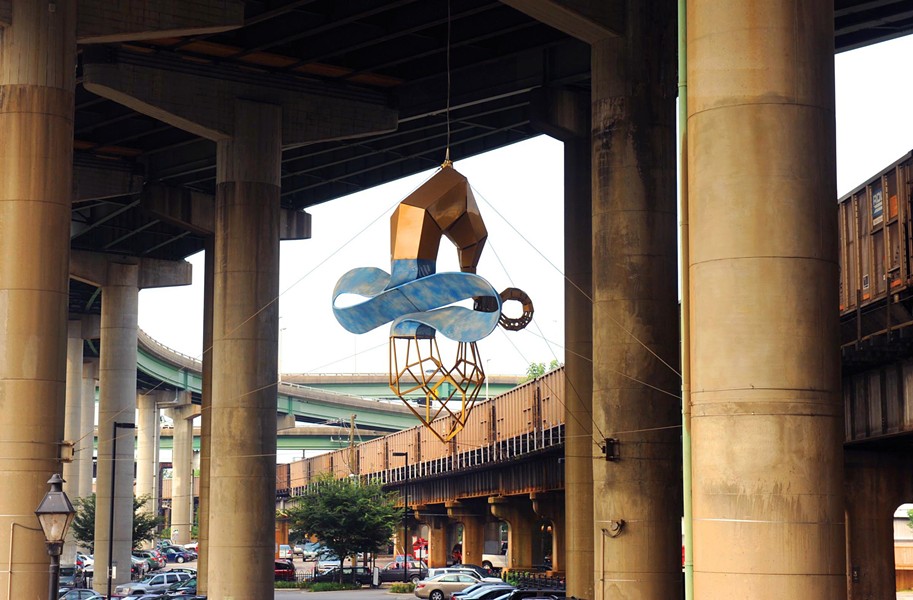 Scott Elmquist There could be much more public art across the city, such as the work “Skyrider,” a 2003 sculpture by John Newman hanging near Main Street Station.

Sitting on the biggest fund for public art they’ve seen in years, Richmond officials are trying to figure out how to spend it.

“The way we’re set up right now is that we’re very limited,” says Susan Reed, chair of the Public Art Commission. “We want to restructure the PAC to do new and different things, to have more flexibility in how we spend funds.”

In 1997, a city ordinance mandated that 1 percent of capital projects with budgets of $250,000 or more be dedicated to public art. But it restricted the types of art projects.

“We’re not allowed to do temporary art works,” Reed says. There’s also no provision for upkeep. When artists propose work, they are asked to list “cost and funding source” for maintenance.

But the fund ballooned when plans were approved to build a new city jail in 2011. With that $134 million project, and school construction costing upwards of $175 million, the public art fund has reached $3.2 million.

The infusion of money has prompted changes to where the art can go. Typically, the art went in and around the project that triggered the funding.

We try to stay near the project source, to stay in the community,” Reed says. “But we’re not going to spend this 1 percent from the jail all on site.”

So the commission is considering spreading the money among possibly three projects. It also agreed to the city’s request to use $300,000 for the forthcoming Maggie Walker statue at Broad and North Adams streets.

The process was “a little different from normal,” Reed says. But “it’s such an important project.”

The city also hired Ellyn Parker as a full-time public art coordinator in July and awarded a $150,000 contract to Gail Goldman and Gretchen Freeman to develop a public art master plan.

“Right now we’re in the research phase,” Goldman said during a meeting that drew about 60 people last week. “It’s all about community input.”

Goldman and Freeman are based in San Diego and Phoenix, respectively. But Parker is available to present and gather info in their stead. “Basically anybody with a group of five or more,” she says, “I will come to your meeting and collect ideas.”

And plenty of questions remain about how the funds can be distributed and dispersed. “Going forward this is all part of what the master plan can address,” Reed says. “If you have funding, you need to have a plan.” S