How Green is Richmond?

We talk a lot about greening the city. But we have no idea how bad things really are.

Environmental activists say local governments are trying to right their course. The comprehensive plans recently adopted by Henrico County and being discussed in Chesterfield County stress the need for mixed-use development. In the city, Mayor Dwight Jones has made sustainability one of his main platforms.

The mayor hired Alicia Zatcoff as the city's first-ever sustainability manager last year. She oversees the city's efforts to save money and energy in projects as wide-ranging as constructing green buildings, converting traffic lights to energy-saving versions and soon, installing an energy accounting system that tracks energy use building-by-building.

In June, Jones announced a green government order to make operations more efficient. This includes a plan to reduce fuel and energy use, an anti-idling policy for city vehicles, and measures to get 20 percent of the city's eligible work force to telecommute. Jones has also pushed hard to make Richmond a bike-friendly city by adding 80 miles of bike lanes and shared lanes.

"Obviously, this mayor has done more to advance Richmond down a path of environmental sustainability than anyone in the past," says Glen Besa, director of the Virginia chapter of the Sierra Club.

In late 2009, City Council established the resident-run Green City Commission to guide Richmond's sustainability efforts. Chairwoman KC McGurren says the group is beginning now to identify "an aggressive, very long-term, ideal, optimal scenario" for what the city can become, as well as the specifics: "How do we get there? What are the steps? ... What can we do right now?"

Richmond has no shortage of people and organizations that are trying to answer those questions. There are more cycling groups than you can shake a spoke at. There's Tricycle Gardens and Farm to Family, bringing local food to the people. There's the James River Association and the Friends of the James River. There's the James River Green Building Council and green-building group EarthCraft Virginia, where McGurren is executive director. "There's so many folks across the city that are doing great things," McGurren says.

But, she says, that also means "there are so many that I don't know exactly what they're doing." Causes often align — local food is related to community health is related to cycling is related to mass transit. "So it's all interconnected. And it's sometimes unfortunate that we don't have the ability to see that," McGurren says.

Hatcher with the Partnership for Smarter Growth echoes McGurren's thoughts. Finally, she says, Richmonders are beginning to understand how things like sprawl, water quality and transportation are linked. "I think right now we are poised for all the pieces to come together," Hatcher says.

The big question, she says, is: "Who's going to pursue the leadership toward the vision?" 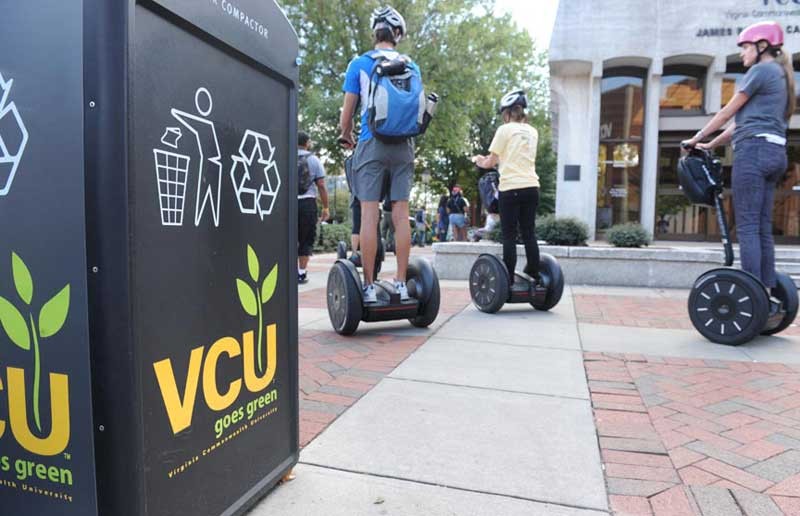 On one recent Friday, it's Sustainability Day on campus. Students are tootling around on Segways, examining a display of "conscious textiles" and signing a sustainability pledge — on iPods, naturally. Paper? So not green.

"This might be ground zero for sustainability," says Jacek Ghosh, an animated, fast-talking 61-year-old who is the university's director of sustainability.

It's tempting to think of VCU as a small-scale model for green change. The truth is, it's a massive system. The university has more than 200 buildings. The university plus its health system is Richmond's largest employer. The university's $895 million budget eclipses the budget of the entire city.

Its environmental impact is just as big. The university — not including VCU Medical Center — releases 127,000 metric tons of carbon yearly. It generates four tons of recycling alone every day. In the last three years, the university has replaced thousands of light bulbs, spent $3.2 million on solar panels, installed electric-vehicle chargers, begun large-scale composting and built only green-certified buildings, known by the acronym LEED, which stands for leadership in energy and environmental design.

The university's biggest goal is to be climate-neutral by 2050. And, Ghosh says, to be a model for the city. "We can be the greenest thing on earth, but if Richmond isn't — we can't have an oasis."

Corporations will have to step up, too. Besa says Richmond's biggest problem is "the dominance of unenlightened business leaders."

Groups such as the Sierra Club "can only influence public opinion," he says. "We can't make government investments. We can't make business investments." The true decision makers in Richmond are its corporations, he says, the businesses that employ Richmonders and benefit from the area's high quality of life.

Enlightened business leaders can influence government — or vice versa. But, he says, "in our case we have a dearth of both." Besa singles out Dominion, which he says has failed to make a real investment in renewable energy and creating green jobs.

Dominion disagrees. "We're doing what we can," says Tom Kazas, a spokesman for Dominion. In Virginia, Dominion has set a voluntary goal of deriving 15 percent of its electricity energy sales from renewable energy sources by 2025. Kazas points to "a number of green programs" the company has initiated, including statewide electric-vehicle charging stations and a smart-meter pilot project in Midlothian that tracks households' energy use. Just recently the company asked the State Corporation Commission to approve a new community solar program in which Dominion could lease rooftop space from commercial and public buildings for solar panels. These programs are statewide, however, not specific to Richmond.

In Charlotte, N.C., a city that could be Richmond's big sister, corporations are leading the charge. Charlotte — not a city known for being green — has recently set an ambitious goal to possess the greenest urban core in the country, an effort dubbed Envision Charlotte. To that end, major corporations including Duke Energy, Wells Fargo and Bank of America joined forces with city and county governments to cut downtown Charlotte's energy use 20 percent by 2016.

They're starting with a simple experiment. Large flat-screen monitors were recently installed in 65 commercial buildings downtown. Each screen displays a live feed of the watt-hours consumed each day. The number pushed 1 billion last Tuesday, equivalent to the power consumed by 1.25 million 100-watt bulbs left on for eight hours.

Several hundred showed up on a recent rainy Friday to watch the screens switch on. The hope is that people will not only reduce their at-work energy usage, but take the same practices home with them.

Why couldn't Richmond do something like power down its skyline at night? asks Watershed Architects founding principal and Sunflower Solar owner Patrick Farley. Sure, it would take a highly coordinated endeavor, he says — but it's essential to show people the link between the "massive nightly waste" of energy and the mountaintop-removal coal mining that makes it possible.

Real change will take a combination of grass-roots and top-down efforts, Farley says. Richmonders can't wait for their "so-called leadership" to tell them what to do: "I feel like we're getting policy-ed to death, in some respects." His philosophy is that more progress will be made if people begin changing their behaviors in a visible way.

Zatcoff, the city's sustainability manager, says changing individuals' behavior is probably the hardest task the city faces. Even if the city's taking specific steps to reduce its $22 million annual energy bill (based on 2008 figures) and cut its carbon output, she says, residents need to follow suit. "If it's just us doing it, it's not going to make much of an impact."

Why don't Richmonders do more? Some have a why-bother attitude, Zatcoff says. Others feel overwhelmed. But they seem to be willing. At the RVA Green Community Workshop, held in June, the city asked about 170 participants what they thought of various green initiatives.

• 85 percent said they were willing to make changes in their own lives to become more sustainable.

• 74 percent said they would be "supportive" or "very supportive" of a new system where Richmonders would pay a fee for every bag of trash they threw away, while recycling, food and yard-waste pickup would be free.

• 58 percent said they would take public transit if their employer offered an incentive program.

Richmond can't afford to wait until our energy predicament feels like an emergency, Farley says. "We should say, what would happen if tomorrow, gas prices were 8 bucks? Cause that's coming." The city should be emphasizing bicycles, mass transit, local food and energy reductions, to prepare its people "for a more challenging way of life," he says. Not to be alarmist, he says, but it comes down to this: "If you're not prepared, your chances of survival are maybe a little bit diminished." S