Roof Over My Head will manufacture durable, low-cost temporary housing. 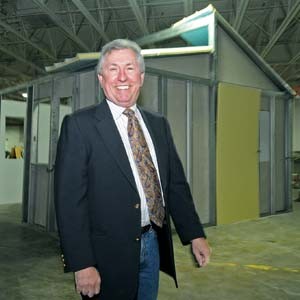 Nine months after an earthquake devastated Haiti's capital, life remains a daily ordeal for 1.3 million displaced people. Most of them remain homeless, living in flimsy tents. More than 250 have died in a cholera outbreak, spread by contaminated water, that began last week.

All the while, Haitians wait for the world to deliver more than $4.6 billion in promised reconstruction aid.

Too much money has been spent on Band-Aids, says Robert Rogers: “Tents. Tarps. Ropes. All kinds of B.S.” For just 1 percent of that $4.6 billion, he says, he could have installed more than 5,000 permanent houses in Haiti by now.

Rogers, the owner and president of River City Granite Co., is launching a company in Richmond that will manufacture and install durable, low-cost houses for people displaced by catastrophe.

Rogers intends to open the manufacturing facility in the 65,000-square-foot building on Chamberlayne Avenue where River City Granite is now located, and move the granite works to another location. Once big orders start rolling in and production ramps up, Rogers says, he expects to hire 300-plus Richmonders.

The company, Roof Over My Head, is getting its start with $4.4 million in Recovery Zone Facility Bonds, a tax-exempt bond created by the American Recovery and Reinvestment Act used to finance businesses in economically distressed areas. The bonds are approved by the city Economic Development Authority, but the city bears no financial obligation for them.

The biggest challenge is getting governments and nonprofits to start spending the disaster recovery money they've been sitting on, Rogers says. He's in talks with the Clinton Bush Haiti Fund, the William J. Clinton Foundation and the American Red Cross, among others, to make that happen.
Rogers, along with business partner Stephen J. Staats, decided to launch the venture after the Haitian earthquake. “Something needed to be done,” he says.

Architect Richard K. Morse of Cornerstone Architects, who is also a principal in the company, designed the 352-square-foot houses. They include overhead lofts and can each sleep nine people. The cost for one is around $9,000.

The houses are made of recyclable material from Virginia manufacturers, Rogers says. Each is constructed of 4-foot by 8-foot fiber-cement panels secured to a tube-steel skeleton, which would be anchored to a concrete slab. Even a hurricane-launched coconut flying through the air at 130 miles per hour “would not penetrate this,” Rogers says.

Soy-based urethane foam insulation keeps out the heat. Shuttered and screened windows — glassless — along with rooftop louvers, let in the breeze. The roof is made of corrugated metal insulated panels that Rogers says can resist hurricanes up to Category 3.

Six of the house kits, stacked flat, can fit in a 40-foot shipping container, to be sent overseas or carried by a tractor trailer. Once the concrete foundation is poured, Rogers says, it takes one superintendent and three semiskilled laborers to assemble the house. This team of four can build up to two in a day — and can disassemble the buildings just as quickly if they're no longer needed.