Three friends start a series that explores historic Richmond houses and their stories. 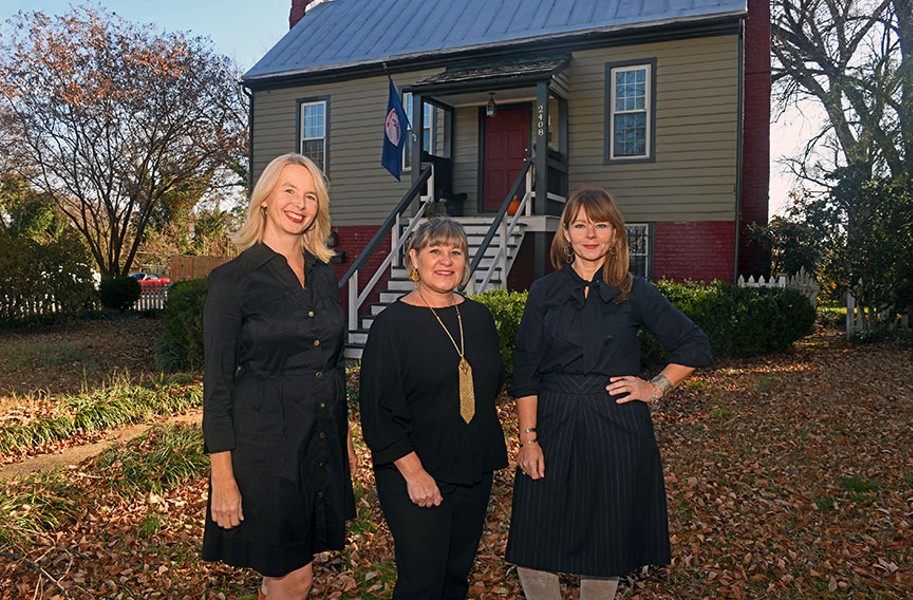 Scott Elmquist Kelly Trask, Kathryn Oti and Molly Todd stand in front of the historic Weisiger-Carroll House at 2408 Bainbridge St, which was built in 1765.

The best way to ascertain whether you’re a house voyeur is to go to a House Story event. There you’ll learn that it’s not the house, it’s the lives lived in it.

Imagine walking into an 1838 farmhouse that had originally been built on 25 acres in Henrico County before being moved to Broad Street and finally to Grace Street near Strawberry, a Greek revival-style house with a two-story wing added by C.F. Sauer in 1901. The kicker? Two weeks before his death, Poe had a public reading of “The Raven” in the front room by the fireplace. Decades later, when Vincent Price visited Richmond, he asked to visit the house so he, too, could read “The Raven” there. For House Story’s debut event, local poet Gregory Kimbrell read “The Raven.”

House Story was the brainstorm of Kelly Trask, Molly Todd and Kathryn Oti, friends since their children went to William Fox Elementary School together. Trask and Oti are both Realtors and when Todd, who works for the Martin Agency, hired Oti to sell her Sears Roebuck kit home, the trio discovered a mutual appreciation for not only kit homes, but house voyeurism. Two years ago, after countless conversations about how every house has stories, they launched House Story as a way of sharing their passion with others.

In February, a 4,500-square-foot Romanesque revival house on Hermitage Road was the subject. Built in 1898 with hand-cut granite columns and turrets, the graciously proportioned house was eventually bought by the Shriners and was destined for the wrecking ball until the neighbors stepped in to block its demise. Attendees got a gander at a Chinese wedding bed, a vintage travel poster collection and a library, complete with sliding ladder to reach the upper shelves.

“Part of our inspiration to do this was how so many old houses were being flipped with historical details being ripped out and lost,” Todd explains. “We wanted to find houses that had been updated for contemporary living without destroying the character of the house.”

All three women share a great appreciation for kit homes purchased through mail order, like the one Todd had sold. Last year, House Story invited house voyeurs to tour Hollybrook, a 1912 Gordon-Van Tine kit house in North Side. As kit homes go, this one was particularly notable for its grandeur and customization, despite having arrived by boxcar in 12,000 pieces and the owners having only 48 hours to pick it up.

Whether it’s the house’s historical significance, its architectural style or the colorful inhabitants past or present, House Story is all about the ways people live in their homes. The organizers ask the homeowners to decide how many guests they’re comfortable hosting and tailor each event to that. “The story of how people live in their house is the story of the time,” Oti says. “We welcome stories old and new.”

When they began House Story, they set up a suggestion box at events. It didn’t work. Instead, organizers rely on friends, neighbors and strangers, asking people if they know of a house with an interesting story or putting the word out on their Facebook page. Events are planned months in advance with notification via Facebook when tickets will be released. Often every free ticket is reserved within hours, so it makes sense to follow the group on Facebook.

House Story attracts all ages and has become a ritual for many house voyeurs. A group of five women make it their monthly girls’ night out with dinner following. A recent event was held on the 12th floor of the Prestwould Condominiums facing Monroe Park.

“Many people who came are young and they hadn’t been to a penthouse before,” Trask says. “We’re part of the community, so we want more people to come.”

Even for those who may not be acknowledged house voyeurs, House Story reliably delivers compelling stories. The gasps were audible when the owner of a 1912 Ginter Park house shared a tragic story that involved the original owner’s son sleeping on the spacious back porch on a muggy summer night in 1919. When the boy heard someone on the property, he grabbed a pistol and shot the man, only to learn it was his father’s friend. The man absolved the boy before dying at a nearby hospital, but who could look at the porch the same afterwards?

The group’s goal is to eventually become a nonprofit and have a small board, but not at the expense of how much fun they’re having organizing House Story events.

“This is a labor of love,” Trask says. “We’re doing it for ourselves, but we want to bring other house lovers along with us.”