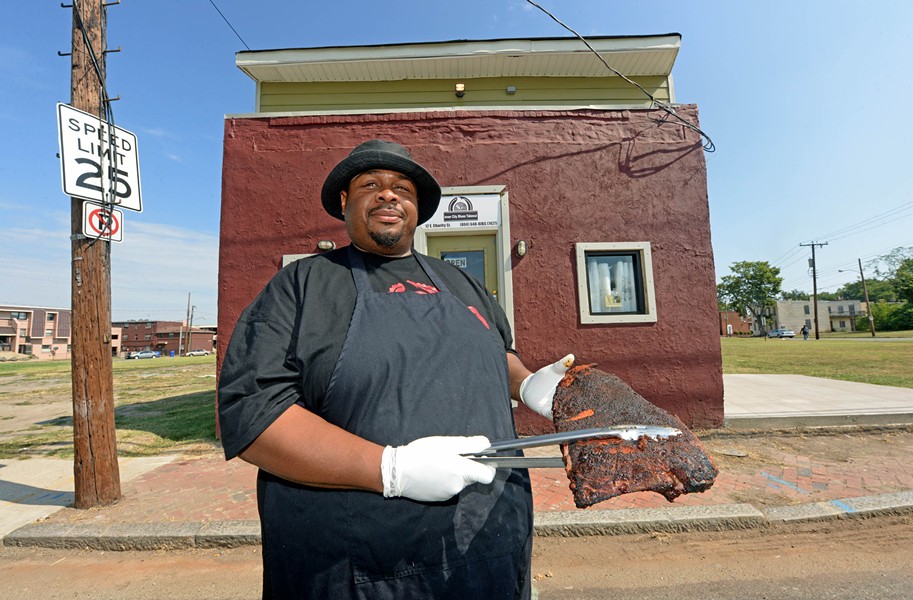 If inner-city blues made Marvin Gaye wanna holler, they made Alicia and Lamont Hawkins want to do something.

Their soul food and barbecue outpost, Inner City Blues, sits three blocks from the trendy Rogue Gentlemen cocktail bar, but a world away in perception. Those who deal in blanket generalizations have referred to the area north of Interstate 95 as the projects, but it's more accurately called north Jackson Ward, cut off from its southern half by the Eisenhower-era construction of the interstate.

The square, red building is just big enough for a kitchen and an ordering window, and stands alone in the middle of a grassy block, a block from Gilpin Court. It offers takeout only. I'm hoping there are picnic tables and umbrellas in the restaurant's future because there's plenty of room surrounding it. It would be a fine spot to wait for orders or enjoy them al fresco the way you can at Church Hill's Alamo BBQ or Union Market. Orders are taken by phone only until 6 p.m., because that last hour, from 6 to 7, is generally hopping, with customers lining up to get dinner before Inner City Blues closes for the night.

From the start, Lamont Hawkins made it known that his menu would be straight-up soul food — "anything with some love in it." That love arrives with crackling, crispy skin on fried chicken wings ($6), each wing large enough to elicit musing about the size of the bird that it might have come from. Paradoxically, whole smoked chicken wings ($6.59) are pieces — drumettes and middle sections — and are saucy, peppery and smoked until meat and bone barely acknowledge each other.

Hawkins does his thick pork barbecue sandwich ($4.99) North Carolina-style, piled high with coleslaw and hot sauce, a more piquant choice than the pulled chicken barbecue sandwich ($5.49). Smoked ribs, available in half or full racks ($13.99/$25.99), are touted as "fall off the bones" and the proof is in the satisfyingly messy eating.

If you like your meal in a casing, the beef Polish sausage with onions and green peppers ($4.25) is a solid, filling choice. As soul food custom dictates, the fish sandwich ($5.50), here made with trendy swai (a Southeast Asian fish similar to catfish), floats on a raft of white bread, a flotilla so long it requires a sausage container to hold it. Childhood memories of fried bologna sandwiches entice me to order a beef bologna burger ($3.50), a chunky, half-inch slice of fried bologna on a bun, but absent the cheese of my youthful lunches. Next time.

Order the cheeseburger ($4.15) if, like me, your taste buds recall fondly an era before gourmet burgers. Sure, it's the pre-formed patty kind, but its simplicity takes me back to every burger that I ate at a picnic as a kid. Potatoes outnumber crustaceans six to one in the shrimp basket and fries ($8.99), but the fries come dusted with a mouth-teasing, spicy saltiness that makes it difficult to stop shoveling them in.

In a nod to the brave, new world we live in, none of the side dishes ($2 for 6 ounces; $7 for 16 ounces) at Inner City Blues is cooked with pork. Vegetarian baked beans taste long-cooked but, most impressively, aren't overly sweet; collard greens shine with a boost from a squirt of hot sauce. Green beans sell out quickly, but both house-made coleslaw and baked mac 'n' cheese would have passed muster with my Richmond grandmother. All entrees are available as dinners with two sides and a roll for an additional $4.

Kids' meals ($3.75-$4.99) are available in three varieties, and I would be remiss if I didn't give Hawkins credit for choosing to serve them with only lemonade or iced tea, instead of sodas.

During the course of three visits, the service is welcoming, friendly and non-judgmental. Whether it's a grown man ordering a kids' hot-dog meal or a woman purchasing six full dinners, I've seen everyone treated with equal respect — and a smile.

Inner City Blues makes me want to holler, too, but mainly to let Richmond know that there's a little soul-food shack in a neighborhood you probably don't frequent that deserves support for doing the right thing. Part of that is location and part is serving food with a lot of love in it. S