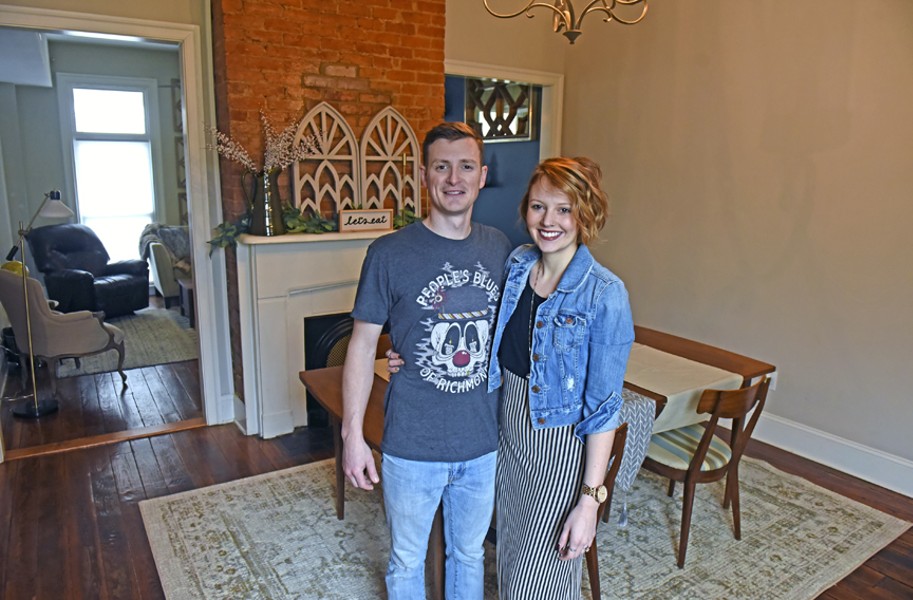 Scott Elmquist Local newlyweds Kyle and Rachel Lane were recently featured on HGTV’s “House Hunters.” After debating whether to go for midcentury modern or classic Southern, the couple bought and settled into a Church Hill row house.

Any HGTV fans in the house? In case you missed it on television, do a quick YouTube search for "Style battle Richmond," and enjoy the 22-minute video of a young Richmond couple featured on the reality show "House Hunters."

For those without cable, the premise of the show is straightforward: A family searching for a new home is filmed visiting three properties in a desired city, there's some element of suspense or controversy, and the final few minutes feature the subjects happily settled into the new forever home of their choice.

On this particular episode, originally aired Jan. 30, Chad Hunt of the Hunt Real Estate Team helped 28-year-old newlyweds Kyle and Rachel Lane search for a house after moving to Richmond from Denver. They viewed properties in the West End, Church Hill and north Chesterfield, and perhaps unsurprisingly, chose to purchase a quaint Church Hill row house — despite the fact that it had only two bedrooms (they originally wanted three) and minimal closet space. In one of the final shots of the newly decorated master bedroom, Rachel meticulously puts hanging and folded clothes into the massive wardrobe the couple bought to offset the lack of built-in storage.

"The space is definitely constricting, but that's part of the fun in the home, figuring out how we want to set up the furniture," Kyle says. "The home was built in the 1900s and people didn't have a lot of things back then, so there's not a lot of places to put things."

For the most part, the two-story house checked all their boxes. Walkability to restaurants and shops? Check. A spacious dining room for entertaining? Check. A garage and backyard for their dog, Jack, and pot-bellied pig, Todd? Woof and oink.

At the end of the day, Kyle says it was all about compromise.

"We both had exactly what we wanted in mind," he says, noting that she wanted Southern charm while he was more drawn to midcentury modern. "Be open-minded and don't settle, but understand there's potential to make it your own with what you buy."