Michael Moore talks about Bush, the war and the controversy over his new film “Fahrenheit 9/11.” 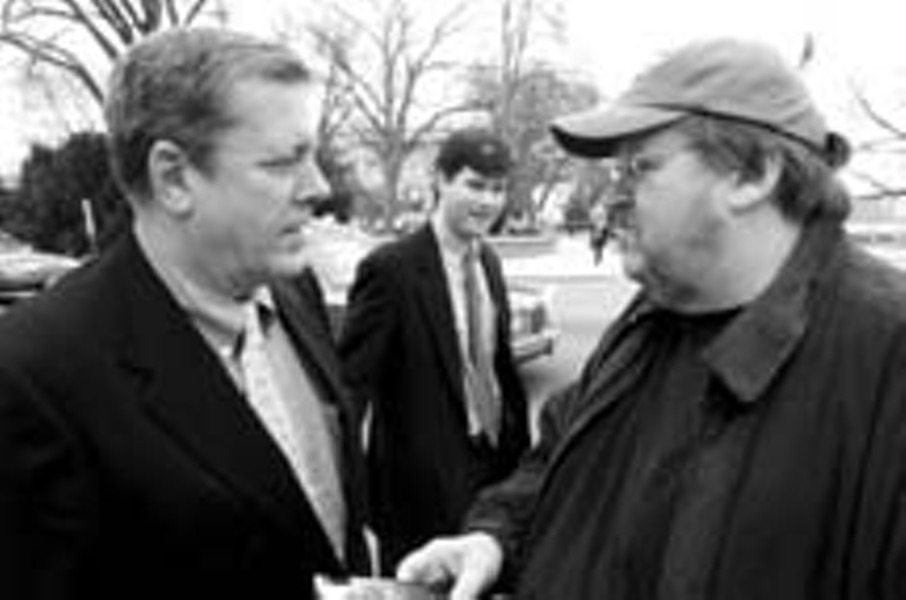 Using footage obtained from a variety of journalists and broadcasters, it contains disturbing images — many filtered, Moore says, out of the mainstream media since Sept. 11, 2001, when George W. Bush sat in a classroom reading “My Pet Goat” after the first jet crashed into the World Trade Center.

“Fahrenheit” offers just such a scene, and the film promises a firestorm of contention — from its graphic pictures from the war in Iraq, to American troops sexually abusing an Iraqi detainee outside the confines of Abu Ghraib, to the revelation that no member of Congress had read the Patriot Act before voting on the document.

I spoke with Moore at the Cannes Film Festival in May on the day the film premiered.

Style: What in this movie do you think will be shocking to the public, and what of that would be threatening to the U.S. government?

Michael Moore: Well, what’s going to be shocking to most Americans who see this film is Bush’s military records that were blacked out by someone at the White House. I don’t think people have heard American soldiers in the field talk the way they talk in this film of their disillusionment, of their despair, of their questioning what’s going on. Those were brave words to say to a camera. We have not seen that on the evening news. We’ve not seen the suffering that the war has caused, from those who’ve been maimed and paralyzed, to the families back home who’ve lost loved ones.

The good thing about Americans is once they’re given the information, they act accordingly, and they act from a good place. The hard part is getting through with the information. If the freelancers I was using were able to find what they found in Iraq, with our limited resources, you have to question, “Why haven’t we seen this?”

You see in the movie the first footage of abuse and humiliation of Iraqi detainees. And this occurred in the field, outside the prison walls. That is disgraceful, that it would take as long as it’s taken, and for me to come along with stringers and freelancers, to be able to bring this to the American people.

The American people do not like things being kept from them, and I think what this film is going to do is be like a mystery unraveling.

In your movie, you criticize the way the American public is manipulated with fear by the media. How do you manipulate your images?

We do a de-manipulation of the images. The media in America provide a manipulation. During the Bush years they put on a filter and they only allow the American people to see what they think will keep the waters calm. So night after night on the evening news, you’ll get maybe five seconds of George W. Bush where it sounds like he makes sense. In my film, I show the 20 seconds on either side of the five seconds where he clearly is totally discombobulated. In my film, I take the filter off, and you see it raw and uncensored and the way it really is. It’s both hilarious and frightening.

How do you get the clips of these uncensored moments that belong to networks?

We spend a lot of time digging in their archives. Another way we do it is there are people who work in media who don’t like the way the media is censored. So there’ll be a cameraman over here or a sound guy over there who knows that I would like to see something and will send it to me. We have a network of people who believe that the public should be given all the truth.

How do you think the White House has tried to prevent your film from being made and released?

I only know what I was told by my agent. We had a signed deal with Icon [Mel Gibson’s film production company]. We were just starting the movie and I got a call from my agent saying that he just got a call from a person at Icon asking for a way to get out of the deal, even though there was no way they could renege on it. They asked if there was any way we could get someone else to take over the deal because they received a call from “top Republicans,” people connected to the White House, who essentially wanted to convey the message to Mr. Gibson, “Don’t expect any more invitations to the White House if they’re going to be behind this film.” That’s all I know. I don’t know who made the calls, but we had this deal — there was a big thing in Variety about the deal — then suddenly, weeks later, the deal didn’t exist. Fortunately, Miramax immediately took over the deal and said they would make the film.

Since the agenda of your film seems to be to influence the outcome of the election in November, to what extent do you think a movie can accomplish that goal?

When I make any movie, it’s to make something that I would want to go see on a Friday night if I were going to a movie. That’s always the foremost thought in my mind. I wanted to say something about the times in which we live, in post 9-11 America, how we got to where we’re at, what’s happened to us as a people, and have a good time doing it. I also think it’s important to laugh during times like these and that’s why this film, like my other films, has a good amount of humor in it.

This time I was the straight man — Bush wrote the funniest lines, so what am I going to do when George Bush files a grievance with the Writer’s Guild wanting some sort of screen credit? In terms of “Will it influence the election?” I hope it influences people just to leave the theater and become good citizens — whatever that means. I’ll leave it to other people to decide what impact it will have on the election. S

“Fahrenheit 9/11” is scheduled for national release Friday, June 25. A Richmond opening date was not confirmed by press time.