Why King of Szechuan keeps pulling me in. 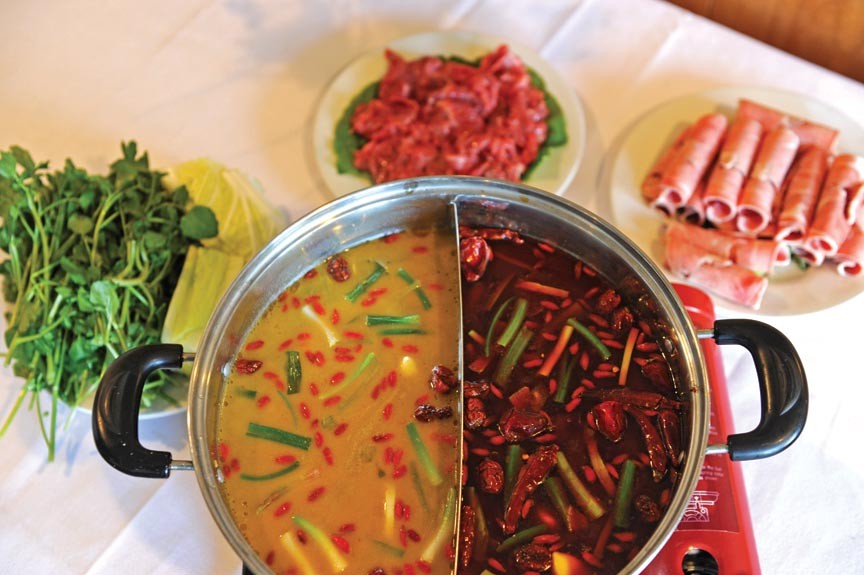 Szechwan hot pot is messy. If you're doing it right, your table is covered in plates with varying meats, tofu and vegetables. A little of everything has been dumped into the boiling bowl of broth in front of you, bubbling with many things that just don't look familiar. You eye the cauldron anticipating perhaps a scoop of spice, tripe, sliced beef and an errant bean sprout to sloppily shove in for a too-hot mouthful.

This sounds spectacular, doesn't it? It is. Having just made a lengthy trip to China, I was positively sick with excitement (and a little wary) when I heard there was a hot-pot place in Richmond. I rushed to try it immediately. Color me happy and frankly surprised that this rendition is worth applause.

In a place previously home to another Chinese establishment, King of Szechuan hasn't changed much in the looks department. The décor is the same. The tables are still clad in formal white cloths and topped with convenient Lazy Susans. The newness is in the food. And though there's some very solid Chinese food to be had at King of Szechuan, I can't stop my constant visits for its hot pot.

I'm partial to the half and half broth offering ($6). This is two broths boiling simultaneously in one large dish — one headed into serious spicy territory with chilis and garlic; the other, a more traditional broth that serves as a respite from its adjacent buddy's heat. I lean toward putting everything in the hot side but remember that things that boil ultimately reduce and that churning spice gets darker and angrier.

The choices next are many. On one occasion I try the combination of seafood ($9), a huge plate of shrimp, squid and fish, and find everything fresh and tender. The lighter broth adds to the sweetness of the shrimp and white fish. Another visit, I pick from the vast offerings of red meat. The spicy broth is made to be eaten with beef ($8), giving the tender sliced steak a flavor that could have come from lengthy marinating.

Vegetables come in what apparently is the only quantity that King of Szechuan serves — massive. I choose the mushroom variety ($5) on one visit and am delighted by how each mushroom adopts the broth with subtle differences, creating a kaleidoscope of taste. Chunks of tofu ($5) are perfectly suited for both broths.

If you're hell-bent on having a Chinese dish (like something served on an actual plate) while you're here, the salt and pepper ribs ($12.50) are a manly choice. Boiled daily, they're fatty and peppery. They're also often sold out. If your heart is set on them, call ahead. Though an acquired taste, anything that's served with bitter melon (you must request this — it isn't on the menu) is a big hit for me. If you're uncertain, it is bitter and has a texture like aloe, slippery and grainy. It's supposed to be downright life-changing for your skin.

Friends always ask me about authentic Chinese cuisine in Richmond. Where can you get it? Who has the best? Right now, for my taste buds, King of Szechuan is my only answer. S

Food and Drink King of Szechuan