Alexis Krauss of Sleigh Bells chants about yes, even jingles. 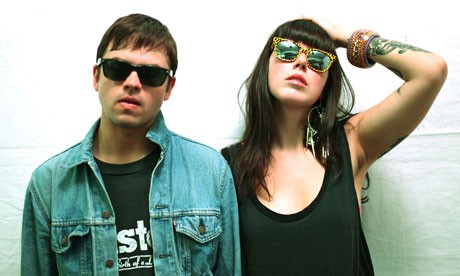 With eye-popping tattoos, good looks and one of the best albums of 2010 ("Treats"), Sleigh Bell's vocalist Alexis Krauss is your quintessential lady of rock. You would expect a bit attitude to go with that package, but the Brooklyn, N.Y.-based singer is hardly prideful. She still blushes when her now infamous commercial for Nickelodeon magazine is mentioned and swears that one day, she'll throw down the mic to get back into the classroom. Before she does that, Krauss promises to bring the noise for a few more years.

Style: Tell me a little about this upcoming tour with CSS.

Alexis Krauss: This is going to be our last tour in the U.S. for "Treats," so instead of doing a support tour with a bigger act we decided to play a show for our fans and have as much fun as possible. So, that's where the idea of co-headlining came about. Since CSS just came out with a new record and Derek [Miller] and I are such big fans, we thought the combination of us and them would be a really intense, high-energy show. We asked them to come along and they were down.

There's a lot going on sonically with Treats. How do you bring that sound to your live show?

We still play as a duo. Derek plays guitar and I do vocals. We do play our prerecorded track. People give us a lot of shit for that because they want to see everything done live, but it's not how we've chosen to do it for this record. For us, everything on the recording is so meticulous. Like the beats would be really hard to replicate with a live kit. I don't think it would translate nearly as well. We could throw somebody behind a DJ booth and have them spin our beats, but we're not. Really that's the same thing.

So, really what you are saying is that you guys are more akin to something like a hip-hop show or a DJ set so people should lay off?

Exactly. We are the first people to say our show is a mix between a live band and a DJ set. People who come to see a band play live and watch all the little chord changes and stuff won't be very fulfilled by our set. Our show is a total sensory, physical experience. It's interactive. We're not trying to be LCD onstage. That's just not how our lineup is.

Back to beats, you guys have to have been influenced by hip-hop in some way.

Definitely in the way that hip-hop possesses an energy during live shows. Odd Future is a good example right now. In terms of Derek's beat production, many hip-hop producers have had an influence on him. We're also influenced by pop and metal too. It's a mishmosh.

You guys also play with a lot of chants, anthems and cheerleader imagery. What's the deal there?

Well, I was never a cheerleader. I think the chanting is a lot like what you hear in punk and hardcore songs, the breakdowns and the sing-a-longs. The aesthetic of "Treats," in terms of the cheerleaders with distorted faces and me playing like this bad-ass school girl in the video for "Infinity Guitars" is really us just taking classic, American pop-culture and sticking a knife in it. The music is very much like that too. "Rill, Rill" is seemingly sweet hooky song, but it has this underbelly that talks about cutting you in the bathroom.

You've collaborated with M.I.A. in the past. Any future plans to work with her again?

At this point, no concrete plans or something we're actively considering. If it was the right song and opportunity, we'd be open to doing it though. We've been asked to do a lot of things lately as far as collaborations, but we've stayed kind of insular and focused on Sleigh Bells. We're prepping for our second album now actually.

What are your thoughts of the media's portrayal of the notorious M.I.A.? Blown up a bit?

Absolutely. A lot of what went down with her, the Twitter scandal and whatnot, was unfortunate because it was a distraction to her record which was an excellent record. Some of that bad media colored people's opinions of her. It's hard being an artist that is as independent, strong-willed and as uncompromising as she is. People want pop stars to say what they want them to say. She's super down to earth and her perspectives are refreshing, but you have to be careful what you say to whom and how to say it.

She was a huge supporter of you guys, right?

We had demos on MySpace and hadn't even played a show and she came up to New York and said, â€˜I really like you guys and I want to help you." There aren't many people in her position that would do that.

A handful of Sleigh Bells songs have been used for ads. Are you guys sellouts?

Put it this way. We've chosen to use our music to make a living. That's not something that we're embarrassed of at all. I'm not going to say we'll play every corporate gig that we're offered, but if someone wants to use our song for something and it makes sense to us, we're open to it. We're also open to as many people hearing our music as possible. I think it's obnoxious when an artist wants to keep their music exclusive and that only certain people are worthy of hearing it. A 10-year-old who hears our song on an MTV promo is as valid as someone who reads Pitchfork on a daily basis.

What's the deal with you guys having a Twitter page with no tweets?

That's Derek's world. I tend to be more engaged on Facebook. He'll tweet something ridiculous and then delete it. It's kind of a weird game he plays with fans now. People get it now and think it's funny.

Let's go back before Sleigh Bells. Your mom has been a huge contributor to your success. Talk to me about her.

You could say I wouldn't be here if it weren't for my mom. We were out to dinner and she initiated a conversation with Derek, who was our waiter. She talked his ear off. It wouldn't have happened if I had been with a friend, because I wouldn't have been selling my talents as a vocalist. But, she did. She wasn't bragging or anything. It was more like, "Oh, you're a musician? My daughter's a musician." It was all very natural. She was just being a mom and is responsible for the inception of the band. Early on, she would work nights so she could be available during the day to drive me in to New York City for auditions as a kid. Both of my parents are actually very supportive.

Was she cool with you leaving your teaching job to pursue the rock â€˜n' roll lifestyle?

How long had you been teaching and what subject?

I did a program called Teach for America. I was engaged in that for two years. I could have stayed in the classroom longer but, that was my commitment. I was teaching fourth-grade, English language in the South Bronx. I taught in Spanish and English. It was a struggling elementary school, so it was challenging but one of the best things I've ever done. I definitely think I'll end up back in the classroom later in life.

Growing up you went to a lot of hardcore shows. Do you still make it out to those?

I haven't gone out to one of those shows in a while. That was more like high school for me. I still have tremendous respect for hardcore as a genre, but I think people who are only listening to hardcore might want to expand their musical choices. Just like listening to any one thing.

It's about touring for this record and getting ready for our next one which should come out in spring of 2012. We're gonna be touring till August in Europe and then back in the studio. We're excited about the next record. Throwing ideas and early demos back and forth.

More of the same?

I think something pretty different without people scratching their heads and asking if it's by the same band that made "Treats," you know? A lot will be similar. The mood and tone is a bit darker and less dance pop oriented.

Which would you least like to talk about, your commercial for Nickelodeon magazine or your teen-pop sensation, Rubyblue?

[Laughing] Probably Rubyblue. Nickelodeon, I was so young I can talk about it. I was known as the girl in high school from that commercial and people would always wink at me. It's definitely come back to haunt me.