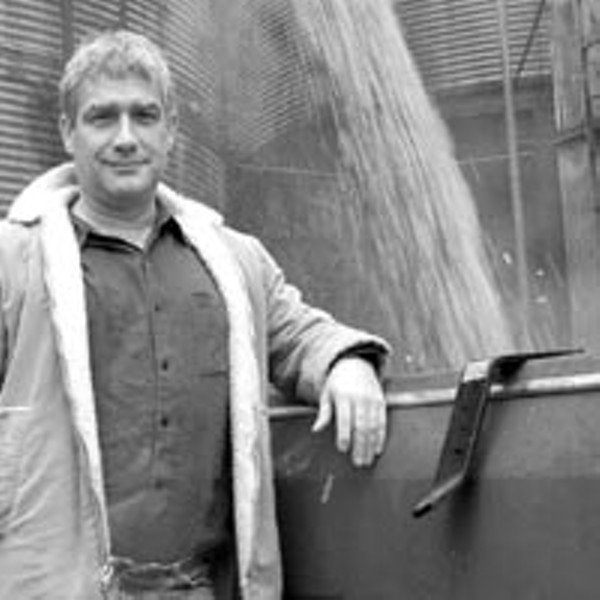 At the mill, the avalanche of kernels that spills into his truck isn't made from the sweet kind people eat. It's fit for chickens and pigs, though. Virginia's farm animals gobble thousands of tons of the cobless, shuck-free corn as feed. But Lavery sees its dried, golden potential elsewhere — namely, in people's houses and small businesses as a means for heating them.

Corn contains the properties of oil and ethanol, and when cooked, it becomes a clean, renewable fuel source. Agriculture and biological engineering departments at universities such as Virginia Tech and Penn State have Web sites exploring the subject. After all, the cost of fossil fuels continues to escalate, as do concerns about fuel pollution and the nation's dependency on Middle Eastern oil suppliers. Conversely, corn is homegrown and cheap, costing roughly $2 a bushel. In the coldest months last year, Lavery recalls, he spent more than $500 to heat his 2,400-square-foot Church Hill home. Thanks to his special stove that burns corn, he says, his heating bill for December was just $68.

Despite corn's earth- and pocket-friendly advantages, Lavery acknowledges the downside to its use as fuel: Most people either don't know about the process or don't know how to get the product. Even if they do, they likely don't have the proper furnace or stove to burn it. Consequently, Lavery sees corn's potential for heat as a business opportunity. Recently he became the first authorized dealer throughout Richmond and Petersburg for Snow Flame Corn Stoves and Appliances, a 20-year-old business based in Arden, N.C. His business card reads: "Cobb Fuel. Clean inexpensive heat." And his title, aptly, is "kernel." He offers stoves in three designs that range from $1,500 to $2,800. Last week he delivered one to his regular hangout — Jumpin' J's coffee shop in Church Hill.

"This is going to be my little showroom," he says. The stove is located just inside the door near a display case. Lavery hopes its curious look and "romantic flame" draw people to it as much as its heat. It's basically a blast furnace with an auger that turns, he says. Roughly two buckets of corn poured into the hopper a day can heat a space of up to 2,000 square feet. And while the stove easily fits into a fireplace, it merely needs a vent, not a chimney, to work. So far, Lavery says, he has sold about 10 of the stoves and a few truckloads of dried corn.

This could be good news to state and local agriculture interests such as the Virginia Farm Bureau Federation. "We welcome any use of corn that increases the market for farmers," says Greg Hicks, spokesman for the bureau. The bureau is conducting research on the alternative uses of corn and soybeans for fuel, he says, in hopes of expanding their value to consumers and growers.

Demand for corn has dropped in recent years, Hicks says, causing prices to drop and farmers to switch out of the drought-sensitive grain for more popular crops like cotton and soybean. Still, according to a report on 2002 data released last month, corn is Virginia's 10th largest commodity. In that year 305,000 acres were harvested, earning farmers $50.3 million from corn as grain. (This doesn't include the sweet corn grown for human consumption, which is minuscule, Hicks says, compared to that grown for feed.)

With corn in the hopper, Lavery could be on to something. As a home inspector in business for himself, he spent years out West in such places as New Mexico, where he became fascinated with natural resources and how they were readily used. Eight months ago, that curiosity made its way to Richmond — and to corn. He ordered a stove for himself. He decided to become a salesman. He hopes to establish the "infrastructure" necessary to create a market for corn as fuel.

"It's in its infancy," he says, "but it's becoming a part-time job real quick." Still, using corn for fuel isn't for everybody. For one thing, you have to buy the stove or have one that can be modified to burn corn. And although the stoves can be installed almost anywhere, they're best suited for hard-to-heat older homes such as ones typical in Church Hill and the Fan. Then there is the matter of the corn itself. It is, after all, animal feed. It readily attracts bugs and rodents, and must be kept in an airtight container. Nevertheless, Lavery is confident he'll find more takers.

Meanwhile he appears content to field the inevitable corny questions: No, it doesn't pop when it burns. Yes, it feels nice to put your hands in it. Indoors, there's no smell whatsoever. Outside, the scent depends on the weather, he says. "One day the clouds were really low and there was a fog. I walked outside and it kind of smelled like baked bread and popcorn." S