Scott Elmquist Shades of Cubism: The colorful new house at 3008 Grayland Ave., within a stone’s throw of the Downtown Expressway, provides a handsome and pleasing modernist contrast to its sedate Italianate-style and colonial revival neighbors.  It recalls the de Stijl or cubist movements in early 20th century architecture. Or perhaps something more recent: Squint, and the western brick wall, with slotlike window openings, recalls French architect LeCorbusier’s Ronchamp Chapel (1954). Trey Tyler was the architect.

Building cranes pirouette across the governmental and medical sectors of downtown. Dozens of mixed-use and ever taller apartment complexes rise throughout other parts of central Richmond. But surprisingly, the most eye-catching new structures in town are decidedly stealthy. These teases are the dozens of single-family or row house projects taking boxy form on individual lots that until recently were considered leftover. They are often narrow, or irregularly shaped tracts overlooked, ignored or considered just unworthy of development.

That’s no longer the case. Examples of recent and on-going home construction on unlikely sites are scattered throughout the Fan, Jackson Ward, Manchester, the Museum District, Springhill and Woodland Heights. But the most dynamic string of these often-boxy dwellings hugs an unlikely corridor: the Downtown Expressway.

You can hear the chattering class asking, who’s going you live there?

The answer? Many folks who find the appeal of brand-new homes that offer walkability and proximity to parks, bars and eateries, and casual shopping. The stark exteriors of the new single and attached houses on North Robinson Street and Idlewood Avenue, north of the highway and south of the expressway on Grayland Avenue near Byrd Park, are pleasantly textured with a pleasing mix of building materials. Inside and out, the designs are well-tailored with crisp detailing. Landscaping is thoughtful. And while aggressively contemporary from an architectural standpoint, each structure complements the scale of much older houses that tightly fill nearby blocks.

The expressway cuts through the Byrd Park neighborhood and the linear district just east of the Arthur Ashe Boulevard and south of East Cary. This residential swath was built during the first construction wave at the turn of the last century with the introduction of electric streetcars. Developers packed as many houses as possible along the established street grid. By the 1930s, automobiles became a factor and building lots became slightly larger and inner blocks and alleyways were developed for garages. Then, from the 1940s through ’70s, flight to the suburbs left these taut old neighborhoods behind.

Now, as Richmond’s outer suburbia has become denser, some older residents are forsaking the crabgrass frontier to join the millennial and zoomer generations back in town. As old row houses in these areas have been snatched up, retrofitted and successfully occupied, nearby leftover lots, some wild-shaped fragments from the expressway construction through the near West End in the 1970s are now hot properties. 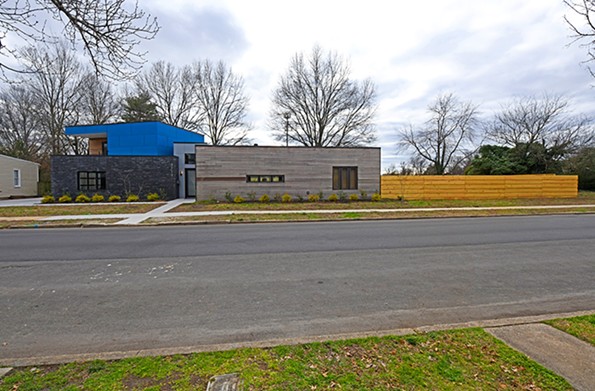 On the shallowest of lots hard against the north side of the Downtown Expressway, the two-story single-family home at 3119 Grayland Ave. includes a garage that is delineated on the exterior in black and a second floor living spaces defined in blue. A stretch of wood fencing assures privacy in the outdoor living area. The complex is just a five-minute stroll to the Carytown business district. 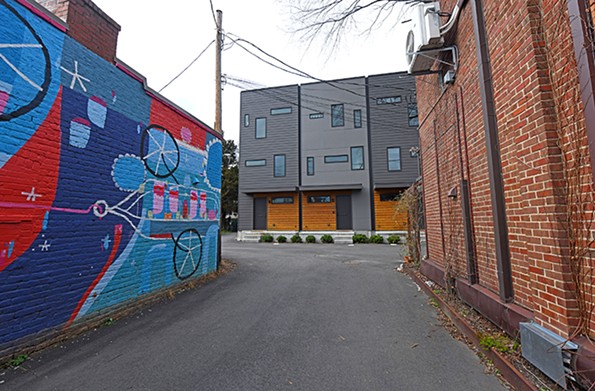 Who knew? Six architecturally crisp, three-story adjoining townhouses were wedged on a 1/8-acre lot in the center of the densely built block bounded by Robinson, Cary and Mulberry streets and Parkwood Avenue.  Each of the so-named A-2 townhouses, designed by John White of 510 Architects near the former GRTC bus barns in the 200 block of North Robinson Street, includes a garage. 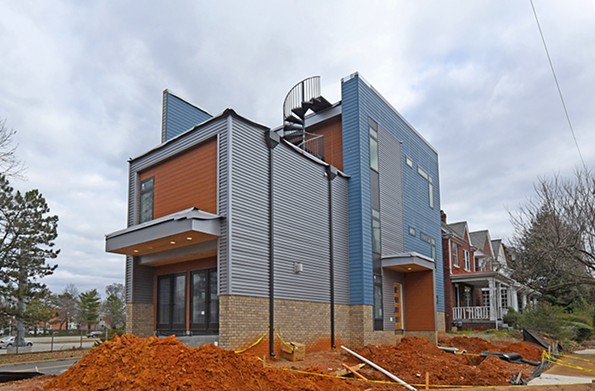 Up on the Roof

Tight against the south side of the Downtown Expressway, on a triangular lot defined by the convergence of Grayland and Idlewood avenues, a three-story townhouse crescendos architecturally with a spiral staircase that leads to a roof deck offering views of Byrd Park. Derek Mott was the architect of the meticulously articulated residence.