The clear plastic canister measures about 2 inches in diameter, perhaps an inch and a half deep. Writer and painter John Bryan, former president of Richmond's CultureWorks, sets it down on the table at Can Can Brasserie in Carytown alongside our morning coffee.

It's the kind of container for keeping a tiny treasure with big sentiment. A child's first lost tooth. An infant's carefully snipped, wispy lock of hair. Maybe a seashell found along white sands during a tropical honeymoon.

But what rests inside is something called Black Ant. It's a fishing fly, made for tying to the end of a featherweight line. It looks like a realistic, black winged insect, except for the hook that deviously extends from its tail.

A handwritten label affixed to the canister reads "Carter."

As in Jimmy and Rosalynn.

The Black Ant is the favorite fly of the former president and first lady. In an accompanying letter, Rosalynn writes:

The Black Ant was developed by George Harvey, a legend in the fly fishing field. He began the first course in angling at a university in the United States at Penn State in State College, Pennsylvania. We have been going to Spruce Creek, which is close by, to fish annually since 1987, and fished with George each year until he died in 2008. George taught me how to fly fish. Jimmy already knew how when we met him, but George taught him a lot, too. 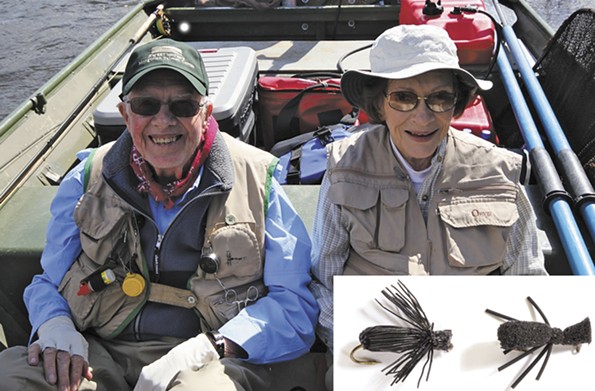 The Carters' favorite flies join 222 other thoughtfully chosen, colorful and quirky, beautifully arresting pieces of miniature art designed to soar through the air, hit the water and become irresistible to fish.

They make up a national collection that's been assembled during the last two and half years by Bryan and fellow angler Rob Carter, a renowned graphic designer and retired Virginia Commonwealth University professor. The two have been friends since 1981, when Bryan served as associate dean for development at VCU's School of the Arts.

They've fished together, and now they're publishing a book together — a passion project that's expected to ship this month. The 656-page tome of memories, stories, adventures, emotions, artwork and photographs weighs seven and a half pounds. It's a glossy stunner called "America's Favorite Flies."

The project started with 50 of those canisters, Rob Carter says, shipped out in 2015 with a modest questionnaire to an assortment of fly fishers across the country. What's your favorite fly? Why? Tell us a story, the pitch went.

"We didn't know if anybody would respond to this request," Bryan says. But word spread. Interest grew. They kept sending packets out, and they kept coming in.

There's the Black Brittermite, submitted by Gwar lead singer Michael Bishop. There's the Yellow Quill fly created by George Croonenberghs, and sent by John N. Maclean, the son of Norman Maclean — whose book "A River Runs Through It" is widely recognized as popularizing fly fishing across the country.

There's the fly that played an integral role in a marriage proposal, and a violet and indigo fly called Tissa's Strength, submitted by angler Lindsay Agness, tied in honor of a veteran who received the Purple Heart. There are flies by expert anglers and living legends in the sport, such as Joan Wulff and Lefty Kreh.

Singer Huey Lewis submitted the fly Huey's Downwing, named after him by a friend, Andy Carlson. "It replicates the 'Skwala' bug," Lewis writes — "a stonefly unique to our area — a spring hatch that is wonderful for big fish. It's very nimble."

On and on they poured in, Carter says: "It was a chain reaction."

My earliest memories of going fishing live beside Lake Arrowhead in the Shenandoah Valley, where Dad showed me how to watch the red and white floater, a kind of ping pong ball that sat on the water until a fish tugged on the hook from below.

That little dip was your cue to hook your fish and reel it in. You'd likely carry along a cup of soil with live bait inside. I recall watching my little sister pull the wriggly worms out and attach them to the hook, nonplused.

This is the kind of fishing a lot of people grow up with. When it comes to casting your rod, the weight and bait carry the line out into the water. You pull your arm back, rod over your shoulder, and then snap your wrist at the release, letting the reel send the line rocketing. It whizzes through the air, plops in the water. And you wait. 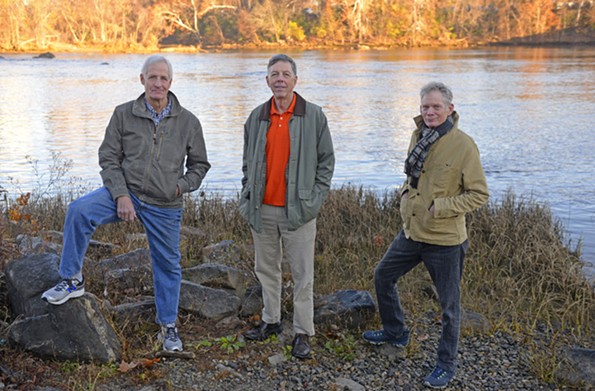 There's no whizzing line, no plop. There's a whisper and the lightest of touches on the water's surface. There's no weight to rely on, because the end of the line might hold a lure as light as a mosquito.
"It's the weight of the line itself that propels this tiny little fly," Bryan says, describing it as an extremely thin, miniature garden hose.

Inside the mammoth Bass Pro Shops complex that looms over Interstate 95 in Ashland, kids and parents are lining up to see Santa. Beyond the holiday decorations, boats, outdoor wear and sporting gear, fishing rods are lined up like water soldiers.

Fly fishing gets a dedicated room called the White River Fly Shop, an area with an array of choices that takes you from the simple to the complex, starting with a $69 outfit on up to a graphite rod, reel sold separately, that goes for $425.

At least four staffers on duty this day are avid fly fishers. Out in an empty aisle, sales associates Michael Simon and Chuck Coulter, who have fly fished for decades, demonstrate the beauty of casting a line.

Simon pulls the rod back and forward, the line unfolding in a graceful wave. He moves lightly with a practiced touch, efficient movements producing precise control. It's mesmerizing, and appears deceptively easy.

He's been doing this for a while.

Now 70, he started fishing as a young boy in New Jersey, breaking his bait-casting rod before he ever caught a fish. So he simply used the rod and a line.

When he saw a fly fisherman on Diamond Mill Pond in Morris County catch a fish every fifth or sixth throw, he became fascinated. He's also enthralled by the sport's history, he says, a tradition that goes back to Macedonian days.

Coulter has me stand with my right foot forward, a teaching technique, so that when I pull my arm back it can reach only so far before feeling uncomfortable. The idea is to keep the back-and-forth movement of your arm to about 30 degrees. He holds my forearm steady. Let the rod do the work, he says. You pull slowly back, throw smoothly forward. You don't want the line to snap. The effort to control the line, watching it unfurl and fly forward, is frustrating but entrancing. It's easy to see the allure.

But the technique alone, and the thrill of mastery and constant refinement, isn't the only thing that attracts people to fly fishing. 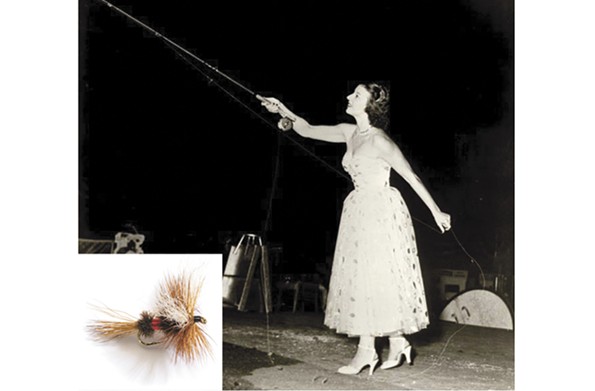 "It consumes you," Coulter says. "It's peaceful."

Born in Illinois, he moved to Yorktown as a Marine in mid-'70s. He recalls trying fly fishing during a trip to the Jackson River in Bath County around 1980. He dropped a fly near a 5- or 6-inch-long rainbow trout swimming under a hemlock bush, he says, "and it had mercy on me, and it ate it."

It became a decades-long passion, he says. When he escapes to the water and finds a spot, he says, "I'm in a space and time that nobody else owns."

Virginia is a fly fisherman's paradise, says Beau Beasley, of Warrenton, who runs the Virginia Fly Fishing & Wine Festival scheduled for Jan. 13-14 at the Meadow Event Park in Doswell.

You can fish 12 months out of the year for just about anything, he says — speckled trout in the Chesapeake Bay, the great small-mouth bass in the Shenandoah River, or shad in the James.

At its core, he says, this sport is about the river, the fish and conservation.

That's one reason Bryan and Carter have worked on this project as volunteers. All proceeds from the $145 book will benefit the Native Fish Society in Oregon and the James River Association in Richmond.

That's how Beasley ended up in the sport — to deal with stress, says the retired captain with the Fairfax County Fire and Rescue Department: "Fly fishing for me was like therapy."

Thurston Moore, chairman emeritus of Hunton & Williams, says he's come to appreciate the technicality, the art, the sensuality and science of fly fishing — "all combined into one outdoor pursuit."

But he finds himself reflecting on the mindfulness of it, he says — more so than his days as a boy growing up in Memphis, fishing in Pickwick Lake. Now 70, he likes to say that "most of my fishing is in my mind."

You can take yourself there as a calming exercise, he says, whether it's in the foothills of the Andes or an island in the Bahamas.

"I think a lot of it's about dreaming," Moore says. "To borrow an analogy," he says, quoting Picasso, "The purpose of art is to wash the dust of daily life from our souls." Fly fishing is like that, too, he says, contemplated and focused.

"And there's nothing more exciting than feeling that tug of life on the other end of the line," Moore says.

He'll be vacationing during Christmas week with around 30 extended family members. Fishing will be a key part of the trip.

Generations of family members are fishing together. And for older anglers, there's been hope in seeing the sport continue among youth. Coulter and Simon at Bass Pro Shops say that's the biggest trend they're seeing — young people drawn to fly fishing.

"I'm excited," Coulter says. "The future of this sport is in kids."

And it can be a lifelong pursuit that's bottomless, says Mark Sherwood, chief executive of the Native Fish Society in Oregon.

Growing up in Colorado, Sherwood says, he and his father were brought together while learning to fly fish alongside each other. And he's still learning.

"For people who are naturally inquisitive, it's addictive," he says. "From your first day to your last day of fly fishing in your life, you'll still be learning something."

There's something about being 60 and still working to perfect a sport, says Pam Royall, former chairwoman of the marketing department at VCU and head of research at Royall & Co.

She and her husband, Bill, who founded the company, met 20 years ago. He got her into the sport, in part, by having fly fishing instructors come to the company's offices to offer lessons to employees. They'd stand in the parking lot off Parham Road and practice.

"It was one of those things that he was excited about," she says, "and vicariously many other people at our company got excited about."

She chose the Bonefish Clouser as her favorite fly, a nod to its role in her first fishing triumph, catching 50 bonefish from the Indian Ocean off Seychelles Island. "There's nothing like success to create a situation where you enjoy something," she says.

For those who want to get started, Royall advises, "No. 1: Be patient with yourself. And No. 2: Do it with somebody." 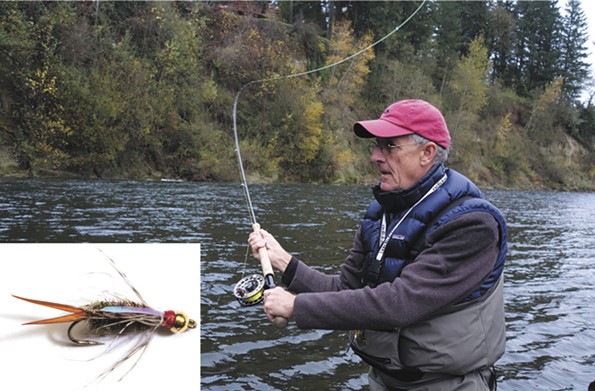 For Bryan and Carter, the fulfilling part of "America's Favorite Flies" has been the power of collaboration in an individual sport. About celebrating fly fishing in all its forms, and for the variety of reasons people are drawn to it — the journey, the immersion, the challenge and the love for the environment.

"It's a fascinating game to me," Bryan says. "And there's hope in every cast." S