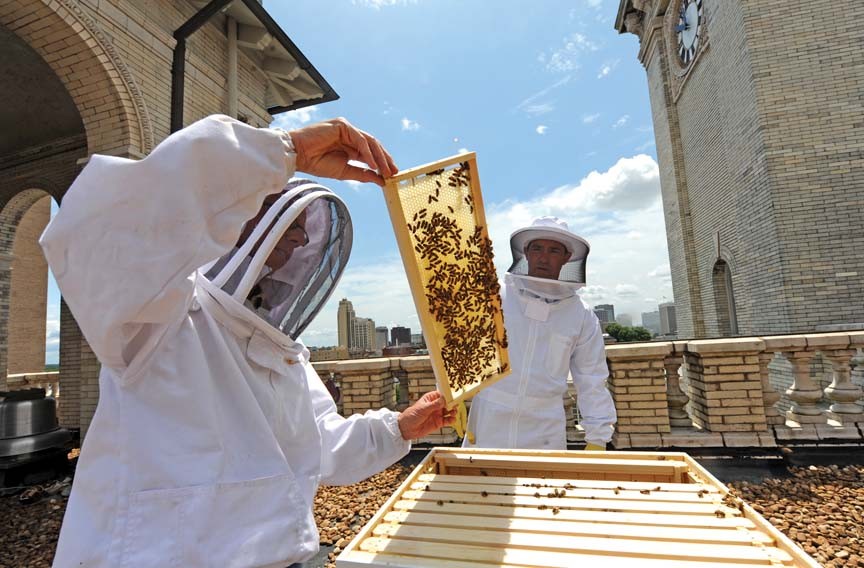 The swankiest suite at the Jefferson Hotel isn't available to commoners. It's already occupied by a queen and her retinue — some 50,000 strong.

A hive of honeybees has taken up residence on the roof of Richmond's storied hotel at the behest of Lemaire chef Walter Bundy. The hotel is the first local business to have a hive installed by beekeeper David Stover and garden consultant Nina Zinn, owner of Urban Backyard Edibles. They teamed earlier this year to offer hive installation and maintenance packages to restaurants.

Stover and Zinn placed the three-story hive on the Jefferson's roof, just under the iconic clock tower, in early May. The colony seems to be thriving, as bees zip off the roof in all directions in search of nectar. "They go everywhere," Bundy says. "It's the craziest thing."

To give the bees a chance to stock their larder for the winter, chef Bundy won't harvest any honey this year. Next spring he hopes to have plenty to share with Lemaire guests. "We want to use it in the restaurant and showcase it," he says. "And really be as local as possible."

Bundy's reluctant to reveal all of his plans, but he has a few definites in mind: Rooftop honey butter served with bread. Cocktails such as the bee's knees, with lemon juice, honey and gin. And perhaps a specialty honey-wheat beer, made in partnership with a brewery such as Hardywood Park.

Armed with a smoker, his white beekeeper's suit and a copy of "Beekeeping for Dummies," Bundy says he's enjoying learning about bees: "The women run the world. … It's pretty cool." And he's escaped getting stung — so far: "It's all right. I'm sure I will."