No one can serve two masters. By his living arrangement of the last four years, City Councilman Doug Conner has made it clear which one he serves.

by Terone B. Green 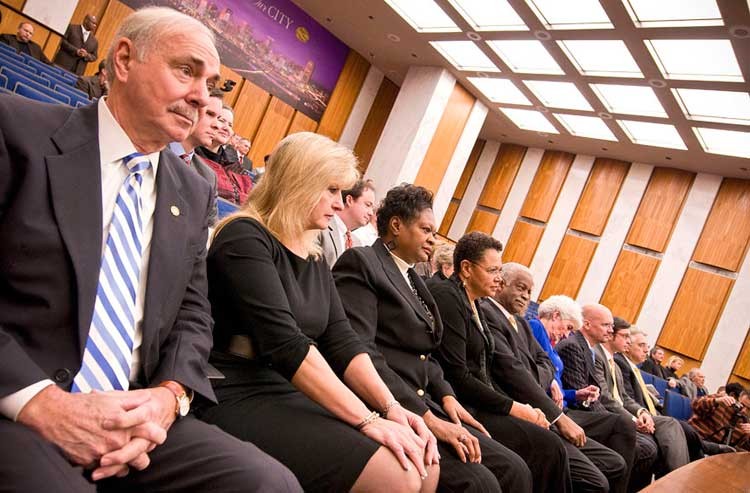 An egregious violation of public trust appears to have occurred in Richmond. City Councilman Doug Conner, elected in 2007, has admitted to living outside the city limits, a potential violation of state law, despite the faith placed in him by the voters of the 9th District to responsibly and legally represent their interests.

This revelation, reported by local news media, is atrocious for at least three reasons:

First, state law provides that elected officers in any Virginia jurisdiction must reside in the jurisdiction that they represent. The spirit of this law is as moral as it is legal. The essence of elected representation in America is that you must live among the people you represent in order to convey and attest to their wishes, lifestyles, needs, pains and successes. For Conner to have lived in Chesterfield County, a jurisdiction that competes with the city — in education, lifestyle, even tax rates — while pretending to represent Richmond's 9th District may or may not be illegal, but it certainly qualifies as betrayal.

Secondly, Conner's highly questionable conduct has not only set a bad example for other elected officials who wish to snub state law until they get caught, but also effectively hindered and undermined Richmond's quest to become a tier-one city. In his State of the City address, Mayor Dwight C. Jones described a tier-one city as one that "offers a safe, supportive and culturally diverse environment — with world-class education, a well-trained work force, multi-modal transportation, high-performance government, equitable access to health care, thriving economic development, and inclusive, healthy and unique neighborhoods."

How is it possible that a representative of one of the city's most impoverished and crime-ridden districts could support any aspect of this vision when he's admittedly been residing 30 minutes outside the city? Even the Bible says: "No one can serve two masters. Either he will hate the one and love the other, or he will be devoted to the one and despise the other."

Thirdly, City Council has shirked its responsibility to deal with this crucial matter. What did members of City Council know about Conner's living arrangement? And when did they know it?

This question is crucial because the responsibility to deal with the matter of Conner's residency is not only in the hands of those who elected him, but also within the legal purview of his colleagues on City Council. According to the city charter, "Any member of the Council may be removed by the Council, but only for malfeasance in office or neglect of duty." Such an action could legally take place following a public hearing and presentation of witnesses and overturned only by the Richmond Circuit Court.

Conner's admission that he's spent little time living at the residence that he claimed as his abode in order to get elected constitutes malfeasance and neglect. Therefore, City Council's obvious slothfulness in moving on this issue appears to constitute its willingness to participate in this ongoing conspiracy, making a mockery of the entire city government and its principles.

But where City Council is concerned, this situation may be far more sinister. In 2004 Conner purchased a house on Grand Brook Circle in South Richmond to run for the seat, only to discover that the house wasn't in the 9th District. He later bought a rancher on Germain Road, which is in the 9th District, where residents say he's rarely been seen while he acknowledges living in yet a third home, off Beach Road west of Pocahontas State Park. When City Council drew its redistricting lines last year, the Grand Brook Circle home suddenly turned up in the 9th District, assuming the plan is approved by the U.S. Department of Justice.

Was City Council aware that Conner needed this redistricting arrangement to fix his questionable residency situation? Did he disclose his apparent conflict before voting on this plan? What other conflicting votes might there have been? Again, what did City Council members know, and when did they know it?

Richmond Registrar J. Kirk Showalter says three qualified city voters must submit written complaints that Conner doesn't live at the Germain Road home before her office can investigate the matter. As of late last week, no complaints had been filed. But I believe there is now enough evidence, including Conner's own admission, for members of City Council to take action.

Any semblance of integrity would have moved Conner to step down by now, especially since CBS-6 News broke this story. But if he chooses not to take the high road by resigning, his colleagues should immediately remove him.

While thousands of constituents of the 9th District live amid poverty, unemployment, poor education and the fear of crime, Conner, for the past four years, has been nestled away in the comfort of his posh Chesterfield County abode. The city, with its deeply serious issues and great hopes of becoming a tier-one municipality, can ill afford the kind of antics that Conner has tried to pull. No one can serve two masters. By his living arrangement of the last four years, Conner has made it clear which one he serves. S