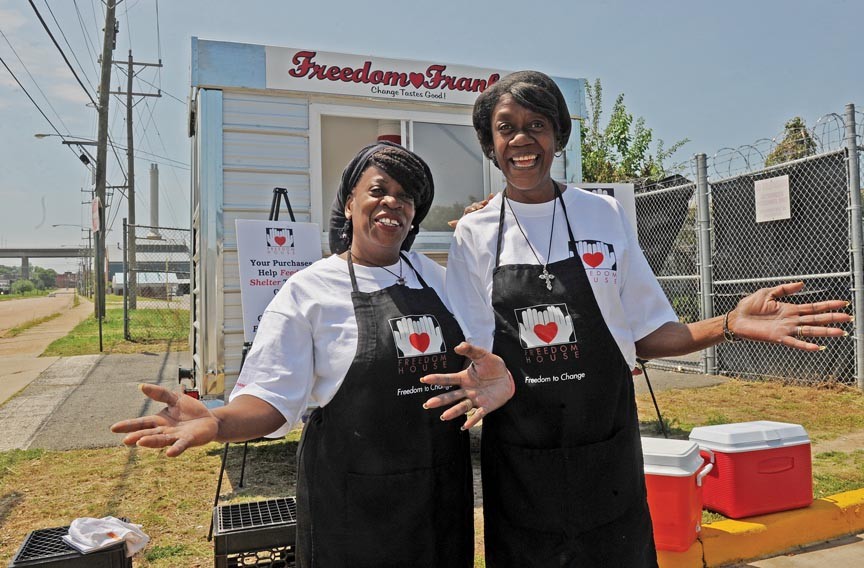 Sometimes you don't need an ambitious program to employ people who are homeless. You just need $5,000 and a bunch of hot dogs.

Freedom House, one of Richmond's main providers of services to the homeless, has opened a hot dog stand to feed construction crews building the new city jail.

"It was this crazy idea I had," says Cindy Barton, director of grants administration for Freedom House. She first thought about it a few years back, when a swarm of hungry construction workers surrounded the Manchester Courthouse. But Freedom House needed money to make it happen, so it shelved the idea.

Then a few weeks ago, Meadwestvaco gave $5,000 to the nonprofit. Freedom Franks was born.

Staffers realized they didn't know the first thing about running a hot dog business, so they consulted a few experts: Tom Winfree of Tom's Meats & Produce, Ed Edge, owner of the RVA Vegan food truck, and a hot-dog cart veteran.

The cart opened Monday, outside the Conrad Center Soup Kitchen at 1400 Oliver Hill Way. It's staffed by two women who are living at Freedom House's shelter. Both have food service experience — they hold part-time jobs for a caterer and a restaurant — and great customer service skills, says Jay Patrick, director of programs for Freedom House. "They just were the perfect fit."

The women, who earn $8.50 an hour to start, use the commercial kitchen in the Conrad Center to make prepared food: chicken and beef barbecue, as well as chicken salad and tuna salad sandwiches. A Berks hot dog with a bag of chips, a drink and a piece of fruit — a hearty lunch for famished construction workers — sells for less than $5, Patrick says. The cart may add breakfast as well.

Freedom House believes in hiring its clients. Already, 90 percent of the staff members at the Conrad Center once were homeless. "In my big dream world, we've got more carts and ways to do job training for folks," Barton says. If the single cart does well, then you might start seeing a whole fleet of Freedom Franks.