Jo and Rob Pendergraph of Manakintowne Specialty Growers have been supplying restaurants with local products since 1985. 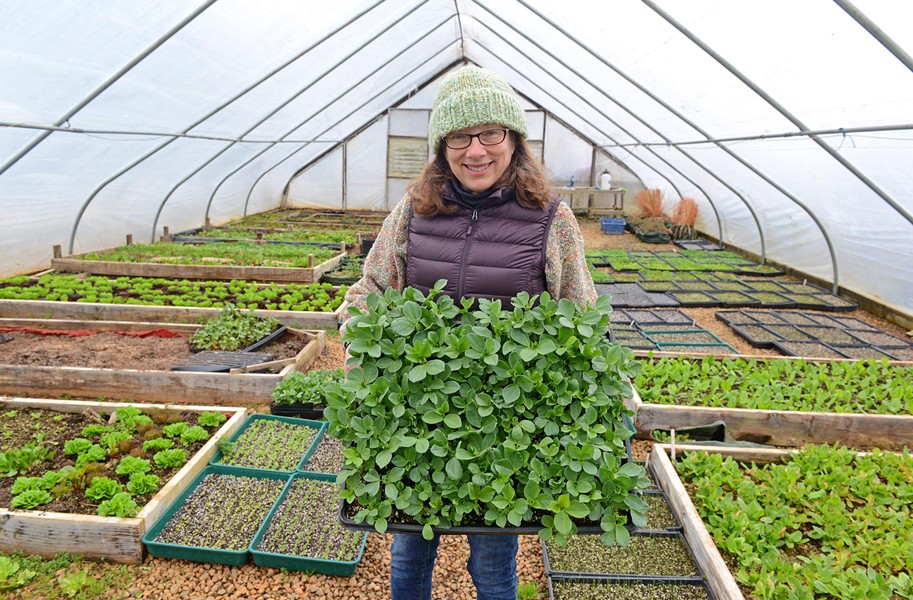 Scott Elmquist It’s been a tough winter: But Manakintowne Specialty Growers — started by Jo Pendergraph with her husband, Rob — continues to supply chefs across town with greens throughout the year.

This generation of food writers, chefs and restaurateurs makes it sound as if they invented farm-to-table dining. But the concept is far from trendy.

“There’s always been chefs out there looking for the really good stuff,” says Jo Pendergraph, who started Manakintowne Specialty Growers 30 years ago with her husband, Rob, in Powhatan County.

You’ve seen the Manakintowne name on menus across town, in such places as the Roosevelt, Heritage and Rappahannock. And their products, unnamed, dot the menus of Mamma ’Zu and Stella’s, among many others. You’ll also find Manakintowne greens for sale at Ellwood Thompson Local Market, as well as Little House Green Grocery, Harvest Grocery & Supply and other small, specialty grocery stores.

Early customers were mostly European chefs. “That’s just what they were used to in Europe,” Jo Pendergraph says, “having access to local products. If we had tarragon, they flipped out.”

Since its inception, Manakintowne has offered four products that form the foundation of what it grows: salad greens, herbs, edible flowers and micro greens. The flowers aren’t ready right now, but the other three staples are available year-round.

At the same time, taking their cue from the chefs to whom they sell, the Pendergraphs experiment with new varieties every year. Some find a permanent place in the standard selection while others disappear after the first round.

When they began, Jo Pendergraph was at home raising the couple’s two children and her husband worked for UPS. They enjoyed growing things, and the farm, as it evolved, wasn’t something that they envisioned as their primary occupation or a way to support their family.

“We wouldn’t have been able to do it if it weren’t for working off of the farm,” Pendergraph says. Rob’s job made Manakintowne possible, and only in the last 15 years has farming become their full-time profession. “It’s seasonal and it’s hard,” she says.

It’s a difficult feat and speaks to the success of what they do.

This winter in particular has been difficult. Normally, plants started in the big, hooped greenhouse would be ready to go into the ground outside by mid-February. For now, the Pendergraphs are trying not to look at the calendar.

In addition to Manakintowne, they’ve also assumed management of Huguenot Springs Farm, a historically significant property also in Powhatan County that was granted as a refuge for French Huguenots by William Byrd in 1701.

And last year, the Pendergraphs created Virginia Growers Specialty Produce, an organization that helps to mentor other farmers and link newer farmers with both restaurants and each other. It’s an important way to help them find a market for what they grow while learning from each other.

Trailblazers, educators and growers — the Pendergraphs are intent on moving the industry forward.