Riding a three-year high and playing in a new campus stadium, University of Richmond football aims for something bigger.

Two thousand, six hundred and twenty miles, 39 hours and 11 minutes by bus, separate Robins Stadium, where the University of Richmond Spiders play, and Los Angeles Memorial Coliseum, home of the powerhouse Trojans of the University of Southern California.

On a breezy, sun-kissed afternoon last week the tall, lanky No. 7 zips the football around the field like a thoroughbred Trojan. Except Aaron Corp, last seen in maroon and gold completing 13 of 22 passes against the University of Washington in September, is in Richmond, inexplicably christening the new stadium in Richmond during spring practice. He launches an arching bomb down the right sideline, hitting his receiver in stride, for the afternoon's first touchdown during white-on-blue drills.

Corp could be at any number of high-profile, Division I college football programs, but he's in Richmond, locked in a battle with sophomore John Laub to become the Spiders' starting quarterback for the inaugural season in the spanking new Robins Stadium, the $25 million, 8,700-seat campus arena next to the Robins Center, where the men's basketball team just finished the season ranked No. 24 in the country.

In a mediocre sports town where college hoops reign supreme, the football Spiders are trying to break a long-held tradition of irrelevancy to the masses. They are Richmond's team, resigned to a fan base of students and alumni, but they've never really been Richmond's team, where allegiances are divvied up between 'Hoos and Hokies.

On a warm March afternoon on campus, where the new grass comes in and the dogwoods bloom, there's a whiff of change in the air. 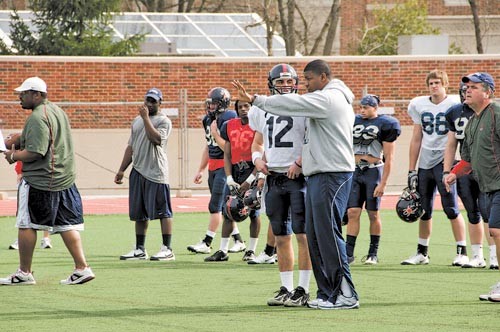 In addition to Corp, the Spiders have a new head coach — Latrell Scott, a 34-year-old Lee-Davis graduate known for his recruiting skills — and the program is riding a three-year trajectory that led to a national championship in 2008 and No. 1 ranking for most of 2009 in the Division I Football Championship Subdivision, formerly known as Division I-AA (the team finished 11-2, losing to Appalachian State in the playoffs in December). If further validation was needed, last year's head coach, Mike London, is now the head coach at the University of Virginia.

“I think this stadium we're building is an invitation to Richmond to come to our campus,” says Scott, a former tight end who worked for three years under London's predecessor, Dave Clawson, and helped recruit many of the seniors on the current team. “If you're a football fan, there's no reason for us not to be Richmond's football team.”

While the team's recent success couldn't have come at a better time — coinciding with the opening of the new stadium — maintaining success traditionally has been elusive for UR. The wins historically come in spurts. “Our history of football is really kind of up and down — we'll have a good year, then a down year,” says Jim Miller, director of athletics. Selling season tickets for the new stadium has never been easier. Miller expects to sell all of the designated 4,200 season tickets by early August; in years past UR would be lucky to sell half that. When talk of the upcoming season comes up — what if the team has a bad year? — Miller tempers his enthusiasm. The new coach is inexperienced. Scott has never been a head coach or even an offensive or defensive coordinator, and the team has considerable inexperience in some key areas, such as the offensive line.

The Spiders also play in the Colonial Athletic Association, widely considered the toughest conference in the lesser known NCAA Division 1, Football Championship Subdivision (FCS): “It's such a fine line between winning and losing games,” Miller warns. “Winning brings about a lot of scrutiny.”

Winning also brings success, and good athletic directors know the importance of riding out a good thing. The men's basketball team was luring 8,000 fans to the Robins Center for its last few home games, fueling merchandise sales and bringing national exposure. The team was featured in Sports Illustrated a few weeks before the NCAA tournament, pegged as a potential giant killer, but wound up losing in the first round to St. Mary's College of California.

When the football team won the FCS championship in December 2008, hits to the Web site for that month nearly doubled, to 600,000, compared with 330,000 in 2007. Spiders' merchandise, T-shirts and other novelties started selling, too. In a two-month span, from December 2008 to January 2009, the university sold more than $100,000 worth of UR-branded merchandise from its online store, more than the previous five years combined, says Bob Black, assistant athletic director for communications at the university. Combined with the recent NCAA basketball appearance, demand for Spider gear is as strong as it's ever been. A couple of weeks ago, Black says, they even started selling shirts and hats at Dick's Sporting Goods.

Success in collegiate sports has long been used as a marketing tool, and it's effective, says Paul Jensen, associate professor of economics at Drexel University. “Experiences at Division I schools, where there's been success in athletics — [it] has had a tremendous impact on numbers of applications” the following year, says Jensen, who co-authored a paper for the Journal of Sport Management in 2003, “Determinants of Spectator Attendance at NCAA Division II Football Contests.”

The value of the exposure, however, is questionable. Tim DeSchriver, an associate professor of sports management at University of Delaware and Jensen's co-author for the 2003 report, says a school's success in sports may increase applications, but studies show the quality of new applicants is typically lower than average.

The measurable impact comes mostly from national exposure, but it's difficult to quantify the impact of, say, the Spiders championship run two years ago. In other words, if it's not a bowl game or the NCAA tournament, your school doesn't make ESPN's highlight reel.

Norwood Teague, director of athletics at Virginia Commonwealth University, knows this all too well. This year's men's basketball team didn't make the NCAA or the National Invitational Tournament, both nationally televised basketball post-season contests, and the team was forced to settle for the much more obscure College Basketball Invitational. The team began play in the championship title series Monday — best two out of three — against St. Louis University, but almost no one outside the Siegel Center has a clue VCU's still playing.

That wasn't the case three years ago, when Eric Mayor nailed a 17-foot jumper with 1.8 seconds left to beat Duke University in the first round of the NCAA tournament, the granddaddy of collegiate sporting events. The shot became an iconic symbol of VCU basketball.

“When we beat Duke, we tried to calculate what kind of marketing that did for the school. It went on and on and on,” he says. “We were on national TV for 11 minutes. Every CBS [station] in the country was on us for 11 minutes. The spikes on our university Web sites were off the charts.”

The success of the basketball team has helped renew rumblings about VCU football, something of an urban legend (see sidebar), but football represents an entirely different kind of marketing, Teague says. “It's hard to beat what we did with men's basketball,” he says. “The thing that [football] would do is it would provide a real rallying point for alums and fans.”

It also showcases the university in ways that basketball can't, says Miller, Richmond's athletic director. “Most of the [basketball] games are at night. Football on a Saturday afternoon is just a different experience,” he says. There's the pre-game tailgating, early Saturday afternoon kickoff and an overall campus experience.

For alumni, the new stadium already is becoming a source of pride well before the first home game there Sept. 18 against Elon University. Charlie Crowder, who graduated in 1976 and has attended Spiders' games at the old stadium ever since, shows up for spring practice to get an early peek at the team. He says he'll miss the old city stadium, but beams like a proud father standing along the track inside the nearly finished Robins Stadium. The new quarterback from USC looks good, but Crowder, vice president of a local employee benefits company, says he's not sure that sophomore Laub isn't the better choice. He worries more about the offensive line. “We seem to be getting the rush in there,” he says while watching practice. “Good for the defense, bad for the offense.”

While Laub appears to be the more mobile of the two quarterbacks — an advantage with a porous offensive line — the kid from USC is statuesque by comparison, rifling passes down the field with precision. His afternoon impresses coach Scott, who refuses to tip his hand about who'll start. He also confides a perhaps more astonishing tidbit: He didn't really recruit Corp, who first called the university after sitting out most of last year with USC. “He's one of the quarterbacks at the University of Richmond,” Scott says, nonchalantly. “He's in a dead heat right now with [Laub].”

On the field, he tempers the excitement as well, declining to make Corp available for an interview. Big arms, like big expectations, can often become a burden. After Corp connects for the arching touchdown down the sideline, he runs down the field to congratulate his receiver. On the next play, he tosses an interception.