Home Is a Battlefield

The Valentine's new exhibit takes a sobering look at Richmond in wartime. 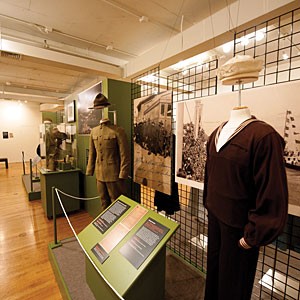 A New York Times editor recently declared on National Public Radio that America's involvement in Afghanistan didn't constitute a real war because there's no draft. I flashed back to a sobering photo published in his newspaper the previous week. It showed military brass and families standing in the cold darkness of an airfield in Maryland awaiting remains of six servicemen killed in Afghanistan.

Tell those wives, parents and friends we aren't in a real war.

World War I and World War II, two American engagements that were inarguably real wars, but also defined our nation — and our national character — in the 20th century, are subjects of a compelling and poignant new exhibition, “I Am Well and War is Hell: Richmond During the World Wars,” at the Valentine Richmond History Center. Pulling from its deep well of documents, posters, artworks and costumes (and collections of other area institutions and individuals), the exhibit is a snapshot of Richmonders serving on the front lines and how their hometown rallied during the war years.

Focusing on these seminal events and crafting a narrative for a comprehensive exhibition would be daunting enough, but tackling both world wars and scripting a modest exhibition would seem impossible. Intelligently and elegantly, however, the history center's staff and designers offer a presentation that's sweeping enough to capture the wars' broad themes, yet as achingly personal as a letter written by a Richmond woman, Mary Dinsmore, to her husband, Hoke, who was in Europe for basic training. It is sealed with a bright pink, full-lipped kiss. Equally touching is a stylish, exquisitely tailored wedding gown from 1946, fashioned of parachute silk, trimmed in lace and rayon. It proves that fashion takes no holidays even during wartime shortages, rationing and grievous losses.

While the exhibition's overall tone is somber, it stresses a community's capacity to rally. And Richmonders, like most Americans, united and prevailed despite deep ethnic, economic, class, racial and sexual barriers that seemingly were unbridgable at the time. America came out of both wars with dramatic advances in women's and civil rights and technological discovery.

The exhibition travels a high-wire by refraining from following a sequential timeline but interweaving the two wars, as if the overriding themes were similar. The first of the exhibit's four sections, “Why We Went to War,” reminds us of America's rationale for going into battle. “The world must be made safe for democracy,” President Woodrow Wilson declared on the occasion of the earlier conflict. Two million American troops would serve overseas.

While World War II escalated on multiple fronts, President Franklin D. Roosevelt proclaimed his mantra — the four freedoms: of speech, of religion, from want and from fear. Sixteen million would serve overseas while tens of millions offered civilian support back home. In the “War and Memory” section the exhibition stresses, “We are always fighting the last war,” as one panel posits. “It is the evolution of technology, strategy and tactics over the course of a war that makes the experience new.” This section includes an illustration of the World War I memorial in Byrd Park, the Carillon. It was built to recall Armistice Day in 1918: “The chant of bells ringing from every church in France,” offered a glimmer of joy after great suffering. Nearby is a photograph of the World War II Memorial on Belvidere Street with its caption explaining how this pavilion was expanded, even before completion, to include memorials for the Korean War dead — and how planning is under way to honor some 100 Virginians who have died in Iraq.

“The Richmond Homefront During the War,” emphasizes the establishment of Camp Lee in Petersburg, where 134,000 soldiers were trained during World War I. This chapter is picked up later when the base is reopened to accommodate quartermaster activity. Through photos and letters, the exhibit tells the little-told story of Base Hospital No. 45, which was organized by Dr. Stuart McGuire from Medical College of Virginia and operated from August 1918 to February 1919 in Toul, France. Within earshot of the battle lines, he and 26 fellow doctors and 100 nurses from Richmond attended to some 22,000 sick and wounded. During the Second World War, a medical contingent from MCV served in North Africa on a smaller scale.

In “Richmonders Fighting Overseas,” it's clear that during both wars black Americans served with distinction, despite segregation. There is an insightful, videotaped interview with Vice Admiral Samuel Gravely Jr., the Richmonder who was the first black to command a U.S. Navy ship.

Among the photos, illustrations and letters displayed, few are more intriguingly immediate than the 20 quick sketches — often violent bombing scenes — by Neil November, who served on the USS Lauderdale, a rescue ship in the South Pacific. And there is a lengthy, impeccably typed letter from James M. Klaus, a Richmond resident who led an all-black troop in quartermaster activities, that handled resupply operations. “No description can do honor to actually being in an assault,” he wrote home. “I am well and war is hell.” Sadly, Klaus never made it home alive.

Despite the sacrifices, the men and women of these world wars knew what they were fighting for.

“I Am Well and War is Hell: Richmond During the World Wars” continues through September. Valentine Richmond History Center, 1015 E. Clay St., 649-0711.