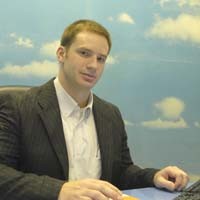 David Bradshaw's seductive pink lips make him a smooth talker, and his attentive emerald green eyes show he's a good listener, too. At least that's what his cartoon stand-in on his company Web site, www.shopacontractor.com, would suggest.

The talking animation whose eyeballs track your mouse movements is helping Bradshaw spice up an otherwise unsexy topic: home improvement.

The site officially launched in June and so far has mostly posted listings to help readers find contractors. This month, Bradshaw will be adding more information and advice columns about building and finance.

There'll be real estate advice and information about home mortgages, and eventually how-tos for simpler projects people can knock out themselves.

Bradshaw says he often notices that people know they need a contractor, but aren't really prepared to hire one.

"Have you gone to the city and found out where your property line is?" he asks. "Have you called Miss Utility to mark where your underground pipes are so you don't dig a foundation into a gas line?"

Bradshaw would like his site to be more of a resource for information. "If you don't have that, you have a phone book," he says. HS