Out-of-towners keep getting the city’s love and money (see Redskins), while the Flying Squirrels languish in a broken-down stadium. 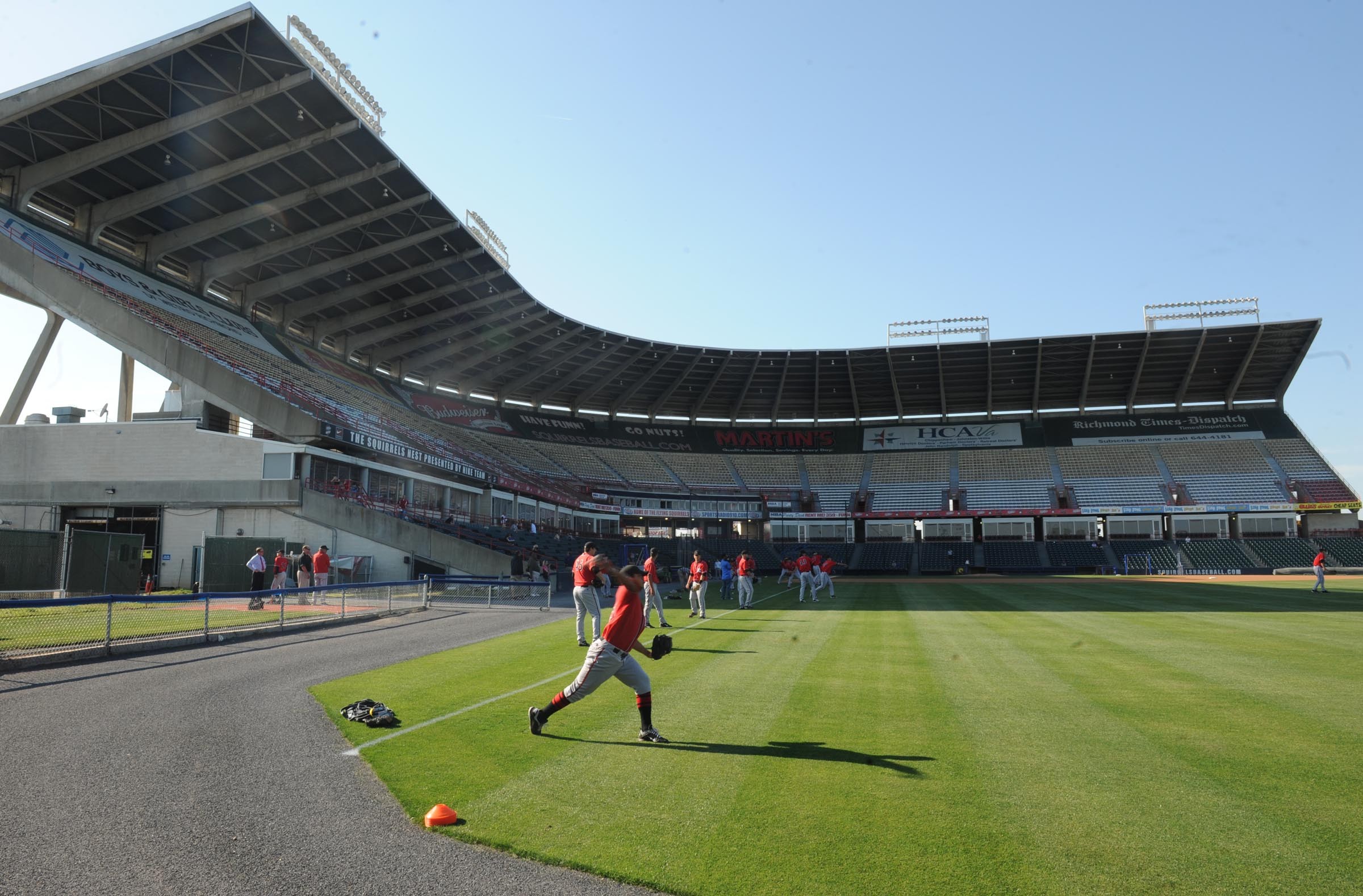 A day after parading through the streets of San Francisco with thousands of adoring fans, Nutzy is back in cold, dank Richmond.

Squirreloween generates a modest turnout. Coming a day after Halloween and two days after Frankenstorm, the event draws 600 people, compared with 4,000 a year ago. But the commitment, and the stockpile of SweeTarts, is unwavering.

"We figured out how to get him on the East Coast and the West Coast," Todd "Parney" Parnell, vice president and chief operating officer for the Squirrels, says of the well-traveled mascot. Parnell also spent a few days in San Francisco after the Squirrels' big-league parent, the Giants, won the World Series.

Nutzy made 600 appearances throughout the Richmond region in 2011, Parnell says. This year he's on pace to make 750 public cameos. Nutzy's hectic schedule — some Saturdays, he makes as many 12 stops — no doubt is one of the key reasons why the team is one of the most beloved in all of minor league baseball.

"We try to say yes to all occasions," Parnell says of the overworked mascot. There are now three Nutzys to keep pace with demand. "I think it will only get better when we get a [new] facility to facilitate all that love!"

But increasingly that seems like wishful thinking. Lost in all the commotion about the Washington Redskins' new summer training camp here, the Flying Squirrels are sitting idly by, waiting for some indication that the city will return their affections.

After three years of broken promises to build a baseball stadium for a team that led minor league baseball's Eastern League in attendance this year — 438,002 fans — the Squirrels' future remains hazy.

"I've been concerned with the lack of progress that has taken place from the second we moved to Richmond," says Lou DiBella, managing owner of the team. "I understand a bad economy. I understand political pressures. Things keep going wrong with the ballpark and we keep putting lipstick on a pig."

The contrast between the city's approach to the Squirrels and the Redskins couldn't be more striking. While Mayor Dwight Jones moves at lightning speed to shift millions of dollars from existing capital budgets to fund the $9 million training camp behind the Science Museum of Virginia, the Squirrels can't even get a few lights installed.

Earlier this month, the Richmond Metropolitan Authority, which owns and operates The Diamond, announced a new lease extension with the Squirrels and an additional $300,000 in funding for the lighting upgrades from the city and Chesterfield and Henrico counties. It was quickly retracted when county officials complained that they hadn't been briefed on the deal.

"Right now that project is on hold," says Linda McElroy, a spokeswoman for the authority. While the lights may or may not be improved in time for the 2013 baseball season, some minor field repair — including filling a sinkhole just beyond second base — continues, at a cost of $110,000. The bill for those improvements is being split by the authority, the Squirrels and Virginia Commonwealth University.

The Redskins — one of the richest sports franchises in the world — are putting up no money to get their training facilities built here. But the Squirrels have put in more than $2.5 million to upgrade The Diamond. And the team's agreed to foot a quarter of the costs to build a $50 million stadium — $12.5 million — no matter where it's built. It's enough to drive Nutzy, well, nuts.

Making matters worse, as talks progressed earlier this year about where to build the ballpark, there's been little effort to include the Squirrels. Civic boosters such as Venture Richmond and the Greater Richmond Chamber are pushing City Hall to build the stadium in Shockoe Bottom.

"All we know is that there isn't the level of communication that we would hope for," says Brian Callaghan, a minority owner of the team (and the Squirrels' only Richmond-based owner). "Venture Richmond and the chamber helping to shape the discussion in some way — nobody objects to that," he says. "It's the part where we feel that we are not as involved as other parties are, and it has us confused as to why that would be."

For now, the Squirrels are willing to take a back seat. But it's anybody's guess as to how much longer.

Just don't ask him if he's happy with the prospect of another lease extension in an aging stadium: "What's there to be happy with?" S