A new tome uncovers the art of the comic book. 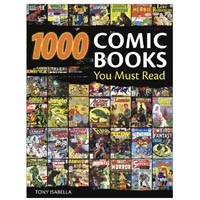 Tony Isabella has spent his life reading, writing and amassing comic books. How many does he estimate he currently owns? “It's possible that I have a hundred thousand comics between my house and my storage area,” he says.

It's no surprise that he was approved to write the new, and quite formidable “1000 Comic Books You Must Read” anthology (Krause Publications). In 272 pages, the Ohio-based Isabella profiles books from across the sprawling canon of the funny papers. His roster includes titles that you may be familiar with — 1963's “Fantastic Four Annual #1,” his most beloved comic — and others you assuredly aren't, such as 1942's “Bill Barnes, America's Air Ace Comics #7,” in which the titular character supervises the dropping of a uranium-powered bomb on Japan, predating the end of World War II by more than three years.

Some of Isabella's own published comics are referenced within the book. As a prolific writer who has worked for both Marvel and DC, he has penned such popular titles as “Ghost Rider,” “Hawkman” and “Captain America.” His proudest contribution remains the creation of Black Lightning, an African-American superhero that debuted for DC in 1977 and has achieved enduring success. On the analytical side, he's responsible for thousands of pieces for the industry magazine, Comic Buyer's Guide, and regularly maintains a Web column called Tony's Online Tips.

With the catalogue of “1000 Comic Books” spanning from the 1930s until present day, Isabella, 57, took suggestions from fans, friends and fellow industry workers on what to keep. He played a major role in the production of the project by compiling and sorting lists, retrieving proper cover scans, researching copyrights and, of course, writing the book. “On a good day, I could write 20 or 30 entries,” he says. “All told, we're talking eight to nine months.”

The writer purposely included names from as many genres as he could: “The Sandman” is noted here but so is the underappreciated “Archie.” “Superheroes are what I grew up with, but they've never been the only kind of comics I read,” Isabella says. “There are wonderful works in every genre imaginable and I wanted to reflect that. I didn't do the 1,000 best or the 1,000 most important. I set out to bring readers a thousand or more comic books showing the diversity of the field.” That diversity means the addition of an educational comic that details the ills of colitis and Crohn's disease.

Having his work finished and printed, Isabella maintains a few gripes with it — for instance, he overlooked the late '50's series Cosmo the Merry Martian — but is otherwise content with his choices. “People are loving this book the way it is. I would hate to go in there and alter it, other than correcting a misspelling or a thing like that.” Remarkably, the completion of “1000 Comic Books” means that Isabella has already begun plotting future efforts. “My hope is that it sells so well, there's not one sequel but a series of sequels,” he says. “I could see myself doing one of these books every couple of years.” S

“1000 Comic Books You Must Read” is available from Krause Publications, $29.99 in hardcover. Read the author's online tips  at worldfamouscomics.com/tony/.