George Floyd's brother, Rodney Floyd, stands in front of the Jefferson Davis monument during a preview Monday night for the hologram of his sibling.

A holographic representation of George Floyd appeared on the grounds at Marcus-David Peters circle on Tuesday night in Richmond.

Just a few feet from the Robert E. Lee statue, a three-dimensional image formed by light beams showed the face of Floyd, whose death at the hands of Minneapolis police led to a social justice movement that is still sweeping the country.

“My brother's death will not be in vain because we have people like you,” said Philonise Floyd, one of George Floyd’s brothers, to the crowd of several hundred beneath the Lee statue on Monument Avenue.

The event was the first stop on a national tour organized by Change.org and the George Floyd Foundation. Organizers said that with 19 million signatures, Justice for George Floyd became the largest and fastest-growing petition ever on Change.org’s platform.

Organizers also explained that the goal of this project was to “transform spaces that were formerly occupied by racist symbols of America’s dark Confederate past into a message of hope, solidarity and forward-thinking change.”

The Floyd family wore matching white shirts that said “I can’t breathe” across the front.

‪”It hurt me so deeply watching that video,” said George Floyd’s brother, Rodney Floyd, while speaking to the Richmond crowd. “I wish one of y’all in this crowd was there that day. I ‬know y’all would’ve pushed them down.”‬ 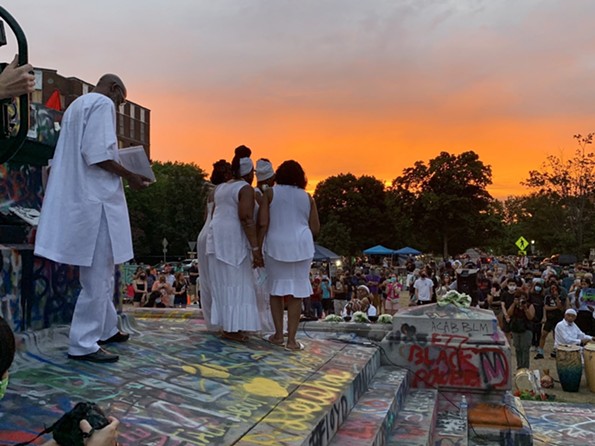 In addition to his two brothers, Philonise and Rodney, George’s cousins and nephews were in attendance. Also, Floyd family attorney, famous civil rights lawyer Benjamin Crump, spoke at length: “To them,” he said as he pointed towards the Floyd Family, “George Floyd was more than a hashtag.”

However, Crump’s presence was not well-received by all of the Richmond activists in attendance, or by the sister of Marcus-David Peters, the unarmed man killed by Richmond police in 2018 during a mental health episode.

After the Floyd Family finished speaking, Peters' sister, Princess Blanding, spoke out against Crump. Blanding said that Crump had been her brother’s lawyer but he refused to fight.

“He will only go the path of least resistance,” said Blanding. "My brother’s case did not fit the right narrative. It wasn’t a white cop that killed a black man.”

Regarding her brother's case, Richmond City Council has approved beginning the process of creating the Marcus alert, named after Peters. This alert system will involve mental health professionals responding to 911 calls when someone is suffering a mental health crisis.

City Council also approved starting the process to form a civilian review board, another of the principal demands from protesters in the city. The review board will be independent of the Police Department’s internal affairs and consist of residents able to identify issues and recommend policy changes related to policing. The review board will also be tasked with creating an oversight body for the Police Department to investigate complaints against officers.

As Richmond leaders take steps towards enacting some progressive policy and legislation that community activists have been advocating for years, members of the community are still showing up for social justice more the two months after Floyd was killed.