Taking stock of where we are — and where we're going — through Christmas cards. 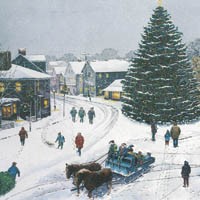 Epiphany was this week. The sixth was the 12th day of Christmas, the day the Wise Men arrived in Bethlehem, and at my house, the signal for the tree to come down. It's also the time for holiday cards to be plucked from between the books on the living room shelves where I've enjoyed them throughout the holidays.

This is bittersweet. Unlike the spruce (that's been shedding needles since it went up) the cards are much harder to toss: I appreciate each one.

And these days Christmas cards aren't to be taken for granted. Postage is expensive and perhaps they're a fast-disappearing tradition. E-mail has elbowed in. A friend received an e-card from some friends that announced itself to be “Environmentally responsible and recession-proof.” And Generation Y and Millenials evidently don't send cards. Out of some 1,000 high school and college students I've taught during the past decade, only one of my 99 cards was from a former student: Thank you Bernice Chu for your lyrically hand-sketched, crayon-colored, wintry city skyline.

I re-read the messages as I take down the cards during the post-New Year's Day lull. And I analyze them more closely to determine what this sampling of holiday greetings says about the state of things as we begin 2009.

By far the greatest number of cards, 21 percent (and all from Virginians) depict snow scenes, quite a few of them with silver glitter. Everybody I know says it doesn't snow around here any more, so this must represent wishful thinking that the coming weeks will turn back global warming and give Richmond something that accumulates.

Family newsletters or personalized cards with family photos make up 17 percent of my cards. Some were professionally photographed and printed on glossy stock. Others included snapshots, including wedding pictures. I didn't hear this year from cousins whose photo-filled, year-end newsletter was chock full of their children's achievements. Not unappropriately, one family missal reflected the temper of the times — “Well, it's been a banner year — not! Like all of you we have bid farewell to our life savings and rejoice that our overhead is relatively low.” Things got a little more upbeat toward the close: “We enjoy good health, despite a history of excesses and broken New Year's resolutions. And our jobs are not in serious jeopardy.”

Religious themes make up 13 percent of the cards. Although I've never analyzed Christmas cards before, I think religious-themed cards are up considerably from past years. Some of my favorites were reproductions of medieval and Renaissance artworks. Another religious-themed card featured a spectacular photo of the interior of the Basilica of the Blessed Virgin Mary in Baltimore from the church's staff. But I'm not sure if a fund-raising appeal qualifies as a Christmas card.

Humorous cards make up 6 percent. Just one of them was risquAc and borderline tasteless. The others were clever.

Where's Santa Claus in all this? Just 4 percent of my cards feature the jolly elf. It's always good to see the old guy, but being single and without children, my friends know he doesn't slide down my chimney anymore.

Frosty was right up there with Santa: Snowmen represent 4 percent.

Pure graphic design, a holiday wish rendered in stylish typography graces the front of 4 percent of the cards.

Family pets appeared on the front of 3 percent of the cards, including a greeting from Jack Blanton, a former Richmonder who now lives in Florida. His custom card included a picture of his dachshund, Dachota, being held by Gov. Tim Kaine alongside Richmond SPCA head Robin Starr on the occasion of animal rights legislation being signed into law back in June.

Weighing in at 2 percent each were globes and international peace messages; reindeer; natural scenes; and wreaths (a fairly unloaded image — one each from a brother and a sister — to assure no familial flare-ups at the holidays).

Finally, 2 percent feature the dome of the nation's Capitol in the snow, certainly a salute to the upcoming new administration that will occupy Washington D.C.

Finally, among many good wishes, I especially liked this printed inscription from a Richmond couple: “Hope encircles the world, A holiday wish for peace and happiness.”  S