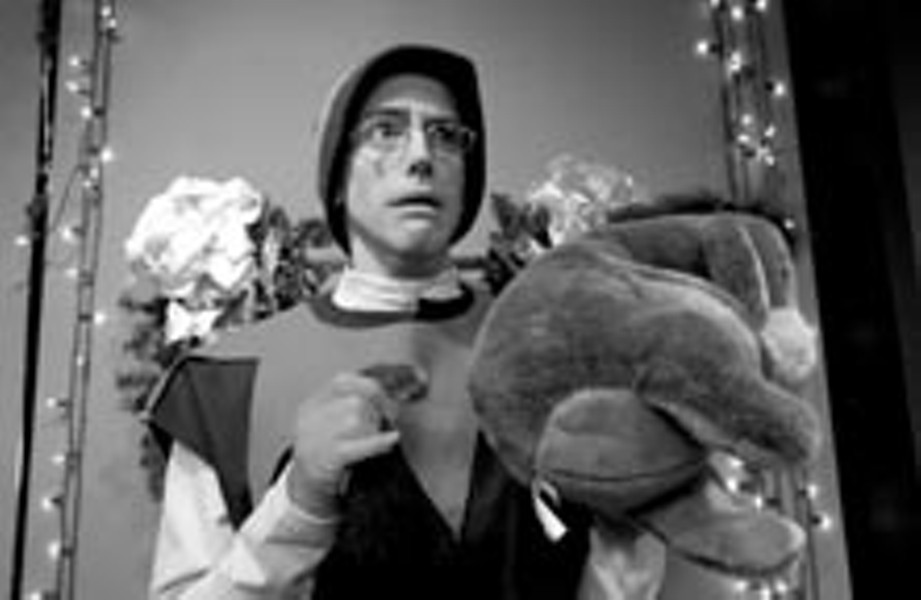 "The Santaland Diaries" and "Season's Greetings" are a pair of single-performer, one-act plays that make a perfect double bill for this time of year. "Greetings" stars Jacqueline Jones as the just-a-bit too cheerful housewife, Jocelyn Dunbar. As she reads from her Christmas newsletter to family and friends, we discover that the months preceding the holiday have not been kind to Jocelyn. In addition to caring for her infant grandchild — the son of her crackhead daughter who is currently in rehab — she's been dealing with the unexpected arrival of her husband's Vietnamese daughter — conceived outside their marriage — who showed up on her doorstep Halloween night.

The facts don't sound all that funny, but as revealed by Sedaris and impeccably performed by Jones, Jocelyn's catty asides and increasingly unbelievable holiday cheer are comic gold. The story's dark turn at the end will have you laughing in spite of yourself.

In "The Santaland Diaries," Players' veteran Robert Throckmorton delivers an inspired performance in Sedaris' autobiographical story of his job as an elf in Macy's Christmas display. The author arrived in New York with buoyant dreams of being a cast member of the soap opera "One Life to Live." Instead, he finds himself wearing a green velvet suit and pointy shoes, pursuing what he calls the "most frightening career path ever."

From his days manning the "vomit corner" to the hilariously inappropriate behavior of some of the other elves, Sedaris reveals the surreal side of Santaland. And the lanky Throckmorton, able to communicate a boatload of attitude with just a glance, effortlessly throws off punch line after punch line. The whole show is less than two hours long including intermission, making the laugh-per-hour rate one of the highest you'll ever see.

But most surprising, amidst the spoiled kids, obnoxious parents and psycho store Santas described in "Diaries," Sedaris finds a way to deliver messages on larger issues (with both black and white patrons demanding racially specific Santas, for instance). He also offers a brief glimpse of the true magic of Christmas in a final encounter with what could be the real Santa Claus. The moment is that much sweeter after the cynicism that precedes it.

These shows don't require a lot of fancy stagecraft, and that's exactly what you don't get in this utilitarian production. Savita Sinha's spare set design includes only the minimum requirement of wreaths and lights, along with a single tree and a dwarf-sized Santa. There are a few subtle lighting and sound effects, but mostly director T. Ross Aitken keeps things simple. He lets his two talented performers run, and armed with Sedaris' finely crafted hilarity, they provide a whole holiday season's share of merriment in a single night of theater. S