In some Richmond neighborhoods you can barely find bread and milk, while other hot spots have you tripping over grocery options. 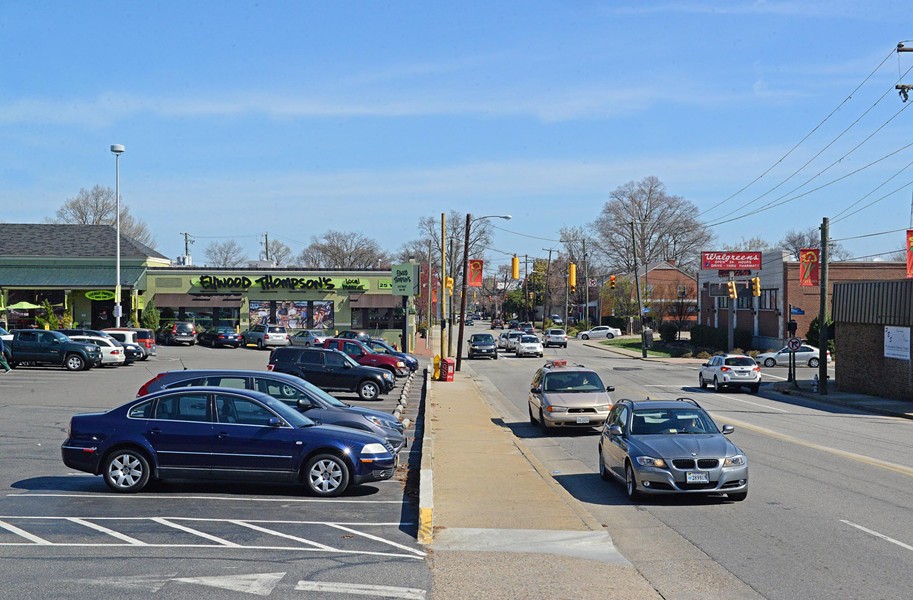 Scott Elmquist Ellwood Thompson’s is one of four grocery stores in Carytown competing for affluent customers in the West End, Museum District and Fan neighborhoods. The area also draws shoppers from such places as North Church Hill, where there isn’t convenient access to a full-service grocery store.

Considering the intense concentrations of options in some neighborhoods, why is it that others are left without a single full-service grocery store?

“I was almost in favor of having the ballpark come in [to Shockoe Bottom] because it meant that we were likely going to get a Kroger,” says Cristina Cruz, who lives in North Church Hill but drives to Carytown for the bulk of her shopping. “Not that I wanted the ballpark, but it would have softened the blow if it came with a grocery store.”

A review by a city task force found that 40 percent of Richmonders live in areas that fit the U.S. Agriculture Department’s definition of a food desert — low-income areas without ready access to fresh, healthy food.

Even as more grocers have announced plans to move into the city, the situation doesn’t look promising. A new clump of grocery stores is popping up — this time on Broad Street, where a Whole Foods is slated to open blocks away from the Kroger on Lombardy Street. And the well-liked discount chain Aldi recently announced it was opening a store around the corner on the Boulevard.

These are just anecdotes from Richmond. The situation is arguably more acute in farther west in Henrico, where Wegmans plans to enter the already crowded market.

“Of all the markets we cover from New England down to the Carolinas,” Metzger says, “Richmond is the most overstored retail food market in that region.”

One of Metzger’s writers was more dramatic in his assessment. “There’s going to be some bloodletting as a result of this crazy scenario,” columnist Duke Winston wrote.

But even with the concentration of stores serving the city’s wealthier neighborhoods, Metzger says, those areas still look like better bets than the city’s North Side and East End.

That’s because even though everyone eats, he says, there’s a lot more profit to be made by catering to the wealthy. People with higher incomes have less rigid buying habits and tend to splurge more on luxury items and impulse buys. Low-income shoppers, by contrast, tend to come to the store with rigid lists that focus on staple products on which profit margins are low.

“It’s not like retailers want to ignore these underserved areas,” he says. “They’d rather bank on a sure thing.”

There are other downsides to inner-city Richmond. Asked about the phenomenon by email, David Livingston, a site consultant for supermarket chains, fires back five minutes later with a prepared list of reasons that supermarkets avoid certain neighborhoods. He gets the question all the time, he says.

When supermarkets avoid the city, Livingston says, they think about things as varied as the low number of vehicles in dense city areas — meaning their trade area is smaller — crime rates, associated liability insurance and shoplifting losses.

Still, some retailers are starting to look at how they might expand operations around Richmond. Metzger says he has a hunch that as Richmond’s grocery wars play out, established stores such as Kroger will turn their attention to expansion in the East End and South Side. Kroger opened its 130,000-square-foot Kroger Marketplace in 2013 at the site of the former Cloverleaf Mall, near Chippenham Parkway and Midlothian Turnpike.

There’s also the possibility of newcomers. Jim Scanlon, a former Ukrop’s and then Martin’s executive, has been quietly working to open a chain of grocery stores since he left the company last year.

The stores would focus on areas such as the East End, which have been clamoring for a store but are unattractive to traditional grocers.

Scanlon says he thinks he’s found a model that would work in those neighborhoods. He envisions midsize stores that carry a good product mix — including high-quality produce from both traditional suppliers and local farms.

Scanlon says he understands why Martin’s and Kroger locate where they do. “Some of your more profitable things are your perishable items, your prepared food and some of your higher general merchandise,” he says. “And in areas with more disposable income, higher-margin items are sold.”

He’ll be able to offer high quality at lower prices because of his direct relationships with suppliers, he says, and by bringing his executive experience without a traditionally commensurate price tag, he can cut overhead without “scraping the bottom line.”