Printmaking Studio Two Three does what it can to keep artists in Richmond. 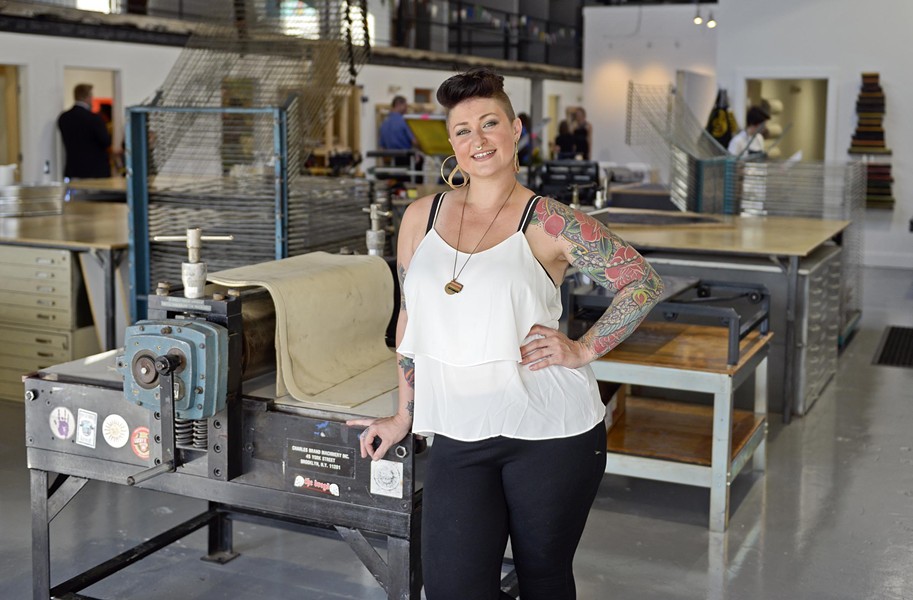 At 7,000 square feet, the white brick building that houses the nonprofit printmaking studio Studio Two Three has a large and airy feel — exposed ductwork, natural light filtering through skylights, and open studios that line the ground and mezzanine levels.

The main studio floor hums with activity. People are working to transfer a giant map of Richmond to a woodblock, experimenting with best-practice printmaking or finishing up final decorations for a donor appreciation party. The atmosphere seems to pulse with excitement and camaraderie. But these artists, from their 20s to their 60s, have their sights set on more than having fun.

“The artists at S Two Three have a wide range of goals: T-shirts, signs, flags and exhibition work,” executive director and co-founder Ashley Hawkins says. “There’s actually less dabbling than you might expect, as we’ve seen a rise of the young entrepreneur.”

This fall, Hawkins says the studio will offer classes that teach technical, hands-on skills, and launch a professional development series with courses about taxes, hiring an accountant, choosing a retail space, and photographing and marketing your work.

“Basically,” she says, laughing — “what you didn’t learn in art school. And because we learned it on our own, we can help others navigate the process.”

Founded in 2008 by friends — Hawkins, Sarah Moore, Tyler Dawkins and Emily Gannon — who were recent graduates of Virginia Commonwealth University’s School of the Arts, the studio established its first home in a tiny Plant Zero studio. In late 2010, they expanded to Main Street and a 3,400-square-foot space. This spring, through the financial support of private donors and an Indie Go Go crowd-funding campaign that together raised more than $50,000, the communal print shop moved to Scott’s Addition, a neighborhood that Hawkins and many others call the “it” spot in town.

“We knew in April 2014 that we needed to either renovate or move,” Hawkins says. “The Main Street studio had four artist’s studios. Now we have 20. Collaboration is one of the biggest allures of printmaking and we consciously wanted open studios so that people could interact.”

The 24-hour studio also features a conference room, a computer lab, a traditional black and white darkroom, a communal kitchen, a changing event and gallery space, a classroom, a library and lounge area, and shared printing presses.

“Every transition is great, but this one just takes the cake,” adds Rosemary Jesionowski, an associate professor of fine arts at the University of Mary Washington and a studio advisory board member. “The new space is more pleasant and more spacious with phenomenal light. It is a breath of fresh air to S Two Three.”

Hawkins’ experiences haven’t just been achieved through trial and error. Realizing that to make the studio a success meant having an administratively savvy executive director at the helm, Hawkins did like any startup — invested in her own education and completed her master’s degree in art administration in May 2014.

“Maybe I’m devaluing my arts capacity, but I’m pretty much cut out to be an arts administrator,” says Hawkins, who still does printmaking occasionally. “Here at S Two Three, I get to do it on a micro and macro scale: I can organize the shelves, write a grant, or run a board meeting. My graduate work in arts administration focused on the gap that takes place between a start-up nonprofit and a functioning organization with a paid staff. I wanted to know, how do you make the jump?”

To that end, she researched start-ups to find out how they could grow rapidly and sustain that growth, she says, “so that we can focus on programming rather than finances.”

The studio seems to have made that jump. It recently received Mary Morton Parsons and Virginia Commission for the Arts grants. Although Hawkins is the only full-time staff member, she and the seven-member advisory board hope to add a part-time position in the next year. More immediate plans include inviting their first visiting artist for a residency this fall, starting formal vocational training for interns, and launching open studio nights in collaboration with other galleries and businesses in Scott’s Addition.

“Our niche is about supporting professional artists and enabling them to stay in Richmond,” Hawkins says. “Richmond has become a tourist destination for all things art and culture: from VCU and the [Virginia Museum of Fine Arts] to other great museums, local breweries and award-winning restaurants. But in order to really be that creative city, we need to have places like S Two Three where artists can work affordably.” S