"Downfall" recounts the macabre end of the Third Reich. 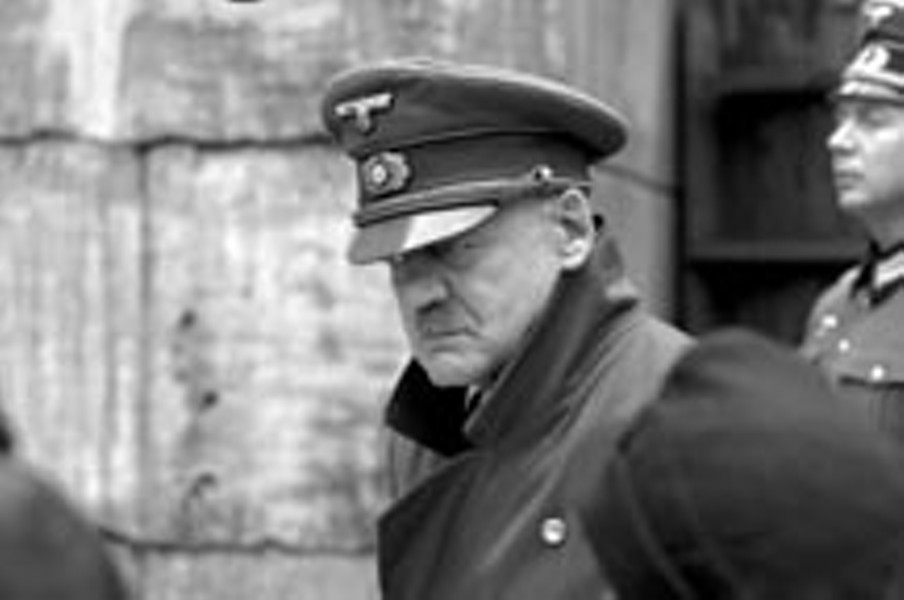 Were the Oscars an international affair, it would have been a crime to deny Bruno Ganz a Best Actor statue for his portrayal of the F�hrer. A stooping, slimy rat occasionally sniffing out of its hole, Ganz's Hitler becomes ever more pallid, hunched and paranoid as the Red Army tightens the noose. It is midnight for the Third Reich. The Soviet Union, having won the eastern front, has now begun its final assault on Hitler's beloved city. The once-commanding speaker festers and boils in his war room, writhing in an apoplectic fury of spit and slander as he is informed of each day's defeats. Grim generals frightfully check each other's eyes in dismay as their leader shouts about imaginary armies and magic weapons.

And yet they do nothing. Most of these elite men and women remained loyal and attracted to Hitler until the very end, binding together ever faster as their circumstances became ever more hopeless and their leader ever more indifferent to their fate. Quote the beloved father of national socialism: "We have to be cold-blooded. We can't think of these so-called civilians now." Who could follow such a man?

The answer to this question remains somewhat elusive, despite two and a half hours of intense and often gut-wrenching scrutiny. Explicable or not, there is plenty of insanity to go around. In the city above, adolescents gallantly carry on a futile resistance. Below, their leaders callously relieve their own culpability and guilt, as when the ghoulish Joseph Goebbels (Ulrich Matthes) puts the remainder of the Aryan race within his distinct political ideals: "The German people chose their fate. They gave us a mandate. And now their little throats are being cut."

Heinrich Himmler (Ulrich Noethen), head of the SS, is planning a treasonous surrender to Eisenhower, wondering aloud in all seriousness whether he should shake the general's hand or give him the Nazi salute. Himmler at least saw surrender as the only real way to save anything. Hitler, for his part, would rather the Fatherland burn along with himself; he commands Albert Speer (Heino Ferch) to destroy the country's infrastructure, including its sources of water and electricity (an order Speer thankfully disobeyed, saving countless lives).

Though not a particularly artistic work, "Downfall" (which is in German with English subtitles) is a first-rate historical reconstruction, with exacting attention to detail and accuracy balanced by Hollywood-quality realism and a superb cast. The military action, as in most recent war pictures, owes a great debt to "Saving Private Ryan," but fighting scenes are limited. This is a movie with a lot of behind-closed-doors moments, but the tension is kept taut by the inevitably macabre subject matter. Between Hitler talking over tea about how best to shoot oneself and Goebbels' wife, Magda (Corinna Harfouch), gently murdering her own children, there is no risk of falling asleep.

Based upon multiple sources and some first-person accounts, the film has been criticized in some quarters for treating its subjects with too much humanity. It's difficult to know whether that is some odd kind of hype or the overreaction of people who haven't actually seen the movie. It would be hard to say that anyone besides civilians and a few (and I mean a few) do-gooders receive a sympathetic light here. If anything, Hitler's decline into a sickly, whimpering beast inspires fits of glee. As often as it is frightening to see him boil over and howl like a child, it's also downright thrilling.

The truly sad part of this story is how many went with him. What "Downfall" shows is how capable and logical people willingly gobble up the poison of a fanatic ideology. Though we see much evidence of stubbornness, pride, hatred and outright madness, we are left without a definitive "why." Perhaps that question is unanswerable. Juliane K”hler as Hitler's wife, Eva Braun, speaks this sadly comic elegy for all ideologies in her refusal to leave Hitler's side. "It may be really crazy," she says with chilling spirit, "but I'm happy to stay." How do we make sense of that? (R) ***** S