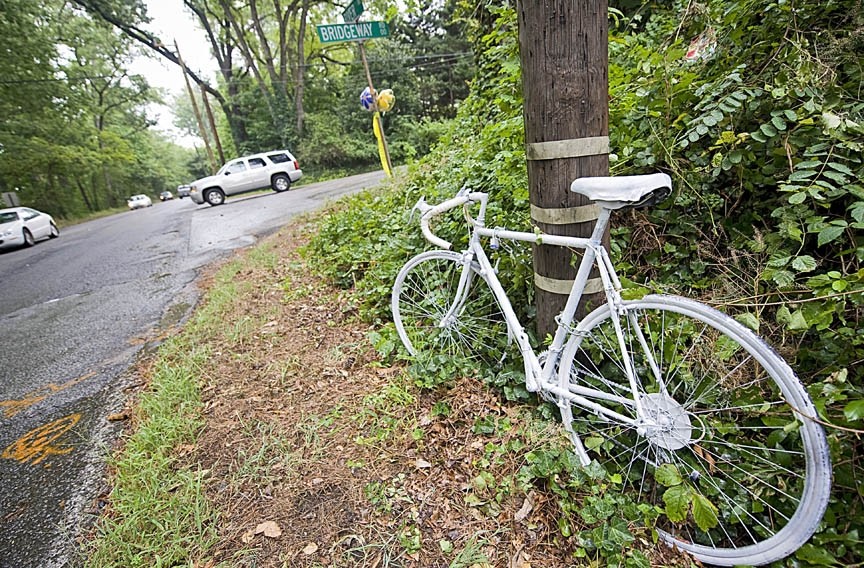 Today’s Boston Globe carries a story about bicyclists’ outrage over a hit-and-run death of a rider and the justice system’s response.

The facts of the case aren’t that different from Elias Webb’s, who this week was found guilty by a jury of hitting and killing 24-year-old Lanie Kruszewski and leaving the scene. Yesterday, the jury recommended Webb serve a three-year prison sentence.

There are, however, at least two important points that distinguish what happened in Boston from what happened in Richmond. First, there was more evidence in the Boston incident, including video from a traffic camera that clearly showed a truck driver hitting the cyclist and not stopping. Second, a grand jury that saw that evidence declined to hand down the indictment necessary to bring charges against the driver, who ended up walking away without so much as a ticket.

Citing widespread bias against riders, Josh Zisson, a lawyer specializing in bicycle-related cases, tells the Globe, “many cyclists view juries in criminal cases as a litmus test of how they are embraced and protected by the communities in which they live.”

So if the jury of 12 Richmonders not only found Webb guilty, but also thought his acts merited three years in a state prison, does that mean Richmond cyclists should feel embraced and protected by a community many have long felt is hostile to cyclists?

I attended most of the Webb trial, primarily as a friend of Kruszewski’s family. (I know, like and regularly hang out with her surviving two sisters, Jackie and Leah.) I also occasionally bike to Style’s downtown office from my apartment in the Museum District. In the context of the Boston case, it’s difficult for me not to find the Richmond jury’s verdict and sentencing recommendation a little heartening.

Am I the only one feeling at least moderately encouraged that a random group of perfect strangers could relate to Kruszewski's story? I reached out to three Richmond area cycling advocates to get their take on the verdict and what it might say about Richmond. Their reactions are mixed.

Michael Gilbert, a co-founder of Ride Richmond, says the jury’s finding of guilt sends an important message: “that bicyclists are humans and we will treat them as such.”

For me, the fact that he was found guilty, by a jury of his peers, is the most important part. The sentence matters, but the fact that he was found guilty sends a clear message that bicyclists are humans and we will treat them as such. There is a lot of good energy toward cycling education, and this shows that educating motorists is equally as crucial -- a true two-way street. Do not text and drive. Do not speed when driving. Do not tailgate cyclists. Do not pass with less than two feet. When the public realizes they have lost a daughter; a mentor; a loving, caring and talented young professional -- they take notice.

Champe Burnley, president of the Virginia Bicycling Federation, takes a different view. He says he can’t shake the feeling that “Eli Webb got off very easy for what he did.”

Webb’s actions caused an innocent person to die. There was no evidence that Lanie was doing anything wrong. In fact, she was doing everything right: The driver in front of Webb [Beatty] testified to this. He had no trouble seeing her. I think there’s a general attitude that if you’re riding a bicycle and get hit, you get what you deserve. The opposite should hold true: Our roads are not for cars, they are for people and it is everyone’s legal duty to make sure their actions don’t endanger the lives or safety of others whether they are drivers, cyclists or pedestrians. If your actions cause harm or death to another individual, you will be held accountable and pay for your actions.

First, cyclists often do get the short end of the stick, and just reading through the comments on the Boston-Wellesley incident points to the bias. A guy gets run over by a tractor-trailer while obeying the law and a bunch of fools chime in about how bicyclists are all scofflaws and deserve what they get. That attitude is ubiquitous and it impacts the ability to indict and try someone.

Secondly, I have frequently argued against the claim that offenders in bike crashes get lighter sentences. Webb will likely get more jail time than the DUI driver that killed the VCU student last year. He was twice the legal limit and got about 1.5 years jail time and a one year suspended license.

And that raises the third point: We treat driving in the U.S. as a right, not a privilege. It is stupidly easy to get a license and even easier to keep it, even if you are a menace behind the wheel. And if you do lose your license and continue to drive, the penalties are pretty minor. Scroll through the court records for pending cases and you’ll find people charged with things like driving on a suspended license, sixth offense, along with many other violations. I don’t think we should lock people up and throw away the key with their first infractions, but when you repeatedly demonstrate you are unwilling to abide by a standard of conduct and safety, then you can spend some serious time in jail. That person has contempt for the law and for the safety of the general public.

So, what do you think, Richmond? Our comments thread is open.