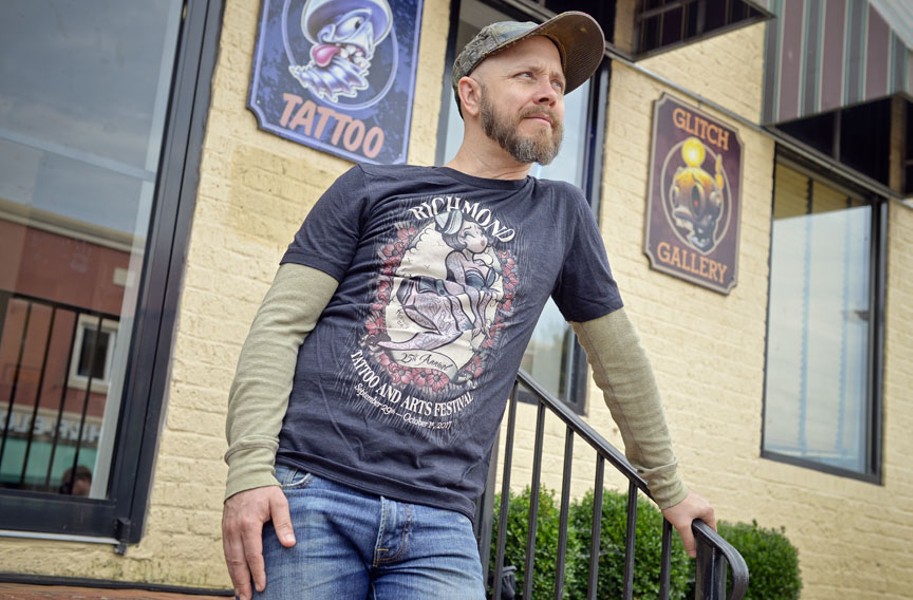 Come for the art seminars and stay for the air sex.

The 27th annual Richmond Tattoo, Arts and Music Festival is not just about the more than 150 local and internationally known tattoo artists coming to River City to ink guests, although there will be some major names from the tattoo world.

Fans of the reality show "Ink Master" will recognize familiar faces like Ryan Ashley Malarkey, known for her black-and-white jewelry tattoos, and Anthony Michaels, title winner from seasons seven and 10. "Ink Master" winner Cleen Rock One summed up the festival's position at the top of the heap by recently tweeting: "I'm only doing one tattoo show this year and that's @RichmondTat2Con."

Local tattoo artist Jesse Smith of Loose Screw Tattoo and Kenny Brown, co-owner of Jack Brown's Tattoo Revival in Fredericksburg, are the organizers for this year's event. Smith recalls that prior to the festival's inception, it had a run as Tattoo Club from 1988 -1992. The original inspiration for a festival was to provide a place for tattoo artists to meet up to share tips, tricks and secrets.

What's changed over nearly three decades is the festival's enlarged focus, which now encompasses art and music in addition to ink.

"Tattooing is one of the youngest and biggest art movements in recent history," Smith explains, "and due to it running parallel to the dawning of the internet age, it's been catapulted into the mainstream."

He says Richmond was ahead of the curve, which helped establish it as an early tattoo mecca.

"This event reminds everyone who lives in Richmond, as well as those who watch from afar, that we're an artistic community who've been carrying the torch of artistic innovation for over 30 years, since back before tattooing or getting tattooed was considered cool."

Although Smith has been an artist his entire life, it was only once he became a tattoo artist 22 years ago that he noticed a real divide between the tattooing and art communities. As the years passed, he saw more artists making their way into the tattoo industry.

"Those worlds are currently colliding and I›m excited to help build that bridge," he says.

The three-day event will include a full schedule of artist-led seminars as well as the creation of art during the event. Among the artists participating are Matt Lively, returning for a second year, prolific illustrator Sterling Hundley and Esao Andrews, known for his surreal artwork for the band Circa Survive and DC Vertigo Comics.

With more than 20 years of professional experience as an artist, Hundley is speaking on the Evolutionary Process of Art, detailing 10 things that can change the way people think about their work.

"Events like the Art Academy continue to expand what people think they know about Richmond and Virginia at large," Hundley says. "We run deep here in this city, in history, impact and integrity. Tattoo artists are blue collar grit through and through and work harder than any group of people I know."

Andrews' topic is Finding Your Artistic Voice and addresses his journey to adulthood while pursuing a life of art making as an art handler, at an art supply store, making interactive web games and animation, toy design, silk-screening skateboards, oil painting, spray painting murals and comics. He urges people to experiment throughout their careers.

"We're living in a time where the internet's given creative people the opportunity to show off their pursuits on a global scale," Andrews explains. "Showing photos of things isn't enough. Community is everything and with more people being able to work on their dreams, the community has the potential to be huge."

As for why Richmond is such an inked up town, Smith has a theory.

"All of the best tattoo artists in the world have made their way through Richmond to participate in this festival," he says, noting that while here, those artists have adorned the bodies of Richmonders in a way that inspired local tattoo artists and wooed the inked and uninked.

"In return, the Richmond scene has been marinated with top notch work. Multiply that by 30 years and we're inevitably going to be a front-runner when it comes to the quantity and quality of our tattooed community."

The early part of each festival day is dedicated to entertaining the entire family, but from 8 p.m. through 2 a.m., the festival evolves into a full-on party for adults only.

As for the air sex competition, Smith says they're constantly on the lookout for entertainment that blurs the line of what most people consider normal.

"Initially, it may sound like a raunchy audition for a potential partner," he says. "But once you experience it, you'll realize that it's more of a comedy act that revolves around a topic that most of us enjoy."