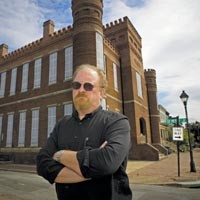 The Leigh Street Armory in Jackson Ward may not have windows, floors, working utilities or even any immediate prospects, but it does have a new title: National Historic Landmark.

Selden Richardson, an architectural historian and author who's worked for the armory's preservation for nearly 15 years, wrote the landmark application for the 119-year-old, city-owned building and submitted it earlier this year. The national designation was granted Sept. 19, Richardson says.

The significance of winning the designation, he says, “is nothing,” because for all intents and purposes, “there doesn't seem to be the will or the leadership in the city to rectify” the facility's slow decay.

“It doesn't protect the building in any way,” Richardson says of the federal designation. “The entire purpose in seeking the recognition was to try to draw attention to this building and its place.”

The building has drawn plenty of attention in the past. Various proposals through the decades would have repurposed the building and restored it. The building's housed a public school and a World War II-era facility for black GI's on rest and relaxation. Its last occupant was the Black History Museum, which left in the late 1970s after a fire burned a hole in the roof and left the interior exposed to the elements. Its interior is in decay because of lack of maintenance.

“The city basically locked the doors and left it,” Richardson says of a condition that continued until efforts to stabilize the building and protect it succeeded in the late 1990s.

Despite the years of neglect, the armory is one of three such buildings remaining in the city. All date to about the same late-19th-century period, but Leigh Street also is one of just three such armories remaining nationally that were built specifically to house black military units.

“The construction of this building signaled parity with other white organizations in the city,” Richardson says, explaining the old militia system that predated the modern National Guard. “There were five armories in town at the time, four of them being white. This was just a generation after the Civil War and this was an incredibly important organization for blacks.”

Nearly all past efforts to repurpose it have ended because there was lack of agreement within the Jackson Ward community about an appropriate new owner or use.

“This building is unique in that it sits at the intersecting lines of African-American history and bad city leadership,” Richardson says.