History Comes Alive in Richmond With Fashion From “Downton Abbey” 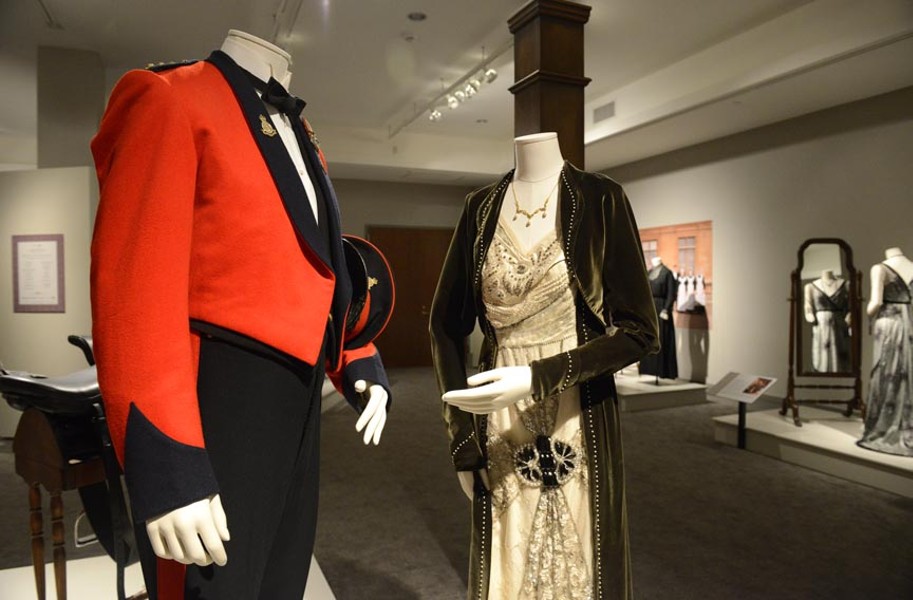 Fans of the British television show — and they’re legion in Richmond, flocking to viewing parties and Downton-themed events — will almost feel as if they’re at the intimate fashion show Lady Mary attended with “Dressing Downton: Changing Fashion for Changing Times” at the Virginia Historical Society. Airy, high-ceilinged new galleries have been carved from former offices to allow room for expansive traveling shows such as this gem.

A major advantage of spacious galleries is the ability to walk around the costumes to inspect details from all angles, something that was impossible at the show’s last stop, the Biltmore in North Carolina, where mannequins were placed against walls throughout the house’s rooms. Lady Mary’s dusty pink silk evening dress, used only in a dining scene where she was seated, reveals a dramatic back accented with tiny faceted buttons and a black net train.

The exhibit uses 36 ensembles to highlight the variety used for the show, including many vintage pieces which often need extensive restoration. The beading on original gowns develops a patina over time that’s impossible to achieve with modern-day beads. Sometimes, the designer finds garments that are a bit too far gone, but elements are usable, enabling the design team to incorporate vintage beading into a new dress. Bits of trim, lace or embroidery from original garments find their way onto something freshly made in the workroom.

Some costumes already have been featured in other productions when they land at “Downton Abbey.” Lady Mary’s high-waisted evening dress with silk overlay and black and silver starburst pattern, a definitive style notable for not requiring a corset, saw time in the film “Finding Neverland.”

“That speaks to the life of these costumes,” says Paul Levengood, president of the Virginia Historical Society. “A hundred years from now, you’ll watch a movie or TV show and see that dress again.”

Anna Robbins, the show’s costume designer, studied law before discovering a passion for costume design. She joined “Downton Abbey” as costume designer for season five with very definite ideas about the characters’ sense of fashion. She’s said her color palette depends on the character, that the type of pink she’d put on Rose would be a powdery pale pink, while Edith would get a peachier hue.

As with the show, the exhibition chronicles the 1910s and ’20s, a period of enormous change in terms of social structure, the effects of World War I and blossoming opportunities for women. But the exhibit isn’t all upper-class women’s garments. Men’s outfits, such as hunting party attire, and servants’ uniforms flesh out the picture of a true upstairs, downstairs world. Who knew ladies’ maids changed the type of apron they wore for evening service?

Local costume designer Maura Cravey acknowledges having a tough time not touching each piece to discern the fiber and how it was made. “I’m impressed by the attention to detail in the new costumes,” she says. “They honored each era.”

For anyone who’s ever imagined walking through Downton Abbey or any English country house, the opportunity awaits at Virginia House, the 16th-century Warwick Priory manor house. Scheduled for demolition in 1925, it was taken apart and reassembled on the banks of the James River in Windsor Farms. Now owned by the society, the house is open Tuesdays through Thursdays from 10 a.m. to 4 p.m. during the exhibition’s run for those eager to imagine the kind of rooms the Crawleys might have inhabited.

“Some see a costume exhibit and wonder why a history museum would do something like this,” Levengood says. “I say do anything that makes history come alive, that gets people to be a part of it somehow. History is not remote. Putting yourself in the mind of a person from another time: History can do that. That’s a valuable role for us to play.” S