Imbibing at the VMHC with the BrewHaHa and "Cheers, Virginia!"

An old school copper still on display that is part of the "Cheers Virginia!" exhibit which opens this Saturday, Aug. 6 in conjunction with VMHC's annual BrewHaHa festival.

"We'll just lay there by the juniper/While the moon is bright/Watch them jugs a-filling/In the pale moonlight." - Bob Dylan's "Copper Kettle"

Jamie Bosket, the president and CEO of the Virginia Museum of History & Culture, says that it's not only totally right and proper for the oldest cultural institution in Virginia to host a craft beer festival, it's a matter of historical import worthy of serious study.

"If you look back at the history of beverages and their creators, you see a very American story," he says, talking about the museum's new "Cheers, Virginia!" exhibit, which will open on Saturday, the same day that the VMHC throws its annual one-day BrewHaHa craft beer festival. The history goes in-depth even if the topic seems lightweight, Bosket maintains. "History is entirely connected to our life and how we enjoy it and live it."

"Cheers, Virginia!" which will run through January 2023 in the museum's David and Susan Goode Gallery, tells the story of Virginia's fascination with the hooch -- all kinds of hooch. The 1,700-square-foot display will explore the Old Dominion's early cider making, hard-won wine cultivation, illegal moonshine running and the contemporary success of craft beer entrepreneurs. It also includes tributes to lesser-known figures in our past, like Clarksville's John June Lewis, the man behind Woburn, the first Black-owned winery in the U.S.

The overview utilizes 50 archival artifacts, most from the VMHC's collection, to tell the tale. "Some people might say, 'Oh, it's just alcohol," says exhibit curator and co-founder of the BrewHaHa, Paige Newman. "But this goes a little deeper ... you have the history of making it and the history of consuming it and also the history of glassware and serving it, and each of those parts can be a history lesson in and of itself."

"Cheers, Virginia!" is something of a sidebar, Bosket says, to the recently renovated museum's debut "Our Commonwealth" exhibit. "'Our Commonwealth' is as much a cultural study as it is a historical study of Virginia separated by regions. Here, we talk about the deep roots of moonshine in Southwest Virginia, the beer making in the valley and so on, and we are teasing out Virginia's relationship with liquor in a much bigger way." 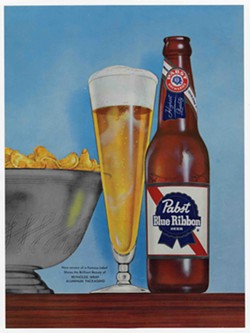 Bryan Condra, the exhibit's designer, says that the original idea was to have "Cheers" be a part of the museum's grand reopening in May. "But it was impossible for the staff to pull it off, we had so many other things we had to do. But the BrewHaHa is an event we do in the first week of August. So we just sort of scheduled this opening with it, and that seemed perfect. Plus it helped us to take time to properly put the exhibit together."

The treasures in “Cheers” include a little bit of everything: an ornate liquor chest given to William Cabell, Jr. by the Marquis de Lafayette, a pre-prohibition Virginia liquor taxation stamp, a colorful period scarf that reads, "Repeal the 18th Amendment," and a large copper still dating from 1860.

But Newman is fascinated most by the historic Bartmann jug on display.

"The Jamestown Foundation loaned us the jug, fully intact," she says. "This is a stoneware jug made between the 15- and 1600s in Europe, and discovered in an archeological dig at Jamestown. It's beautiful. It has on the neck the face of a bearded man and there's a seal on the body of it." They don't know much about this container, which adds to its mysterious allure. "Whose was this? How did it stay intact? These were mass-produced in Germany. When did it come over here?"

The Founding Fathers are front and center in "Cheers, Virginia!," especially George Washington, whose fluting drinking glasses are on display.

"At one time, Washington was the largest producer of whisky in the United States," says Bosket, the former vice president for guest experience at George Washington's Mount Vernon in Fairfax County. "Whisky was a profit-making enterprise that was encouraged by his farm manager, who was from Scotland. It doesn't take much imagination to see how that went down. [Laughs].You have a Scot encouraging a farm owner into producing hundreds of acres of grain and turning it into liquid and making whisky and selling it."

The exhibit details how, at Mount Vernon today, whisky is still made with a Colonial-era recipe using 18th century techniques. "They're grinding the corn and rye in the water-powered stone grist mill," Bosket says, "and then bucketing it into the copper pot stills and making whiskey, just as Washington's enslaved workers and hired help did." (Caution: George's output was sold clear and unaged. Almost like moonshine, it would probably be undrinkable by today's standards)

As the exhibit shows, Thomas Jefferson clearly loved wine but he was never as successful in his wine making endeavors as Washington was with whisky. "Virginia's climate lends itself to certain grapes but it's taken a long time to figure out which grapes and the right places to make a really good wine," Bosket says, adding that the growing of wine was aspirational to the early settlers. "There was a proclamation at Jamestown requiring the planting of grapes in the hopes of making wine. It just took a couple hundred years to do it right."

The inclusion of Washington and Jefferson notwithstanding, the story of Virginia spirits is one of ordinary people, Newman says.

"The people making up history are regulars like us, we're making the bulk of history. You get people in the door with the star power, but then you hopefully keep them coming back because you are telling their story, everyone's story." During the exhibit’s run, the museum is planning two BrewHaHa-styled festivals featuring showcasing Virginia whiskies ("Virginia Distilled" on Sept. 17) and wines (Oct. 15).

Modern spirit crafters are a part of the exhibit, Bosket says. "We wanted to talk about people today as well as people of the past because we want to make this relevant to today's audience."

One of those modern makers, Danny Fain of Ardent Craft Brewery, is a history buff who is thrilled to be a part of the story.

"We donated some of our big wooden barrels and some older kegs that have Ardent inscribed on the side," says Fain, a Virginia Commonwealth University history major who loves experimenting with antique beer recipes. "For previous BrewHaHa's, we've had a battle of the brews where they give us brewers a historic recipe and we make a beer based on that." Unfortunately, that won't be happening this year, but Fain has something special cooked up for Saturday. "Along with Bill Cavender of Black Heath Meadery, we've brewed a Braggot, a beer/mead hybrid that will be available at the VIP tent." 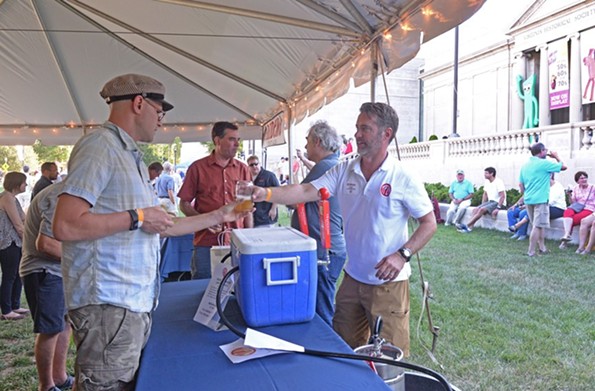 "The BrewHaHa is a bunch of people who appreciate craft beer and who appreciate history, a real crossover event," says Fain. "Ardent has been a part of it since the exception, and we're excited about helping to open this exhibit." Liquor making is a big part of the city, as it's always been, he adds. "Most of all, I look forward to learning something."

The Fifth Annual BrewHaHa festival on Aug. 6 at 6 p.m. at the Virginia Museum of History & Culture, "Cheers, Virginia!" runs through Jan. 29, 2023 at the museum. For tickets and more information, go to virginiahistory.org.