Hillside Court May Bring in the Red Berets 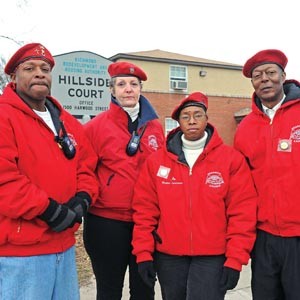 After three fatal shootings at public-housing complex Hillside Court this year, people are thinking about taking matters into their own hands.

The Richmond chapter of the Alliance of Guardian Angels has offered to train residents as unarmed safety patrollers to help deter crime.

“That's what we try to do: deter,” says Jo White, commander of the Guardian Angels' Richmond chapter. The presence of the red-beret-wearing Angels often is enough to discourage violence, White says, simply because it shows drug dealers and troublemakers that someone's watching.

Dealers “just want to make money,” she says. “If you mess with their money, they just want to move on.” It's not known whether drugs have any connection to 2011's three Hillside Court shootings. Alex R. Arrington Jr. and Coraliss A. Logan were shot and killed Jan. 1. Regina Doctor and another woman were shot Jan. 18; Doctor died and the other woman survived.

For their safety patrols, the Guardian Angels recruit volunteers, male and female, who are at least 16 years old and have no serious criminal convictions. White says 14 people in Hillside Court already have expressed interest in getting involved.

With the help of members of Richmond police, the Angels provide free training in first aid, cardiopulmonary resuscitation and karate. They're trained to defuse conflict, not start fights, White says. If necessary they'll detain a suspect and wait for police to arrive.

The group began working in Richmond in the summer. It patrols Highland Park, Barton Heights and on some weekends, the area around Virginia Commonwealth University.

The Hillside Court tenants' council was scheduled to meet Tuesday to discuss giving the Guardian Angels permission to patrol the community.