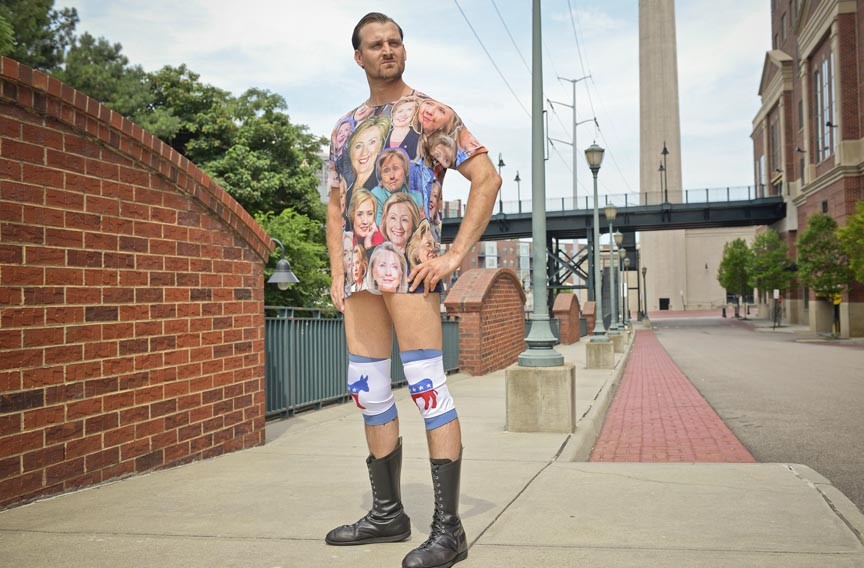 A local real estate investor has a secret double life as a professional wrestler — or, not-so-secret since being featured on NPR, in the Washington Post and Sports Illustrated this week. He’s making waves for the villainous character — known as a heel in wrestling terms — that he’s developed for the Appalachian Mountain Wrestling program: the Hillary Clinton-loving Progressive Liberal.

Reached by phone in eastern Tennessee where, in a Hillary Clinton shirt and briefs that say "Progressive Liberal,” he’s about to take the stage, Daniel Harnsberger, 36, talks about his newfound fame and infamy in the wrestling ring.

How did you get into wrestling?

I think I watched my first wrestling tape when I was 10 years old and watched every Saturday morning from then on. I grew up in the mean streets of Midlothian. I graduated Midlothian High School in 1999, and I went to college because that’s what I was supposed to do. But I always planned to train to wrestle. I did right out of college. I was hot and heavy for a while, then I went part-time. I came back to it in 2014, because I figured there was only so much more time my body could give to it.

"I voted for Hillary. I use the word 'character' in interviews — for lack of a better term. But it’s just me, turned way up." tweet this

How did you come up with this character?

Well, I’m a left-leaning liberal to begin with. Back in 2014, I was trying to think of a way to incorporate that. I’d be speaking on how I really think for interviews in front of crowd. I just naturally could play off their boos and jeers. I tested marketed [the character] in front of a small West Virginia crowd, like 30 people. Pound-for-pound the reaction was great. This is two months after Trump had announced his candidacy in June of 2015. I don’t like to use the word character. It’s not like I’m a Christian conservative putting on a character. I voted for Hillary. I use the word “character” in interviews — for lack of a better term. But it’s just me, turned way up.

What sort of things do you say to rile up the crowd?

I’m picking apart their way of life and try[ing] to force my morals over theirs. It’s an attack on their way of life. The coal thing — coal is a way of life here, but my real-life point of view is “let's move on.” It’s a finite resource, and there’s no such thing as clean coal. I make fun of how these people don’t leave home. They don’t want to move away from their mommy and daddy. They get trolled pretty hard on that. “Oh, four-lane highways, oh, God” – that sort of thing. When the Progressive Liberal goes to California or Canada, I’ll probably be cheered big time. But when he's in West Virginia, or Southwest Virginia, he’s the heel. Those are the primary areas I wrestle in, and it gets a strong response.

Does spending a lot of time in Trump country make you more sympathetic to their view?

Beau James, a mentor of mine — he lives in East Tennessee: He’s logged a lot of miles in these parts, and he’s been able to smarten me up to the people, the way of life, the mindset and that's helped. Beau’s a tobacco-chewing, God-fearing hillbilly, but he’s a smart dude. But I’ve traveled around the world. I’ve been the Southeast Asia, India, Australia — I think that’s given me a well-rounded perspective.

Do audience members ever try to engage you after the event?

I try not to talk to them, and they don't talk to me. Your average Trump supporter that I’m in front of, quite often they’re just not paying attention. These are broad talking points. I’m not speaking on Betsy DeVos’ plan to eliminate public education. It’s just: “Screw you for voting for Trump.”

I’ve been a real estate investor for a number of years. And I just got a license as an agent so I could open up a property business. With Steadfast Property Management I manage about 30 properties for other investors. I live in the East End — technically eastern Henrico, like five houses from the city line.

Have you ever wrestled in Richmond?

Only once in 2014. I want to bring it to Richmond, but it seems hard. Appalachian Mountain Wrestling — it gives back to the community, to a group or cause. We offer 80-20 splits and all the concessions to the group or venue offering to run the event, so it’s no risk on their part.

It’s good family entertainment at the end of the day.