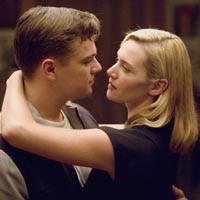 Kind of like the 1950s mainstream culture it tries to probe, the new Leonardo DiCaprio and Kate Winslet movie, “Revolutionary Road,” is surface-level attractive. DiCaprio and Winslet, reunited for the first time since their voyage in “Titanic,” are nicely paired again as an ill-fated couple whose marriage disintegrates amid lush lawns and big cars.

The movie was directed by Sam Mendes (Winslet's husband), whose other treatise on suburbia, “American Beauty,” echoes “Revolutionary Road.” But even with its competent charms this film feels less like a revolution and more like a one-note salute to conventional wisdom: Suburbia in the '50s, it tells us, for all its comfort, was oppressive. Crazy.

The story, based on a novel of the same name by Richard Yates (adapted by Justin Haythe), follows Frank (DiCaprio) and April (Winslet) Wheeler, a recently married couple who've realized that the so-called good life is really a trap. Frank is a low-level executive at a Manhattan sales office and April is a housewife at their quaint, two-story cottage in the good part of the subdivision. Even the good part has its pests, we learn, such as self-centered neighbors (David Harbour and Kathryn Hahn) and a chipper, nattering real-estate agent Helen (Kathy Bates), who sold them the house, and who, for some strange reason, feels that gives her leave to drop in on occasion.

Helen has a son, John (the striking character actor Michael Shannon), whose own verbal deluge differs only in point of view. John is on vacation from the funny farm, a place he frequents because he tends to say what's on his mind. And what's on his mind is always subversive. Busy pointing out the elephants in the Wheeler's rooms, he's the elephant in the movie. The way he confronts the couple's pie-in-the-sky dreams is humorous, even laugh-out-loud funny at times. But from the perspective of the present day, also absurdly obvious.

When Frank and April's plans sputter the fallout is intended to be explosive, but the ensuing histrionics scream “acting!” all too loudly. DiCaprio and Winslet do a fine job, but you may end up being the one feeling stifled, because “Revolutionary Road” often plays like a real 1950s melodrama, maybe a Douglas Sirk film, without the wonderful colors, subtext or Rock Hudson. The movie is a modestly entertaining diversion, but, like the way of life it investigates, one that mostly seems phony. (R) 119 min. HHHII S