"Someday in the Park With George" takes an old monument to new places. 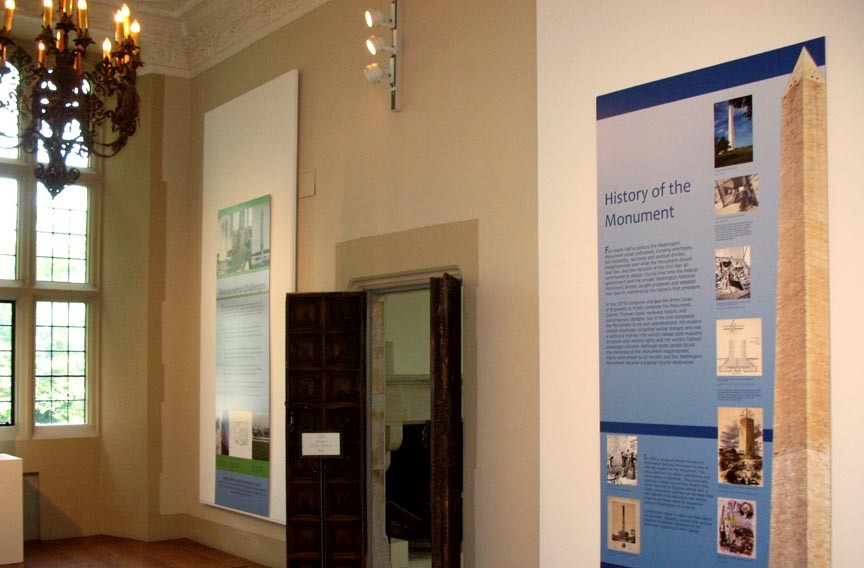 You could ask, "What would George have wanted?" except that it's a safe bet our first president wouldn't have wanted one at all.

The subject is the Washington Monument, which is the focus of the new exhibit at the Virginia Center for Architecture. "Someday in the Park With George: The National Ideas Competition for the Washington Monument Grounds" collects historical drawings, pictures and information about how we ended up with the monument recognized the world over.

The exhibit shows how the monument grounds have played host to any number of unlikely uses through the years, including a cow-covered beef depot and a military base from 1910-'20. During World War II, the federal government erected temporary office buildings along the Mall, including the monument grounds, the last of which weren't removed until 1970.

Visitors see the array of design possibilities suggested through the years but never completed. One was a circular colonnade with a triumphal arch leading to the monument. Another was for the grounds to have been used by the 1892 Colombian Exposition, and although the city didn't win the bid, the plan would have erected temporary fair buildings and manmade lakes on the grounds, inevitably making for a very different landscape had it been completed.

Photographs of people ice-skating on the mall in the early 20th century and Tidal Basin bathers in 1922 provide a simpler perspective on the monument's allure. A drawing of a proposal to construct two elevated roadways along either side of the mall to help alleviate Washington's notorious traffic problems seems inconceivable to the modern viewer.

But the exhibit isn't just about history. The second room showcases the six finalists in the National Ideas Competition, chosen from more than 500 submissions, which allowed anyone in the world older than 12 to submit ideas to improve or redesign the Washington Monument grounds. Two of the winning six weren't even Americans, which shows how compelling and potent a symbol the monument's become internationally.

"The competition was intended to open up the potential of the grounds," says James Clark, chairman of the competition. "We wanted to open people's minds to the potential for a very successful site and continue the conversation of a hundred-plus years. Initially we thought we'd get more of a local response and perhaps nationally, but it has been a cross-section from all over the world."

Clark attributes the widespread response to the competition to the monument being an international symbol of Washington, as well as the far-reaching effects of running a competition online.

One finalist suggested a field of stars with lights mounted in the ground around the monument; their brightness at night would be determined by how much foot traffic walked over them during the day. It's meant to be a metaphor for all people having a say in democracy. Another envisioned a glass-topped, sky-lighted museum surrounding the monument like a bubble at its base. Others address the barren grounds with extensive tree plantings and terraced steps for performances.

All imagine a very different space than the barren grounds, ring of flags and security barricades that define the monument's environs. Visitors to the exhibit can vote for their favorite. "Everybody can have a good idea," Clark acknowledges. "We should listen to the broadest cross-section of people possible." S

"Someday in the Park With George: the National Ideas Competition for the Washington Monument Grounds" shows at the Virginia Center for Architecture, 2501 Monument Ave., through June 24. For information go to virginiaarchitecture.org.